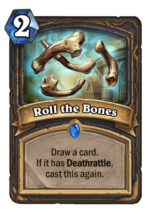 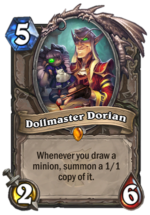 Roll the Bones is your early game win-con, Dorian’s your late game. Not much else to say besides read the guide.

Get the “Death to the Living!” daily quest? Want a few kicks and giggles in wild with drawing 10 cards for 2 mana, as well as constantly having a decent board as a generally zoo-ish aggro hybrid? Look no further than “Unload and Reload”, a deck I’ve been playing in Wild for quite some time.

The deck seeks to optimize early game board control with Zombie Chow and Mistress of Mixtures while attempting to flood the board and abuse AoE board buffs in Lost Spirit and Spawn of N’zoth. The game, however, does NOT simply end once you get to mid game and start topdecking, as Roll the Bones can easily turn the game back to you again. Dollmaster is simply a nice touch, allowing you to create yet another board when combo’d with Roll the Bones.

Nothing much to say besides throw back anything that isn’t Roll the Bones (and at times, Dollmaster Dorian). You will generally have a decent opener in every game you play considering the low curve of the deck, so regardless of your opening hand, you’ll be sure to contest quite well against the more aggressive decks, while flooding the board and giving your control opponents constant threats to deal with.

Coming up with the general deck design came much earlier on, when Roll the Bones was just released. I felt the need to dump 28 deathrattles with 2x Roll the Bones for a guaranteed reload after throwing down a flood of sticky minions. Originally the deck ran higher costs, such as Piloted Shredder and Aya (as well as Jade Swarmer), but I felt like they were a bit difficult to drop considering the floody nature of the deck, urging the player to simply dump three minions instead of one bigger minion. Card draw deathrattles were a thing I wasn’t quite sure about, but the ability to keep digging for your Roll the Bones is always appreciated. You run into Fatigue quite early on (but seek to end the game relatively quickly anyway), so slotting in Kingsbane wouldn’t hurt too badly as a way to lessen the fatigue you may encounter.

Dollmaster came, and I fell in love with the deck. The ability to spend 7 mana on a full board and full hand is extremely satisfying to pull off as well as coming with some built-in synergies with 1/1 eggs and board buffs in Spawn of N’zoth and Lost Spirit.

Hope you enjoyed reading and (possibly) playing the deck! It’s always fun for me to try to find ways to optimize cards such as Roll the Bones and Dollmaster Dorian, and playing around with a theorycrafted non-meta deck which destroys certain meta decks at times is extremely satisfying for me. So ye, have fun, and good luck!