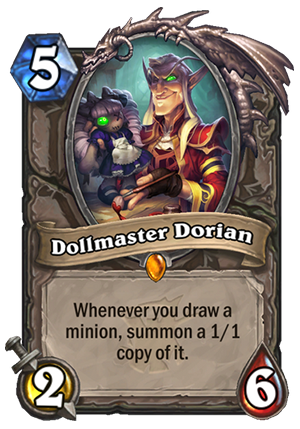 Dollmaster Dorian is a 5 Mana Cost Legendary Neutral Minion card from the The Witchwood set!

Whenever you draw a minion, summon a 1/1 copy of it.

The children were puzzled by the scratches covering the insides of their toy-boxes.
Tweet

I always like to see new mechanics, but I’m not a big fan of this one in particular. It takes the draw RNG to the next level. Not as bad as Barnes, but let’s say that you have 5 great targets out of 20 cards left in your deck. You can either not draw any of them or draw 3 in a row, the difference is going to be massive. But, let’s first rate this card before complaining about it.

You obviously can’t build your deck around this card. It’s only a single card, so you might not draw it. It also doesn’t win you the game right away. So you basically can’t play this + a bunch of cards like high value Deathrattles to synergize. The deck has to work without this card.

And it’s actually quite hard to imagine a deck that would. Realistically you’d want to play this in a deck with BOTH good targets to summon as 1/1 and lots of card draw (or a way to tutor specific card you want to summon).

For example, Aggro Paladin. Or rather, a slightly slower version, some form of Midrange Paladin (maybe the new version of Dude Paladin) maybe? This + Divine Favor would be an insane Turn 8 play. Summoning a bunch of minions, including Divine Shields, or possibly some Deathrattles. Even better if you can draw a Tirion Fordring. However, it’s unreliable, as the combo costs 8 mana and you’d need to be playing against a deck with lots of cards in their hand (while your hand would need to be relatively empty).

In Warlock – you could play this + Sense Demons to get two Voidlords and immediately summon 1/1 copies of them. But it would be useless after you draw Voidlords, it would also make Lackeys useless, making the whole combo very questionable.

Rogue also has some combos. On turn 9, you could play this + either Elven Minstrel or Preparation + Sprint. Elven Minstrel would guarantee two 1/1’s, but then again, Rogue doesn’t really benefit from the small tokens and doesn’t play cards that are good to summon like that. Gadgetzan Auctioneer is one, but now you are left with only 1 mana to work with, not a perfect scenario. Possibly if you run Kobold Illusionist, it could be a way to activate some combos, but that’s a long shot.

Not only would it be very hard to fit into a deck, but it also comes with a downside. You give your opponent lots of information. If it summons a minion – they now know that you’re holding it. It might be a big deal if you get e.g. Sunkeeper Tarim – they will for sure try to remove the whole board now. And if you don’t get anything, your opponent knows that you drew a spell instead, also giving them some form of intel.

This card is really hard to evaluate, as it’s a completely new effect, but I think that it’s leaning towards a “meme” card and not an actual playable Legendary. It MIGHT work in some deck that I didn’t think of, but it would be incredibly hard to find a deck like that. People are looking at the best case scenario too often and ignore the fact that it’s unplayable by itself (5 mana 2/6), you need to combo it with stuff in the late game, it doesn’t really fit anywhere, it’s hard to make work etc. Yes, in the best case scenario you will play this + some powerful card draw in the late game and summon a bunch of strong Deathrattles. But most of the time it will be stuck in your hand and you will question your deck building choices.