Combo Warrior deck has been around ever since the release of Blackrock Mountain (Emperor Thaurissan), which allowed more than 10 mana combos to be used. However, it was rarely a meta deck and Raging Worgen was often just one of the win conditions, not the main focus of the deck. For example, it was used in certain Patron Warrior builds as an additional win condition after the nerf of Warsong Commander and possible Frothing Berserker OTK combos. The most popular list was played by Neviilz and then adapted by multiple pro players. Neviilz achieved rank 1 Legend, followed by multiple other pros placing in top 100 Legend across different servers.

Just like any other combo deck, it will be less successful when enemy expects it and the surprise factor is gone. However, a lot of decks don’t have a way to counter it even if they know exactly what’s going to happen. You can also dust it off whenever people forget about it.

Thanks to Stonekeep for writing this guide for Hearthstone Top Decks!

Mulligan is similar no matter what class you face. Overall you want to throw away all the combo pieces (because they’re useless in the early game) and then prioritize early game removals followed by early game minions. Highest mulligan priority: 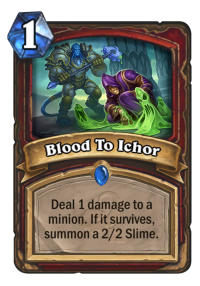 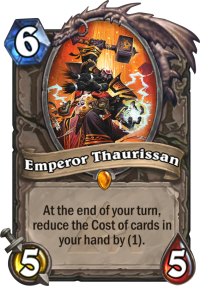 Combo Warrior’s general strategy is very simple. You want to stall the game long enough to draw your combo pieces, possibly activate them with Emperor Thaurissan if you need to, and then kill enemy in a single turn. To achieve that, there are two things you’re concerned about – you need to survive and you need to draw a lot of cards.

Survival comes in a form of removals and Armor. Basically, you want to kill every minion enemy plays and then refill your health with Hero Power and Shield Block. It’s vital to know the popular meta decks and know what opponent is probably playing based on the first few cards you see. Then you know what cards you can use and what cards you absolutely need to keep. A good example is Execute – facing a faster deck, it’s often a good strategy to use it on a 3-drop if it’s particularly threatening (e.g. Darkshire Councilman), because enemy doesn’t run a lot of bigger minions anyway. But if enemy deck is notorious for playing big Taunts, e.g. Ancient of War in Druid or Twin Emperor Vek'lor in C’Thun decks, you really need to save Execute for those and using them early is a big waste. 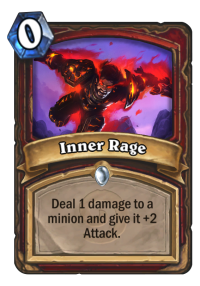 Knowing your matchups well will also allow you to utilize some of the combo pieces pre-combo. For example, Inner Rage is a vital combo part, but against an Aggro deck you don’t realistically need EVERY combo card to win the game – your survival is way more important. So it’s okay to clear that 2/1 minion with this spell instead of taking 2 extra damage each turn. Just like it’s okay to use Rampage on Wild Pyromancer/Acolyte of Pain for more AoE damage/card draw respectively. Keep those combo pieces only if you’re close to using the actual combo already.

Your second main focus, after surviving, is card draw. You want to maximize it – in order to close the game as fast as you can (because you’ll run out of ways to remove opponent’s stuff eventually) you want to draw a lot of cards. On the other hand, the deck runs so much card draw that you don’t have to be greedy with it and get maximum out of every card. Dropping an Acolyte of Pain just to draw 1 is okay. You also aim to draw 2 from Battle Rage – more is obviously better, but the deck is very low on minions so it might be hard. If you have nothing else to do, cycling a Commanding Shout or Battle Rage for just 1 card is also okay most of the time. 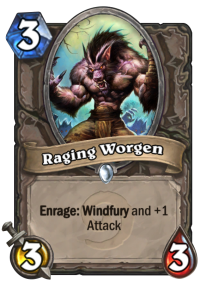 Once you draw everything you want, it’s time to unleash the combo. The deck runs 7 combo pieces, costing a total of 15 mana. It means that if you want to play the whole combo, you need an Emperor Thaurissan proc on everything besides Inner Rages (because those are 0 mana anyway). This, however, is only necessary in extreme situations – matchups against Control Warriors that can accumulate a lot of Armor. In other matchups, you rarely need more than 4-5 combo pieces. The general rule is that you aim to hit those 3 cards with discount proc – Raging Worgen, Charge and/or Faceless Manipulator, because those are most vital parts of your combo and you can’t play all of them without discounts. When it comes to non-combo cards you want to hit, Wild Pyromancer and Commanding Shout are the best ones, as they allow to start a big AoE board clear, usually combined with card draw too. More about combos in the next section.

Once you get both Raging Worgen and Charge in your hand, you should start counting for the possible lethal damage every turn. In most of the matchups, opponents might even take some damage and you don’t full combo to kill them. E.g. your Loot Hoarder might connect with their Hero, they might take some damage by using weapons to remove your minions, you might hit their face with Fiery War Axe for extra 3/6 damage if necessary or if you face Warlock they might damage themselves with Hero Power. It’s very common that enemy is down in the 20-25 health range, and you don’t need much to kill him at that point. It’s very easy to miss lethal with this deck, so be cautious and take your time every turn. 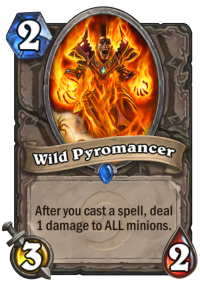 Besides your main win condition – the Worgen OTK combo – the other big combo is Wild Pyromancer + Commanding Shout. While this one isn’t that strong by itself, it’s a base for much more. Commanding Shout, besides dealing 1 AoE damage immediately, makes your Pyromancer immune for the rest of the turn. It means that you can cast as many spells as you want and the minion won’t die – so basically you can deal a lot of AoE damage. It serves as the mid/late game board clear. It’s very easy to deal 5+ AoE damage and completely clear opponent’s board.

The previous combo synergizes very well with Acolyte of Pain – you pretty much guarantee drawing 3 cards from it if can afford to throw it on the board. It also works very well with Battle Rage, because it puts all your minions at 1 health, but doesn’t kill them.

Acolyte of Pain also synergizes with self-damage abilities. Opponents will usually try to kill him in one blow, so you won’t draw more than a single card. It means that you want to try to damage it yourself to cycle more. There are a lot of ways to do that in your deck (besides Wild Pyro that was already mentioned) – Inner Rage and Cruel Taskmaster (remember that you need at least one of them as the combo activator), Blood To Ichor, Ravaging Ghoul and even Slam (although it caps the card draw at 2). If you face a matchup where you don’t need a big combo, but you absolutely want the board presence and card cycle, you can use Rampage to buff damaged Acolyte. Inner Rage + Rampage combo turns him into 6/5 minion, which is pretty threatening and might draw you a lot of cards. 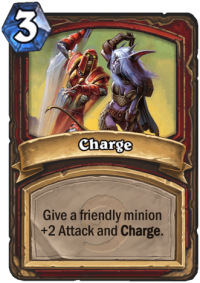 Then, we have the main OTK combo. The most basic combo requires 3 cards – Raging Worgen + Charge + an activator. Activator is a way to damage your own Worgen in order to proc the Enrage, giving him Windfury. Inner Rage and Cruel Taskmaster are best activators, but Slam, Wild Pyromancer or Ravaging Ghoul can also fill this role sometimes. Thus, probably the most basic combo is Raging Worgen + Charge + Inner Rage. It costs 6 mana and deals 16 damage. Then you might fill this combo with other attack buffs in order to increase the damage.

Most damage you can deal with your combo is 60: Raging Worgen + Charge + 2x Inner Rage + Rampage + Cruel Taskmaster + Faceless Manipulator. The most damage you can deal without any Thaurissan procs is 30 – you play out the full combo without Faceless Manipulator. While it’s usually enough, you need to draw all the 6 cards and not use ANY combo pieces before. Faceless Manipulator, even though it requires Thaurissan to work, adds more flexibility to the deck. Not only you don’t need to draw every single combo piece, as even the basic combo + Faceless is already 32 damage (and only 4 cards), but you also might use some of the combo cards for other purposes. Faceless also allows you to stand a chance in Warrior matchups, because without it you it would be impossible to win the game as long as they stay above 30 health (which is very easy for them). Warrior is still the hardest matchup, but Faceless makes it at least winnable.

When it comes to budget card substitutes, there aren’t any. The deck is already very cheap – it mostly runs classic common/rare cards. Emperor Thaurissan is a reward for the first wing of Blackrock Mountain, so it’s very easy to get. And the only epic in the deck is Faceless Manipulator. Both of them are absolutely necessary for the deck to work on the competitive level. While you might play the budget version without Faceless and Thaurissan, your combo damage will be capped at 30 (which means that some matchups are simply unwinnable) and it will require every single combo piece to pull off. 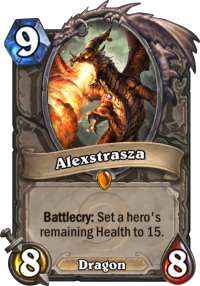 On the other hand, you might try adding some tech cards to your deck. If you face a lot of slow matchups, Alexstrasza should be a good choice. Assuming enemy will be at 25+ health by turn you play her, Alexstrasza’s Battlecry is going to deal 10+ damage to the enemy. It softens him enough to put in the range of even the most basic combo. It’s best against Warriors, because of how the matchup looks like. Warriors often stay at or near full health, because Armor mitigates most of the damage. In that case, Alex might immediately deal 15 damage and possibly put Warrior into the range.

Against weapon classes, Harrison Jones or Acidic Swamp Ooze are both solid choices. Ooze is more of a defensive card in that case. It’s best against Aggro decks that rely on weapons to kill you – e.g. Pirate Warrior or Aggro Shaman. In some cases it might even buy you a few turns – for example, destroying Doomhammer usually heals you for 12 or more. It’s also a budget choice. But Harrison Jones should fit this deck even better, because you really want that extra card draw. Besides, just like Ooze, being a good way to save yourself a lot of health, it also gets you closer to your win condition, Armor gain or other removals.