Our Lady in White Control Priest deck list guide will go through the ins-and-outs of the potentially viable deck from the The Witchwood Expansion! This guide will teach you how to mulligan, pilot, and substitute cards for this archetype! For now the deck guide is theorycraft, but as soon as the expansion goes live we will start updating it right away! 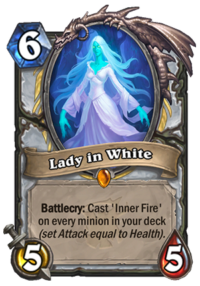 Even though Priest was dominating the meta through a significant part of the Year of the Mammooth, we can’t just assume that the trend will continue. Year of the Raven takes away a lot of Priest tools. Starting with one of the most powerful cards ever printed, Drakonid Operative, two very strong board clears (Dragonfire Potion and Shadow Word: Horror), as well as multiple anti-Aggro and combo tools – e.g. Potion of Madness, Kabal Talonpriest and Priest of the Feast. Losing so many powerful card will have a huge impact on the class overall.

However, one of the Priest cards from The Witchwood caught my attention – Lady in White. I’ve seen lots of theorycrafting trying to build entire deck around it, but I think that’s a wrong approach, because in that case, your entire deck will be rather weak in case you don’t draw her. Instead, I’ve tried to build a more classic Control Priest shell with an addition of Lady in White. Not every card benefits from her – for example, Duskbreaker or Elise the Trailblazer will have the same stats after Lady in White, but most importantly, no minion will get weaker, and lots of them will get stronger. Main advantage of Lady in White is that after you play her, most of the minions you draw will be better. 3/3 Northshire Clerics, 8/8 Primordial Drakes and 5/5 Tar Creeper should be very useful.

While this might not be the best build available, and I’m quite sure that we’ll need to optimize it a lot, it feels like a good starting point.

Since it’s just a theorycraft, I won’t post a precise mulligan guide, just some guidelines. Probably the most important question is – do you always keep Lady in White? In slow matchups, yes, you do. But against Aggro, you want to mulligan her away. Not only having a 6 mana card in your opening hand is bad, but Lady in White has no immediate impact at all. It’s a 6 mana 5/5 that might take a few turns to pay herself off, which is way too slow against Aggro.

Northshire Cleric and Radiant Elemental are the obvious package you always want to keep (+Power Word: Shield if you have a nearly game minion too). Stonehill Defender is a solid keep in any matchup too, while Tar Creeper is a good keep vs Aggro.

Against Aggro, you also want to keep one of your AoEs – Duskbreaker should be a great keep. Auchenai Soulpriest + Circle of Healing is also a great combo to keep vs Aggro, however, it’s hard to say whether you should keep individual pieces. I’d say that unless you play against a deck where you absolutely need to AoE it on Turn 4 (e.g. Murloc Paladin) or else they snowball hard, you want to keep one of the combo pieces and hope to draw the other one.

This is a Control deck, so your general strategy is to control the board and try to go for the late game, where you can outvalue your opponent. 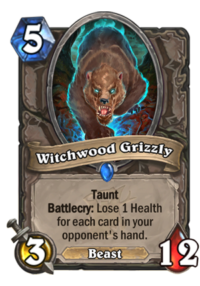 Against Aggro decks, your general game plan is to simply survive. The deck runs lots of anti-Aggro tools in form of AoE clears, Taunts etc. Those cards are usually very efficient – they can clear 2-3 cards for the cost of one, so you will eventually start gaining card advantage. Once you either stabilize on the board, or you run an Aggro deck out of cards, you should win the game. One card I want to highlight is Witchwood Grizzly. Unless you face an Aggro Paladin that will get a great Divine Favor right before Turn 5, Grizzly should drop as something like a 3/9 or 3/10 on average.

In Aggro matchups, Lady in White is mostly useless. If you’re ahead and you can afford to spend 6 mana playing her, go ahead and do it, but she will rarely win you the game. When you’re in a comfortable position like that, you’re usually ahead and you’re most likely winning the game anyway, even without her.

As you can see, the deck is heavily anti-Aggro – with majority of the early and mid game cards made to fight off a fast deck. So how do you win against another slow deck? Unlike against Aggro, in case of Control decks, Lady in White is going to be your main (but not only) win condition.

After dropping Lady in White, a big chunk of your deck is going to get significantly stronger. In this specific build, there are 17 minions that are going to benefit from her in some way, and that’s already a really good win condition. Remember that Control decks run a limited number of removal cards, and if you turn over half of your deck into significant threats, then it might be hard for your opponent to keep up.

Just to give you an example – if you play a Control deck and your opponent drops a Tar Creeper, you can often just ignore it. It’s going to hit you for 1 per turn, which is pretty much nothing. However, if that Tar Creeper was a 5/5, you’d have to kill it right away. That’s the main strength of Lady in White. It turns lots of cards that are normally anti-Aggro into big threats vs Control. Another great example is Witchwood Grizzly. It might seem like the card is just bad against Control, and you’d be right. It’s often going to be a 5 mana 3/5 or something (assuming 7 cards in your opponent’s hand). However, after you’ve already played Lady in White, its attack jumps up to 12, meaning that you can drop it as a 12/5. Your opponent will absolutely have to clear it right away now. 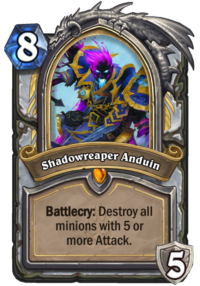 However, Lady in White is only a single card in your deck, so you won’t always draw it. The deck has some other win conditions, other ways to gain value in the late game. There’s the good old Elise the Trailblazer, which shuffles an Un’Goro pack into your deck. Thanks to Shadow Visions, you might be able to pull out multiple copies of those pack (up to two extra copies, but even one is great) – that’s a lot of extra value in total. Then, the deck also runs Ysera, which, if not removed, can gain lots of value. Similarly, the new Nightscale Matriarch can be a pain in the neck if it stays on the board. Stonehill Defenders can pull some big Taunts, possibly even something like The Lich King. And finally, Shadowreaper Anduin is a sort of a win condition by himself too. If you face a deck with limited amounts of healing, you should be able to deal 2-6 damage per turn to your opponent, or you can just use it to control the board.

Depending on the meta, you will obviously be able to run some tech cards. For example, if you need to add another anti-Control win condition, running Mind Control might be correct. You could also tech in Silence or weapon destruction if the meta demands it. However, I didn’t want to put any of those tech cards yet, because it’s hard to predict how the meta is going to shape.