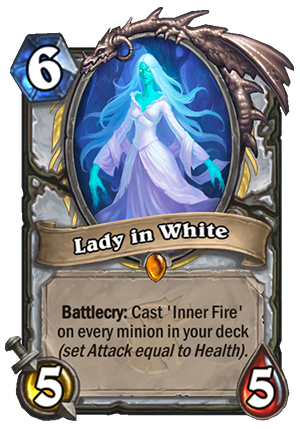 Lady in White is a 6 Mana Cost Legendary Priest Minion card from the The Witchwood set!

Battlecry: Cast 'Inner Fire' on every minion in your deck (set Attack equal to Health).

She was a lady in polka dots until the gnomish laundromat incident.
Tweet

Cards Relating to Lady in White

While this card will definitely require some clever deck building to take full advantage of it, the effect is insane. Priest, a class that doesn’t have to play for tempo, can easily afford to run a slower card like this. Some compare it to Shaman’s The Mistcaller, but I have to disagree. Mistcaller has worse stats (4/4 and 5/5 is a significant difference), and to be fair, a worse effect too. It always gave you flat +1/+1 on all minions. This one is better in a way that thanks to deck building, you can make the effect much better. For example, you put a Stonehill Defender into your deck. Would you rather have a 2/5 Taunt (Mistcaller) or a 4/4 Taunt (Lady in White)? Yep, the second one is much better. Or let’s take an even more drastic example – Ysera. 5/13 vs 12/12 – the second one is a clear winner.

The comparison is also about the context of those two classes. Slow Priest decks have low tempo and Control Priest already has tons of great cards. Control Shaman wasn’t great, didn’t play enough minions that would benefit from the effect heavily, and faster Shaman decks didn’t want to play Mistcaller, because it was too slow.

Priest is well known for playing high health minions, because they already synergize with the class play style and Hero Power. However, this won’t be a case of “just slap it into any deck and it will work” Legendary – it’s hard to deny that a 6 mana 5/5 with no immediate effect needs to have a solid payback to be worth including. Just buffing a few minions in your deck is not enough, especially since it does not affect your hand, so you still have to draw them. It also doesn’t work on minions summoned through cards like Free From Amber.

But, just to give you a few examples of solid minions that have a higher health than attack and can fit into a slower Priest list: Northshire Cleric, Radiant Elemental, Stonehill Defender, Tar Creeper, Tortollan Shellraiser, Primordial Drake, Obsidian Statue, Ysera. Heck, even Doomsayer would be interesting. You would be able to play it against your opponent with a board that can kill it – instead of just soaking 7 damage it would also kill some minions as well. I could have missed something, but that’s already lots of minions that would get buffed, most of them significantly. I didn’t count the ones that are rotating out like Priest of the Feast or Book Wyrm, but that obviously would be something to consider for the Wild.

I’ve heard some people saying that you can even play Oasis Snapjaw or Mogu'shan Warden – yep, they would become 7/7 (4 mana 7/7 LUL), which is great. But a card like that is unplayable BEFORE you play Lady in White, which means that it wouldn’t fit into such a deck.

Also, we need to remember that it would reduce the attack of minions with higher attack than health. Priest isn’t really known for running such minions, but it happens sometimes – e.g. Wild Pyromancer or possibly Bone Drake in a Dragon deck. In those cases, it’s just 1 attack, but it might be quite a big deal in the future if e.g. a 6/3 minion Priest wants to play would be printed. Edit: I just realized that it would make Twilight Drake useless – it would get reduced to 1 attack. See, that’s the thing, this effect is not always positive and you will need to think hard to come up with a perfect list. NOT a list built 100% around it, because it would probably be terrible if you don’t draw it. Just a list that would benefit most from this card while keeping a solid win rate if you don’t draw it. Something like Prince Keleseth in a way – it improves the deck, but you can still easily win without it.

All said, I feel like this card is very powerful. Maybe not “10/10 busted, auto include” powerful, but for now it looks very strong. 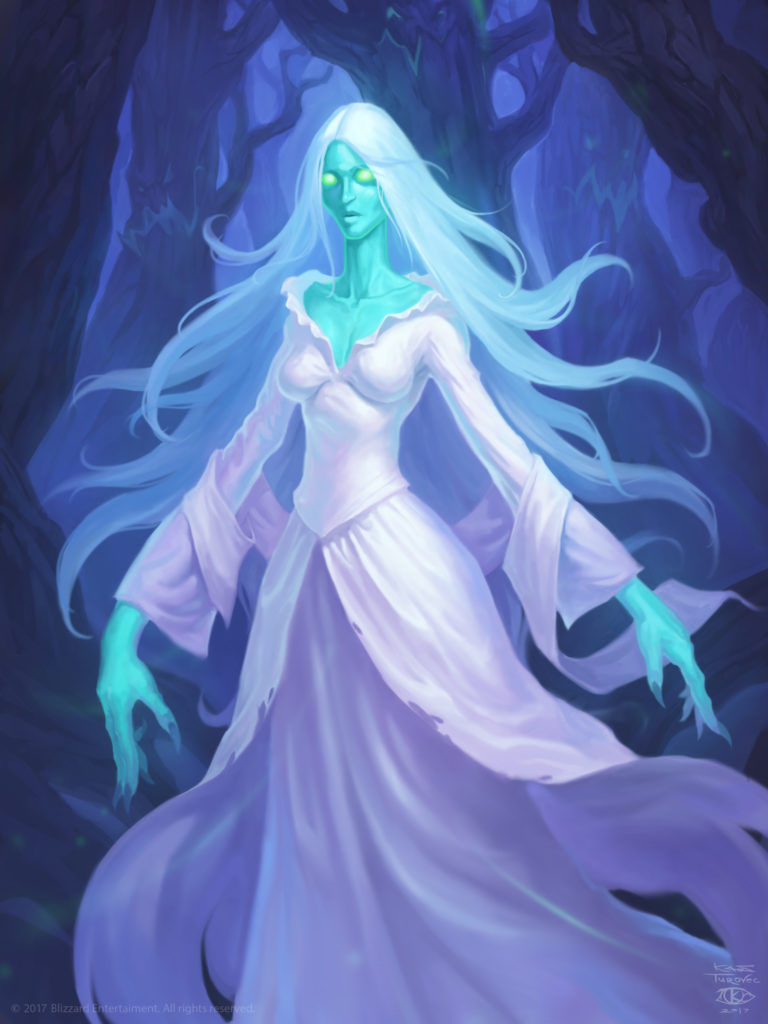