Just when we thought we might be safe from Secret Paladin, Jambre has created a list that got top 10 on the EU Legendary ladder! The deck is fairly light on Secrets, and is reminiscent of Jambre’s previous Egg Secret Paladin that he piloted during the EU Winter Prelims! Thanks to Jambre for allowing us to re-host his deck and guide, check him out on Twitter here.

Hello, in the May season I finished top 10 on EU using exclusively this deck, and was top 10 on NA all day until the last half an hour when I decided to try for number one but unfortunately lost a game. 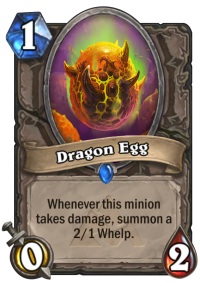 With this deck you want to be controlling the board as much as you can whilst making your board difficult to remove to maximise your 4 mana buff cards (Keeper of Uldaman, Defender of Argus, Blessing of Kings).

This deck should use it’s hero power very often and try to maintain board control, being ahead by just a 1/1 can be very threatening because of abusive and the 4 mana buff cards.

Unlike Nerubian Egg, with Dragon Egg you want to keep it alive and buff it so it can spawn multiple 2/1s. E.g. You have an Abusive Sergeant in hand, and a Dragon Egg on board vs a board of a 1/1 and a 3/2. It is generally a better play to buff the Dragon Egg and trade into the 1/1 rather than the 3/2.

Vs pretty much everyone you want to be looking for the cards: Argent Squire, Dragon Egg, Rallying Blade. If you have some of these already you can keep Abusive Sergeant. Abusive Sergeant is fine going first for the most part, particularly vs Rogue and Hunter.

Your main objective for the first few turns is to have something on board ready for your strong 4 mana plays. Try to make removal awkward for your opponent and utilise hero power. If you are on 2 mana and have a 1 drop in hand, it may be a better play to hero power t2, and then 1 drop + hero power t3.

The decklist displayed was slightly teched for a Warrior heavy meta. If you are facing lots of aggro decks, particularly Pirate Warrior and Zoo I’d recommend: -1 Avenging Wrath, -1 Steward of Darkshire, and +2 Flame Juggler. 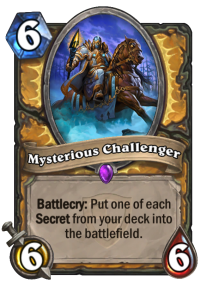 Why do you run only 3 secrets but 2 mysterious challengers?

Generally the secrets are not that good early game with a few exceptions. By only running 3 secrets you are less likely to draw them before you play Mysterious Challenger. By running 2 Challengers you are more likely to have a Challenger on t6. Yes, you get the odd game where you draw all your Secrets before Challenger but it is rare. If you’ve already played one challenger the second one is almost a Boulderfist Ogre, which is fine in the late game!

There aren’t many good 2 drops currently, and the best one (Flame Juggler) tends to matchup poorly vs most non-zoo decks (Totem Golem, Fiery War Axe/Fierce Monkey, 3/3s from Rogue). Often you will need a Weapon to finish off these minions, and a 1/1 from your Hero Power tends to do the same thing as a 2/3.

Why steward with only abusive and hero power as activators?

Steward of Darkshire can give your board stickiness. It also has synergy with Dragon Egg, causing it to spawn 2/1 Divine Shield minions, and with Noble Sacrifice + Rallying Blade. A 1/1 Divine Shield on it’s own is a threat in this deck. Playing her alongside an Abusive Sergeant is fine on it’s own. 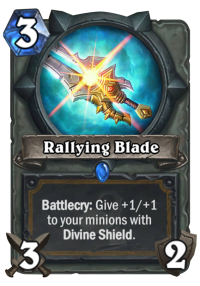 Weapons are your friend in this matchup. Rallying Blade can kill SI:7 Agent and Earthen Ring Farseer with one swing on curve, and can kill Tomb Pillager/Azure Drake with the help of a 1/1 or Keeper of Uldaman (turning their minion into a 3/3). Truesilver Champion kills almost all minions in the Rogue deck. If you are going first and play a 1 drop Rogues will generally pass their turn 1 rather than coining out their weapon. For example with our weakest t1 minion, abusive, it usually goes like this: T1: H-abusive V-pass; T2: H-hp V-hp > Kill 2/1; t3 H-1 drop+hero power or 3 drop V-kill 1/1 play 3 drop/Tomb Pillager. After this sequence we are pretty much guaranteed to have a minion/initiative going into our strong t4. Vs Rogue you should try to spread reasonably whilst avoiding weakness to Fan of Knives. Sap is one of the ways rogue can get back tempo. If you have a lone minion, playing Blessing of Kings on it might not be as wise as playing a less mana efficient play which spreads your board. After t6/7 you should start pushing face damage more often rather than clearing every rogue minion. Rogue WILL get off a big turn with preps/auctioneer eventually. At this point you shouldn’t play for board but rather push face and try to finish with weapons/Leeroy Jenkins. You will often be close to 30hp at this point so you have several turns to set up lethal.

If you teched in Flame Juggler this matchup should be easier. This matchup is all about board control. You need to take value trades as often as possible. It’s often better to have multiple spread minions rather than one single larger minion because of cards like Power Overwhelming and Abusive Sergeant. What’s more is that Zoo has many smaller cards which you can value trade into, having more minions means you have more value trades per turn. Zoo is better at getting the board early than this deck so it’s often that you’ll fall behind. The weapons are good because zoo cannot really interact with them, and a well timed Consecration can just end zoo. Zoo has no real ways of getting back onto board, so once you stabilize with this deck you have pretty much won. Because most of the minion combat is done with small hp creatures getting buffed, high attack creatures from the opponent aren’t as threatening, similarly high attack creatures on your side aren’t as threatening either. For example, if the opponent has a Darkshire Councilman on board, you shouldn’t forgo good value trades to kill off the ‘threat’ of him without good reason. Sometimes after a Mysterious Challenger you can ignore Zoo’s board as they will likely have tapped a few times and killing off his board with a lone 7/7 is far too slow. You can sometimes steal wins with burst from weapons/Leeroy Jenkins this way.

Usually a good matchup as our midgame is a lot stronger than the Warriors. Our weapons tend to have better trades than his (often has to use his on 1/1s) and it’s fairly easy to maintain a board. Ravaging Ghoul can hurt you but it dies to both weapons in one hit. Tempo Warrior has a hard time coming back onto board, and doesn’t do well vs Noble Sacrifice, particularly when it comes from Mysterious Challenger. I think the matchup is relatively straight forward to play, just be wary of Ravaging Ghoul.

Brawl really hurts this deck as it tends to spread out smaller minions without Deathrattle. Board control is guaranteed for the whole match pretty much, which is really nice for a deck reliant on it. Cards like Tirion Fordring and Avenging Wrath help for finishing the Warrior, as you tend to get close to killing them but need that extra push. If you get into a position where you have a strongish board that NEEDS a Brawl to clear it, it can be wise to hold back on putting extra things on to the board. One or two extra rounds of face damage with a middlish board can be just enough face damage to secure the match in the end. With practice you will find the right balance between being fast enough to kill them before they get too much time for Justicar Trueheart, but not overcomitting to a brawl. Don’t be too fixated on this though, sometimes when the opponents HP is too high, you just have to push all-in in hopes they don’t have a brawl to have a chance of winning.

Your hero power beats the Shaman one. Because of this fact, the slower midrange lists tend to be a better matchup for this deck, even though they run Lightning Storm. The face variant runs Sir Finley Mrrgglton which matches up super well vs our early game, and gives them a much better hero power almost always. Rallying Blade is really good at killing Tunnel Trogg, Flame Juggler and Feral Spirit/finishing off Totem Golem so it is a premium card in this matchup. Dragon Egg/Argent Squire + Abusive Sergeant is a powerful combo for staying on board in the early game. If you can survive the shamans first few turns you should be fine. If you can get something to stick into t4, uldamann provides really good value trades with most of the shaman minions. Generally once you make it to the midgame you should pull ahead fairly easily. The 4 mana 7/7 isn’t great vs this deck as we have two great answers in Aldor Peacekeeper and Keeper of Uldaman.

Both decks do similar things but we just have faster cards. Savannah Highmane and Call of the Wild are too slow to win. If you correctly pressure face enough with this deck, they shouldn’t be a problem. Don’t go out of your way to kill beasts to prevent Houndmaster. Often a Houndmaster will open themselves up a consecration the turn afterwards, and you can follow the age old mantra of ‘they have to have it’. Luckily our 6 drop is a lot better than Highmane, and Noble Sacrifice is hard to deal with as a Hunter outside of Unleash the Hounds. Argent Squire is usually a better play t1 than Dragon Egg, as it often keeps the divine shield going into your t3 sword.

Our weapons/Consecration kill their minions pretty well and they are left playing catchup for the rest of the game. Dragon Egg can make Flamewaker/Arcane Missiles a little bit awkward, and with things like Mysterious Challenger, Blessing of Kings and divine shields we can make our board resistant to a Flamestrike by t7. Strong Mana Wyrm starts can be a problem but you can shut them down with weapons. As most of our cards are either small or do something when they enter the battlefield, cards like Fireball and Frostbolt lose a lot of their value. By playing weapons you kill the Mage’s minions whilst preventing them any targets for their spells, because of this and the general stickiness/spread nature of our cards it is hard for the Mage to get ahead.