Our budget Zoo Warlock deck list & guide for the Darkmoon Faire expansion will teach you how to play this budget list. This guide includes Mulligans, Gameplay Strategy, Card Substitutions, and Combos/Synergies! 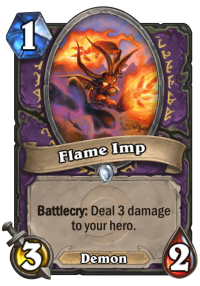 Zoo Warlock is one of the oldest archetypes in Hearthstone, dating back to the early 2014, shortly after the game’s official release. Of course, it looked quite different back then, but the basic idea behind it remained similar throughout the years. Your goal is to play efficient, low cost minions that can trade well to gain tempo, and then refill your hand with Hero Power. The latest version of Zoo was created in Scholomance Academy, although a nerf to Darkglare has set it back by a bunch. Originally it was based heavily around self-damage and synergies, but right now it just plays a bunch of different things – some Discard synergies, some self-damage synergies and even a Demon synergy. Because it’s a budget version, we had to choose between Darkglare and Flesh Giant. Before the nerf, I would pick Darkglare each time, but now I feel like Flesh Giant is the better choice. However, if you own the other one (or even a 1/1 split), you can just sub it, since their overall power is similar.

When it comes to new Darkmoon Faire additions, the most important one by far is Wicked Whispers. Zoo Warlock LOVES AoE board buffs, since the deck is built around flooding the board with multiple efficient minions. Discarding the lowest cost card is not a big price to pay given how much the deck can draw. Then, we’ve got a small Demon package – Midway Maniac and Man'ari Mosher, as well as the new Aggro staple – Wriggling Horror. All in all, the deck is quite close to the full build, and it won’t cost you a lot of Dust to upgrade it. Zoo Warlock is in a weird position in the meta – the deck is not really bad, but it’s unpopular, so it’s hard to say where it will go later into the expansion. 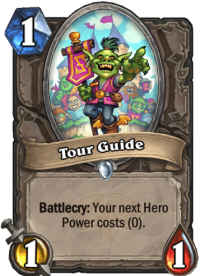 The base idea behind this deck is simple, like I’ve said before the concept is years old now. You want to get on the board quickly, then keep refilling your hand, keeping the board clean, while smacking your opponent in the face at the same time.

Against Aggro, tempo is absolutely key – you have zero comeback mechanics against wide boards, so if you lose control, you will most likely just lose the game. That’s why you don’t want to focus on slow plays like drawing more cards – you want to play minions quickly so you have something to trade with at all times. A good example would be choosing the T1 play – Tour Guide is great, but it’s only a 1/1, making it a sort of not ideal choice against other aggressive decks. So if you have it, you’d much rather drop a Spirit Jailer, which doesn’t draw you a card, but is 1/3, which means that it won’t get killed so easily and you might be able to trade it into something. Or even Flame Imp, which deals damage to you, but it can save you more health in the long run by winning you the early board. 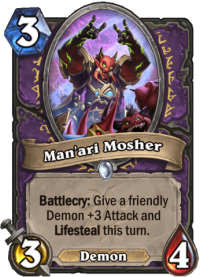 Another thing is conserving your health – normally it’s the thing you should be doing against Aggro, but it’s not easy in this deck. Sadly, unless you get really ahead, you can’t think about it. It makes the deck pretty weak against burn-oriented or “face” decks, but you can’t help that – if you start avoiding any self-damage, you will just lose. You have to ignore it and hope that the extra tempo that comes with that will get you back. The best way to preserve health is to actually use your self-damage effects to get a head on the board and then trade with minions. Try to not let your opponent attack your face. For example, using Soulfire just to deal with a small minion is something you will have to do from time to time even though it costs you an extra card – but your life & board control is more important. Luckily, the new builds run a way to heal up a bit – Man'ari Mosher. The card works really well in Aggro mirrors – not only it has solid 3/4 stats for 3 mana, but it can make your small Demon trade up AND heal you by a bit. The worst case scenario is your 1 Attack Demon healing you for 4, and that’s what you will have to go for a lot of the time. Don’t get too greedy, but if you can afford to, you can try comboing it with a higher Attack Demon such as Flame Imp (6 healing) or Nightshade Matron (8 healing). 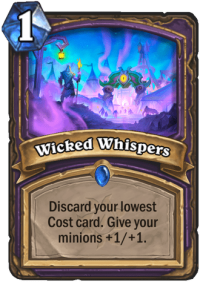 Against Control, your play style is quite different. You’re in the lead from the get-go – they don’t really play that many early game minions and even if they do, they’re not too threatening. You play proactively, they play reactively. This time, while you still want to stay on the board all the time, you don’t need to go all-in. You have to balance between tempo and value – if you go all in and run out of cards, your turns will be quite weak. Your main enemy are AoE board clears – it’s important to know the matchups and learn to avoid them. Of course, you can’t stop your opponent from playing them, but you can go into your opponent’s key turns knowing how much AoE damage they can deal. For example, if you’re going into Warrior’s Turn 3 you know that they can drop Bladestorm from now on – so it’s a good idea to set up a board in the right way so it won’t clear everything (e.g. having three 3 health minions is a bad idea – try to diversify as much as you can, or AT LEAST drop a lower health minion if you already have 2-3 minions with the same health). Similarly, when you play against Soul Demon Hunter and you know that they might drop Shardshatter Mystic, dropping more 1-3 health minions is counterproductive – try to either play some higher health minions (4-5) OR – which is a good advice against many other AoEs too – buff your board out of the range. In this case, you can drop either Wicked Whispers or Wriggling Horror to get your 3 health minions up to 4, out of range. But you can e.g. do the same for your 2 health minions against Paladin’s Consecration or Priest’s Breath of the Infinite. 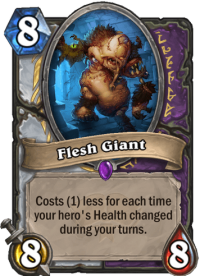 Your main win condition against slow decks (other than rushing their face when they draw no answers) is Flesh Giant. Since you take a bunch of self-damage (and heal up sometimes), you should be able to get it to low mana cost quite quickly. But before you do it – there’s one interesting combo that works amazingly well vs Control – when the Giant is still expensive, you might drop Expired Merchant to get more copies of it. Having access to three in total instead of two might make a big difference, but after you make it cheaper, it will be much harder to target it. Control decks will already be busy with dealing with your board and – frankly – most of them focus more on AoE removals right now, so they might struggle in terms of single target removal (and even if not, they might use it earlier on Matron, for example). In the best case scenario, you combo your Giant with Animated Broomstick to clear a minion, this way even if it gets removed, you at least got some value from it first. It’s a similar story against Aggro – you prefer to combo it with Broom, because sadly – an 8/8 without immediate effect might be too slow at times.

I know that it’s super obvious, but in case you haven’t played or faced Zoo Warlock in a while, the deck can cycle really well thanks to Hand of Gul'dan. You – of course – want to discard it. The best case scenario is Nightshade Matron on T4, since it’s both a high tempo and value play (it’s essentially a 4 mana 5/5 with Rush that draws you 2 cards). Alternatives include Expired Merchant (but since it also gives you two extra copies back, it might be too much in certain cases), Soulfire (but it’s random) and Wicked Whispers (but Hand usually has to be the last card in your hand besides Whispers). 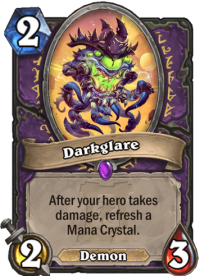 To be honest, like I’ve mentioned at the beginning, the full deck doesn’t require a lot of expensive cards. In terms of Epics, Darkglare is the only one you REALLY need – and it’s honestly the only other expensive card you really want to have in this build. Seriously, you can just replace 2x Midway Maniac with it and you’re set. Darkglare is good, because it gives you extra mana whenever you deal damage to yourself. During mid game turns, it can actually refill you more mana than it costs, making it 0 mana 2/3 PLUS some extra free mana on top of that. Some versions also play Revenant Rascal and you COULD try fitting it in, but it’s not nearly as important. It’s mostly used to slow down Control decks, but I’m not a big fan, because they aren’t your main concern anyway – Aggro is worse. But if you keep facing slow decks, then you should considere it.

But, if you want to add some extra power to the deck, you should also consider Kanrethad Ebonlocke. It’s already okay by itself – 2 mana 3/2 that makes multiple cards you play cheaper (e.g. you can combo it with one of your 1 mana Demons immediately). Then, later in the game, it serves as an extra board refill – honestly just getting a 7/6 (Kanrethad Prime), 5/5 Rush (Matron) and a few smaller minions is great – especially vs slow decks as another board refill after they’ve AoE’d.