The dream of a Pirate based deck had been around for a while in early Hearthstone, but I don’t think many players knew what they were bargaining for when Patches the Pirate burst out onto the scene with Mean Streets of Gadgetzan. Pirates had a long reign and remained a high meta deck until the nerf to Fiery War Axe during the Knights of the Frozen Throne meta.

Sadly for Pirate Warrior there continues to be very little for it in the budget department. The nerf to Fiery War Axe was actually most felt by the budget version of Pirate Warrior because you are already lacking Patches the Pirate which is a pretty big problem, but now you are often left with awkward turns where your curve has a tendency not to line up. One of your better combinations was Pirate, Axe, into Bloodsail Cultist, but that combo is much harder to pull off now. You’ll often be forced to just play Cultist without getting the buff.

Kobolds and Catacombs brought nothing to the deck in the cheap Neutral department. No cards really support the archetype, and the only real change to the meta version of Pirate Warrior is the Spiteful Summoner and Lesser Mithril Spellstone package. It’s too early to even know if these cards will continue to see play in the deck, so I would not recommend crafting the Summoner and even if you have it do not put the Mithril Spellstone in the deck without it.

On the Warrior side of thing there’s just nothing that helps this budget version. Kobold Barbarian is something we tried, but it attacks randomly at the beginning of your turn and doesn’t allow you to attack with it. This means you are completely at the mercy of the card, and while it can dodge taunt it can also attack something you don’t want to be attacking. 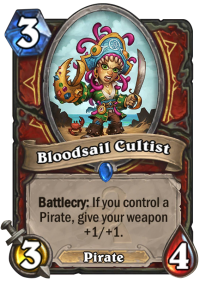 This deck is fairly straight forward, but it’s always important to note that you shouldn’t just always go to the face. If your opponent gives you a good trade you should take it, and this usually involves using your early game weapons. Your minions do damage every turn, but your Weapons run out eventually. It’s usually best to use your health as a resource and remove opposing minions rather than trade your own.

Speaking of health as a resource, you don’t want to be hero powering a ton in every matchup. You are running Mortal Strike which can be a very useful tool at getting a mid-game lethal, but if you are armoring up too often you’ll never enable the upgraded damage part of the this spell. This is a bit more of an advanced tactic, but if you aren’t in danger of getting burst down then there will be times when it’s just best not to Hero Power.

While it’s nice to get a buff on your weapon, if it’s turn 3 and you don’t have a pirate and you have Bloodsail Cultist as your only play you should just throw it on the board. You need to be constantly putting pressure on your opponent, and you can’t do that if you are just passing the turn trying to be overly patient. Upgrade! is another one of these cards, while it would be great to buff your Arcanite Reaper, you might never draw it. So, if there’s a chance to buff your War Axe to make a trade it’s usually best to do so.

Golakka Crawler is kind of an awkward addition, but it’s good against opposing Pirate decks. LOTS of decks are running Patches the Pirate and a small pirate package which means you can get a buffed Crawler quite often. However, if you have pirates on the board and you want to play Crawler you have no option other than to destroy one of them. There will be times when this isn’t that bad of a decision, especially with N'Zoth's First Mate, just don’t look at this as a common strategy and make sure to attack with the minion first.

Normally it’s best to not attack the face with weapons in the early game, but if you have a hand full of them you should be trying to get through them as much as possible.

This Pirate Warrior deck has no real comeback mechanics or card draw so you’ll really want to start throwing everything you have at your opponent in the midgame. If you don’t have your opponent close to dead at around turn 6 or 7 and you don’t have the board then the game is likely over.

Here’s just a list of cards you can add to this deck if you happen to be missing any of them and have already made replacements.