Our Ramp Paladin deck list guide goes through the ins-and-outs of this new Paladin build from Darkmoon Races that has taken the meta by storm! This guide will teach you how to mulligan, pilot, and substitute cards for this archetype! 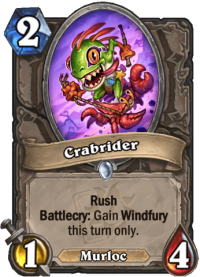 There had been plenty of attempts to make Paladin decks with big minions work, but none of them had found much success until the Darkmoon Races mini-set. It’s ironic, really, as the mini-set itself gave the deck some of its smallest minions, first and foremost the phenomenal Crabrider. I’m not even kidding. Crabrider with its Rush and Windfury is an excellent tool for swing turns, and that’s how it all came together and Ramp Paladin was born.

Ramp Paladin essentially consists of three parts: there are some big minions and ways to resurrect them, there are some Murlocs and Tip the Scales to summon them from the deck to both fight for the board early in the game and to thin your deck for better draws afterward, and there are Nozdormu the Timeless and High Abbess Alura to ramp up your mana and cheat out Tip the Scales early.

The deck can both push new threats for days and overpower opponents early with High Abbess Alura casting Tip the Scales. Therefore, it is capable of both contesting aggro decks and overpowering control decks.

In the early days of Darkmoon Races, Ramp Paladin has been the best deck in the game. This does not mean that it is invincible. Combo decks are the most difficult opponents for Ramp Paladin because they often get to ten mana against the deck and can pull off their combo. Aggro decks also have a chance, albeit a smaller one, to beat down Ramp Paladin before they stabilize, and I managed to lose to a control deck as Ramp Paladin too, once. Just too many Soul Mirrors in that game. Nonetheless, Ramp Paladin is a real deck, and a strong one.

Check out alternative versions of this deck on our Ramp Paladin archetype page!

There are several ways to win the game with Ramp Paladin, and while the deck has some high-roll aspects to it, knowing when to use your tools can lead to improved success. 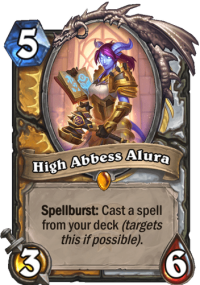 The easiest way to win the game is with High Abbess Alura, especially when you’re on the Coin. The only spell in the deck is Tip the Scales, so Alura’s Spellburst will always cast that and summon a boardful of Murlocs for you. At four or five mana, this is enough to beat almost every deck in the game, especially as Crabrider and Fishy Flyer provide some Rush power for you. If you’re not on the Coin, you need to find Wandmaker to give you a spell that you can use to activate Alura’s Spellburst.

Things get more complicated in the games where you do not have Alura.

Your ramp tool is Nozdormu the Timeless, and you have a fairly good chance to get it early either directly or from Redscale Dragontamer. Depending on the exact list that you use, Nozdormu is either the only dragon in the deck, or there may be some Circus Amalgams there as well, so Redscale Dragontamer is either a somewhat reliable or a guaranteed tutor for Nozdormu. 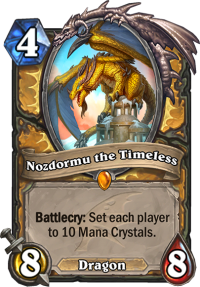 However, you need to be careful with Nozdormu the Timeless: it gives both players ten mana crystals, but the crystals start empty, so it is your opponent who gets the first ten-mana turn. It is not always correct to play Nozdormu even when you have it in your hand!

The flexibility of the deck really shows in the scenarios where things are not working out for you. Sometimes you find neither High Abbess Alura nor Nozdormu the Timeless. Is it time to concede? No! You have a lot of Murlocs in the deck, and they can be enough to win the game on their own.

Even when your Murlocs are unable to win the game, they may be able to stall the game long enough for you to get some of your big guns on the board. 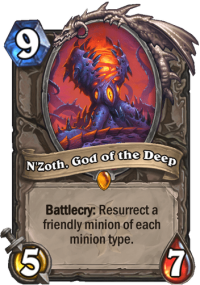 If the game turns into a war of attrition, you have a lot of minions available. At this point, the Old Gods become significant:

Note that Animated Broomstick can give any of your big minions Rush to help you fight for the board. You need room on the board for it, so you cannot combine it with Carnival Clown unless you have a minion on the board that you can trade off after summoning the Clowns. With Tip the Scales, you will get a Rush Murloc that you can trade off before playing Animated Broomstick to give your other Murlocs Rush.

One more note about Murlocs and Tip the Scales. Think carefully about what you want to do with Murgur Murgurgle. Much of the time, it is correct to play Murgur for tempo, but sometimes you may want to hold it back until you have played Tip the Scales so that do not accidentally pull the Prime and can get the Battlecry effect of Murgurgle Prime later in the game.

In aggro matchups, you are under a lot of pressure early on until you can get some big swing turns and crush the face-hitters. Use your Armor Vendor, Underlight Angling Rod, and any Murlocs you happen to get to fight for the board early on and try to survive until you can get your big minions on the board.

Tip the Scales from High Abbess Alura‘s Spellburst effect usually ends the game immediately, or if you can survive until Carnival Clowns, you’re also good.

Against control decks, you are the beatdown. Play one threat after another until they crumble.

Against combo decks, it is much of the same, but you’re on a timer, and giving your opponent ten mana can be fatal to you. Try to get steady pressure on the combo deck and hopefully you can get there before they find their combo.

Unfortunately, Ramp Paladin is an expensive deck that is based on synergies between Epic and Legendary cards, so most of the deck cannot effectively be replaced.