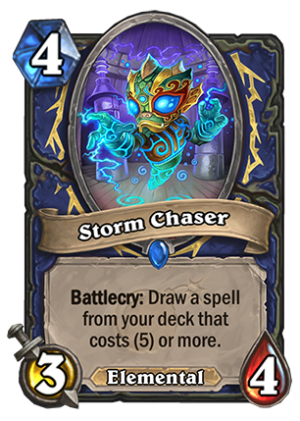 Battlecry: Draw a spell from your deck that costs (5) or more.

The “vanilla” card draw for 4 mana is 2/4 (Gnomish Inventor), so it’s already a bit better with one more attack. And that one more attack really matters, because lots of the early game cards right now have 3 health and not 2. On top of that, tutoring a specific card is usually better than just drawing. That’s the reason why Sandbinder is played in Shudderwock Shaman (to draw Grumble, Worldshaker) instead of Gnomish Inventor. Which means that this card has two advantages over a regular card draw.

However, for a tutor card to be good, you need to find a deck which actually WANTS to tutor the cards this thing draws. Right now, the main issue is the number of 5+ mana Shaman Spells in standard. There are exactly four (after Boomsday): Bloodlust, Volcano, Eureka! and Lesser Sapphire Spellstone. Luckily, each of those cards is something you want to tutor. Bloodlust in Midrange/Token decks, Volcano in Control decks, Eureka in Combo/Big decks (or whatever decks it will be played in) and Spellstone in Overload decks. We’re also waiting for the Shaman’s Legendary spell, which also has a significant chance to be 5+ mana (every other spell revealed so far is). The main issue I have with this one is the fact that if you run only two copies of 5+ mana spell, then it becomes a little inconsistent. Even with one copy of Storm Chaser, there is a chance to draw both before this guy, let alone two.

No doubt that the effect is powerful, and I believe that it will be played in the decks that really want to draw those 5+ mana spells. However, unless a certain decks puts 4+ of them (like Overload Shaman does already, actually), one copy of this will most likely be enough, just like Shudderwock Shaman runs only a single Sandbinder. Still, if you find the right deck, this card can be really, really good.