United in Stormwind has changed the Hearthstone meta in a major way. Questlines, fast combo decks, and powerful new aggro decks dominate the landscape with a sprinkle of midrange decks thrown in for good measure. Control decks, however, are largely absent.

Why is it so? What would it take for control to succeed? In this article, I take a look at the current state of control decks and the reasons behind their demise.

Control Decks in United in Stormwind

There are still some control decks in United in Stormwind. Players still want to use the archetype, even if it is not doing too well. Looking at the current control decks may be instructive in our journey to find out why.

Right now, only two classes even try to play control: Priest and Warrior.

Priest is the more popular control option and there are multiple styles of Control Priest decks around. Sadly (assuming you like this playstyle), none of them are very good.

Hey, #5 Legend does not sound bad at all! However, there are high-Legend decks and then there are high-Legend decks. Some decks make it to the top because they are generally strong decks that are difficult to counter. However, some decks make it to the top spots because the top players play against each other on a regular basis, and there are more opportunities to target specific decks in top-100 than there are even a few hundred ranks lower.

Obviously, Habugabu’s list attracted interest and it has now been played more than a thousand times. The overall win rate? Around 45%. The deck has its upsides, especially against Hunters and Rogues, but when it meets a varied meta, it has far too many weaknesses to succeed. 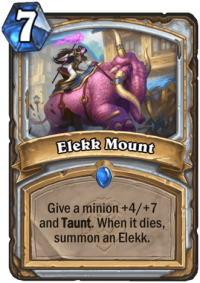 I picked this list from HSReplay as it was the best-performing variant of the archetype that had a good sample size. The idea is to run only Elekk Mount in addition to the Questline as spells so that you can tutor for that or the Questline reward with High Abbess Alura. The rest of the spells can simply be discovered.

I played a slightly different version on stream a few days ago, and it worked quite well. The deck is surprisingly adept at defending, and Elekk Mount is often just game-winning against decks that try to pressure you on the board. The fastest aggro decks and combo decks are a major problem though. Oh, I also never managed to complete my Questline because no game would last long enough.

Looking at a larger sample of games with the deck, we are now inching closer to 50% but we are not quite there yet.

The best-performing Control Priest deck on the ladder is the one we featured last week from Masters Tour Silvermoon:

50%, baby, 50%! This superstar of a control deck for the current meta can actually win half of its games! Elekk Mount is the strongest card in the deck, followed by Far Watch Post, Mindrender Illucia, Mutanus the Devourer, and Xyrella.

What do these best cards do? Elekk Mount and Xyrella help you to stop aggro. Far Watch Post is universally useful in the current meta as it slows down the game, and Mindrender Illucia and Mutanus the Devourer can sometimes stop combo decks. To an extent, Elekk Mount can even apply some pressure on the opponent for a proactive strategy.

In one of his Twitter Q&A’s, Iksar wrote that control decks should “close out a game with threats before the combo deck closes out their own strategy.” The ultimate control decks to try this are Big decks, of which Big Warrior is the only current representative in Standard.

Looking at all matchups, Big Warrior has an overall win rate of 45% and is largely unplayable.

That’s all control archetypes that we have good samples of data for.

However, I also played some old-school Control Warrior recently, another deck that we featured earlier in our Hearthstone esports coverage, Tincho’s Control Warrior from Masters Tour Silvermoon:

This is a deck with a mixture of removal, combo disruption in the form of Shadow Hunter Vol'jin and Mutanus the Devourer, and proactive threats in the form of Troublemaker and Rattlegore.

There is not enough data to reliably evaluate the deck, but it seems that Quest Mage, Quest Warlock, and Quest Shaman remain major issues for this style as well.

What Is Wrong With Control Decks in United in Stormwind?

In the Twitter Q&A’s, Iksar has stated that they want to see proactive control decks, to the extent that they can outpace combo decks. This is a logical fallacy. If control decks were actually fast enough to generate threats to beat combo decks before the combos are ready, they would be the only archetype in the game. Control decks are naturally good at defending. If you are good at defending and can also outpace decks with an inevitability, you are superior to everything. 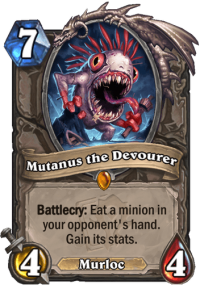 It is not realistic for a control deck to be faster than a combo deck. In the current meta, Big Warrior is not the best anti-combo control deck. All control decks with two combo-disruption pieces, even though they are not fully reliable, are stronger against combo than a threat-based approach. Mindrender Illucia, Shadow Hunter Vol'jin, and Mutanus the Devourer are the right tools to use against combo decks from the current card pool. If combo decks were slower, it would only improve the odds of the control player to find disruptive tools rather than build an army powerful enough to smash them before they can put their combo together, making the disruption tools even better in comparison.

So, there are some major problems for control decks to defend against combo.

Furthermore, things do not look exactly bright against aggro either. Many current control decks struggle against the likes of Face Hunter and Aggro Shadow Priest. You need to pack the deck full of removal and healing in order to survive the onslaught current aggressive decks are capable of. However, if you do that, there is not enough room to put threats in the deck to race combo decks. You can build a control deck that survives aggro, at least most of the time, but your threat potential will be severely limited. Tincho’s Control Warrior that spends three cards on threats, two copies of Troublemaker and a Rattlegore, seems to be well-built in this regard. 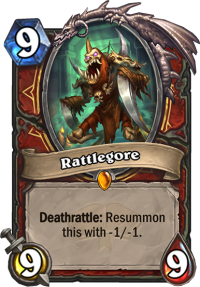 Finally, control decks need to contest midrange decks, like Elemental Shaman, Deathrattle Demon Hunter, and Handbuff Paladin. These are the natural predators of control decks, and typically playing threat after threat will eventually cause a control deck to crumble. Playing too many threats at once or going too slow are both paths to defeat when playing a midrange deck against a control deck. The matchup is naturally favored for the midrange player, but incorrect pacing or just a poor draw can open up a path for the control player to win, as long as they are able to time their removal correctly.

The main problem with the current meta from a control perspective is that control decks have insufficient tools to handle the matchups that they are meant to be highly competitive in. Control decks simply aren’t good against combo, and that’s fine. But currently, combos can be completed too quickly so even control decks built specifically to counter them don’t stand much chance. What’s even more important, there is just too much damage coming in too fast from aggro, which is supposed to be a good matchup. The midrange vs control matchup is the only one that has remained roughly the same, and that is not good news for the control player. If you could still consistently counter aggro while having at least a reasonable chance against combo, we would probably see more control builds on the ladder.

Hearthstone as a game has a large built-in advantage for the attacker. The attacker chooses targets. There is no interaction during the opponent’s turn. Mana is automatically generated and requires nothing from the deck. All of these design decisions that have been made to make the game flow smoothly also make it vulnerable to snowballing advantages. If an aggressive deck or combo deck is strong enough, a player can just execute their deck’s strategy while paying little attention to the opponent and win the game. This is happening in the game right now, and control decks paying the price is just one symptom of the larger issue.

What can even be done about this? Should something be done about this? The designers seem reasonably happy with a fast-paced game where snowballing advantages happen on a regular basis. Apparently, their metrics show that the player base largely enjoys this meta. Even if they wanted, turning back time is not simple: If you buff defensive tools too much, combo decks will also use them and trample over everything with their inevitability. If you weaken aggro too much, it is again the combo decks that will benefit. And if you start to think about what makes most combo decks strong, you come to the uncomfortable realization that it is Questlines that have ultimately shaped this meta, and Questlines are the core feature of the entire expansion! The current meta is the result of the main feature Blizzard built into the game with United in Stormwind, and how do you even go about changing that? It’s good that many players like it the way it is because changing this interconnected web would not be a simple task. Therefore, I am not optimistic about the chances of control decks in the near future.