Many people were concerned as soon as Archivist Elysiana was revealed. It is an immensely powerful tool for control decks, no doubt, but its powers have affected the game in unprecedented ways: It is now perfectly normal for a control mirror to end in a 45-turn draw, and tournament schedules have been hurt by hour-long control matches. Some single-day qualifier tournaments have lasted more than 15 hours from start to finish thanks to control matchups taking ages!

Whether you are playing on the ladder or in a tournament, queueing a control deck risks running into a mirror matchup and spending a long time in a single game. Even when the game does not end in a draw, it goes on for a long time and the cards provided to each player by Archivist Elysiana play a key role in deciding the winner.

The Role of Control Decks in Hearthstone

Hearthstone is naturally a tempo-oriented game. Several design decisions promote aggressive strategies, such as attacker’s advantage (attacker chooses the targets, whereas in many other games defender chooses blockers), guaranteed mana each turn, and a very powerful mulligan where you can keep individual cards and no value is lost regardless of how many cards you want to change. 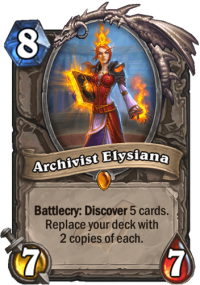 All of this means that Hearthstone is a faster-paced game than other similar card games, and the top decks in the game are almost always aggressive decks, even when they are not pure aggro decks. You can also view recent design decisions in this light: the move away from Charge and towards Rush, for example, limits the power of aggressive decks and provides balance to the inherent advantage aggressive decks have based on the rules of the game.

However, a game with only aggro decks would quickly become boring. Variety is needed, and it has traditionally been provided by control decks that try to defend themselves against aggro. Providing sufficient tools for control decks to do so makes them viable despite the inherent disadvantage, and this in turn opens up space for midrange decks that are good against control but would struggle in a pure aggro meta.

The fourth deck type, combo decks, has been far more problematic for Hearthstone to balance, because the lack of interaction during the opponent’s turn means that combo decks are typically either too strong or far too weak. For the most part, they have just been weak in Hearthstone, and the brief periods of combo strength have been a little lacking in fun and interaction. However, that is an altogether different subject. This time, we’re interested in control, as without it, we cannot even have the triangle of aggro – midrange – control, and the game would have a severe lack of variety.

To recap, it is important that there are control decks in Hearthstone, even when they are not meant to be the dominant archetype in the game. When control decks exist, at times control mirrors will also inevitably happen. It is this small but important part of the game that Elysiana has broken.

How Do You Win a Control Mirror?

Control mirrors are a form of art on their own. Whereas control decks win against aggro decks simply by defending, they also need some plan for when an unmovable object meets another unmovable object. Even if the word draw is the first thing that comes to mind, control mirrors have typically not ended in a draw in the history of Hearthstone.

A control mirror is a test of resource management. You need to churn out more value from your cards over time than your opponent, and look for opportunities to answer two of their cards with one of your own. Both players are equipped with more answers than threats, but there are always openings to take advantage of. Ultimately, the game has a final safeguard: fatigue.

In many other card games, you lose the game if you run out of cards. Hearthstone uses smaller decks, only 30 cards as compared to 60 or 45 used by some of its competitors, and it has a different rule for when your deck runs out. Instead of losing on the spot, you start to take fatigue damage that increases each time you try to draw a card from your empty deck. Even a small difference when entering fatigue can turn into a major advantage! 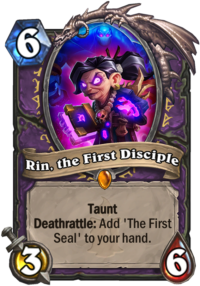 Control Warlock of old, for example, was happy to burn just a couple of cards with Rin, the First Disciple, enter fatigue a little later than the opponent, and watch as the opponent would run out of health much faster than the Warlock. Interestingly enough, the time it took the Warlock to set up to burn the opponent’s deck meant that the opponent had a window of opportunity to gain tempo and pressure the Warlock. Checks and balances.

Archivist Elysiana breaks this system. You start the game with 30 cards. Archivist Elysiana adds another 10 cards to your deck, and if you bounce it with Youthful Brewmaster or Baleful Banker, you get another 10 (or 11) cards. With but a single bounce, you are playing with a 50-card deck that can easily take you all the way to the turn limit of 45 turns – with an investment of two cards in your deck! Why would any control deck opt to do anything else? What other win condition could be stronger for mere two card slots than no fatigue and 20 additional cards that can provide plenty of new threats after you have drawn all of your original cards? 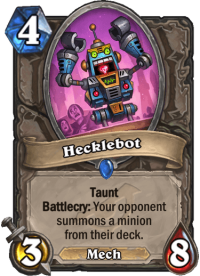 There are currently no effective counters to Archivist Elysiana in Standard format. We have no tools to disrupt minions in the opponent’s hand, and exactly one card to disrupt them while they are in the deck, Hecklebot. Countering Archivist Elysiana with Hecklebot is the same as countering combo decks with Gnomeferatu used to be. Sure, you have a few percent chance to hit the right card and instantly win. The rest of the time, you accomplish nothing.

Silence effects are not common in the current meta, so some Control Warrior builds have been invented to take advantage of this: Instead of Archivist Elysiana, they run Mecha'thun. No, not the full OTK combo package, which takes up a lot of space from your deck. Just Mecha'thun. The idea is that while your control opponent may have infinite cards, you just hit fatigue, play all your cards, and then play the Mecha'thun. Either that 10 damage per turn eventually kills the opponent or they play something on the board that Mecha'thun can trade into and die.

While this invention may work in the current meta, it is but a single silence effect away from becoming useless – and it is already useless against Control Shaman with Hex.

Obviously, you can simply play a midrange deck or even a combo deck. Archivist Elysiana does not win against all archetypes. To be exact, it does not always win against control decks either, in fact it makes draws much more likely.

Why Do We Need Archivist Elysiana, Anyway? 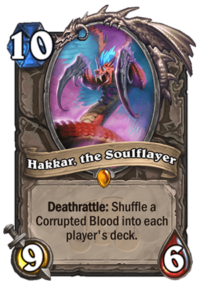 Would the game simply be better if Archivist Elysiana was removed from the game? While it has an unfortunate effect on control mirrors, Archivist Elysiana also has a legitimate purpose in the game: it can help control decks counter cards that are shuffled into their decks, such as Bombs from Wrenchcalibur and other such cards and Corrupted Bloods from Hakkar, the Soulflayer.

Without Archivist Elysiana‘s effect, we could end up with Bomb Warriors and Hakkar Paladins with Hakkar, the Soulflayer and Prince Liam (to remove bloods from their own deck) dominating the control game. At the very least, Elysiana is an insurance card to prevent Bomb Warrior from becoming too dominant. Sadly, this insurance has come at a high cost in the form of hour-long control mirrors that end in a draw.

How Can Archivist Elysiana Be Fixed?

There are several ways that Archivist Elysiana could be changed, but it is not an easy fix.

The traditional way for Blizzard to nerf cards is to increase their mana cost. This would prevent an immediate bounce with Youthful Brewmaster or Baleful Banker, but it would do more harm than good. Control Shaman would become the ultimate control deck, because it can store the Archivist Elysiana Battlecry effect in Shudderwock, and therefore always has access to two instances of the Battlecry, even without a bounce effect. All other control decks would fatigue before the might of Control Shaman.

Another time-honored way to nerf cards is to make them give +1 Attack, let’s say to all of your Battlecry minions. Alas, this fix is also questionable, as then there is no counter to Bombs. 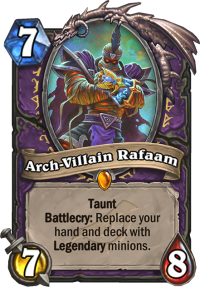 Yet another potential fix would be to remove Elysiana’s ability to extend the game. For example, if Elysiana were to replace existing cards in your deck with something else, it could remove Bombs and Corrupted Bloods without significantly affecting fatigue. This is actually exactly what Arch-Villain Rafaam already does in Warlock. However, this is not a perfect fix. It can deal with Corrupted Blood effectively, but it cannot do a whole lot against a Control Bomb Warrior.

Bomb Warrior can already shuffle four bombs into a deck instantly, and this is a strategy already used against careless Archivist Elysiana users: when the opponent is in fatigue, you play Augmented Elekk + Clockwork Goblin + Clockwork Goblin or Wrenchcalibur, and boom, that’s four bombs in the deck that explode instantly to deal 20 damage when the opponent is in fatigue. While this fix has more potential than a simple mana-cost adjustment, it would leave Bomb Warrior with a major advantage against other control decks when they tune the deck correctly and adopt a strategy to only start shuffling in Bombs in fatigue against control decks.

Archivist Elysiana could also be changed to protect your deck. What if it had a Battlecry effect that prevents cards from being shuffled into your deck? Any existing Bombs or Corrupted Bloods would be drawn and deal damage as usual, but no new ones could enter. The Corrupted Blood cycle would be broken. The in-fatigue Bomb combo would not work. As a downside, you could not shuffle more cards into your deck either – not a big deal for Standard right now with Direhorn Hatchling freshly rotated out of the format, but a potentially important feature. It would even be a buff for Hakkar, the Soulflayer decks that would not shuffle Corrupted Bloods into their own deck anymore. I believe such a change would make Elysiana a more interesting and interactive card and benefit the game as a whole.

The simple fix of increasing the mana cost of Archivist Elysiana would accomplish but little, and is not a preferable solution. The solution I currently consider the best would be for Archivist Elysiana to protect the deck from additional shuffled cards: it would allow the card to fulfill its tech card role without unnecessarily extending game length.