Changing cards’ costs can be an interesting and unique gameplay mechanic but any semblance of balance falls apart once you hit zero. Remember that 1 is an infinitely bigger number than 0 and it shows very well in Hearthstone. After all, one of the biggest limiters in the game is mana – until you get down to 0, when it stops becoming a concern and you can play as many of those cards as you want. Going from Mechwarper to Incanter's Flow, there’s a good argument to be made that Hearthstone would be a much healthier game if all cost reduction effects had the good old “but not less than (1)”.

Hearthstone Is a Numbers Game 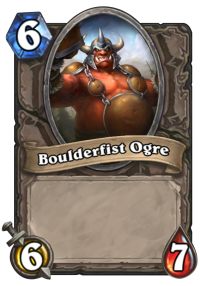 We’re all familiar with the Vanilla Test, a metric no longer very applicable for the general gameplay experience of Hearthstone but that is still nevertheless the cornerstone of mathing out the value of a body on a minion. For a mana cost of X, expect 2X+1 stats as the baseline, and supposedly every keyword and ability ought to subtract from this. It is why Boulderfist Ogre has such good stats for the cost.

This basic math flows below the design of games like Hearthstone. Just consider the most common nerfs in the game: even though changes of just one stat may seem small on the surface, they tend to be quite large percentage-wise, especially when it comes to cheap minions and spells. Changing a 3/2 to a 2/2 is a 20% downgrade in stats. Recognizing this should make it immediately clear why anything hitting zero can potentially be such a massive gameplay issue, and indeed it has been over the course of the game’s lifetime.

The original dev team seemed to understand this fact, as evidenced by the aggressive capping present on Summoning Portal, a Warlock card that therefore never saw any competitive play but would have no doubt been broken about it: a 4 mana 0/4 whose text reads “Your minions cost (2) less, but no less than (1)”. We can only imagine how many times Summoning Portal would break the game already if not for that restriction.

Of course, the early days of Hearthstone also had its fair share of whiffs and it’s safe to say that many of the card design aspects have been greatly refined in the intervening years. Gone are the absolutely inexcusable problem cards like Nat Pagle or Undertaker, and for a while, you could have been excused for thinking that nothing like Mechwarper would be printed again either in light of the damage it could cause to the gameplay experience (which actually did happen, much later and in the Wild format – remember SN1P-SN4P Warlock?) 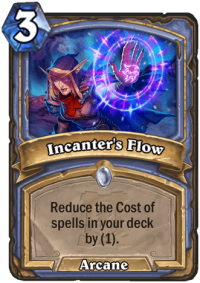 A quick run through Hearthstone’s history with cards that pushed other ones’ costs down all the way to zero showcase some of the most degenerate decks around. Sorcerer's Apprentice from Classic was a key part of Quest Mage’s OTK setup, similarly to Radiant Elemental in certain Priest builds related to Divine Spirit/Inner Fire or the Test Subject OTK, Mechwarper’s early board flood, Emperor Thaurissan’s enabling of OTK finishers, Dreampetal Florist, the endless amount of Librams…

The tempo considerations of potentially 0-cost cards can also lead to back-breaking board state flips, as evidenced by nerfs to Corridor Creeper and Frenzied Felwing. It’s also of little surprise that the Giants capable of being paid for free also had an outsized impact, most notably Arcane Giant, though Molten Giant and Sea Giant were potentially instant game-winners as well in the earlier days of Hearthstone and Flesh Giant has been a serious concern in certain builds.

Regardless of whether you find these decks and these gameplay options fun, the fact is that Hearthstone’s design allows for basically no counterplay against them: since you can’t interact with your opponent’s turn, the only winning move is often not to play. The outsized instant impact and the ability to pull off naturally impossible plays with these setups make for experiences that are only fun for one player at most. 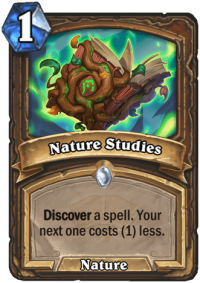 There’s also the sneaky emergence of mana banking options in Hearthstone over the last couple of years that make outlandishly brutal combo plays possible. Cards like the Studies spells from Scholomance Academy (most notably Druid’s variation on the theme – Nature Studies), Conjure Mana Biscuit and others allow slower and more combo-oriented decks to save up resources they’d otherwise have to float, especially in the early game, allowing for even more powerful payoff turns later down the line.

Though this may seem like a desirable interaction, it has an outsized impact on the gameplay and needs to be carefully kept in check. Unlike a game like MTG, where the available amount of mana in the early game serves as one of the elements of variance by means of mana flood and mana screw (ie. the amount of lands you draw in your opening hand), Hearthstone’s flat and consistent growth of resources makes tools like this potentially ridiculous and near-impossible to counter, at least without the sort of unrelenting aggression Brian Kibler has highlighted in his recent video on the current meta: give too many tools to combo decks and the only reliable response is ultra-aggressive beatdown, pushing control decks out of the meta.

The archetype least capable of making use of zero-mana cards, by the way? You guessed it: control, the red-headed stepchild of Hearthstone. Control decks care much more about value than tempo,