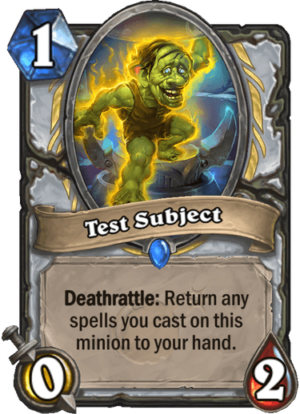 Test Subject is a 1 Mana Cost Rare Priest Minion card from the The Boomsday Project set!

Deathrattle: Return any spells you cast on this minion to your hand.

It looks like Silence will be more and more desirable this expansion, with effects like that. Test Subject is pretty bad at the beginning, but he can get out of control really quickly. Despite being a 1-drop, you can’t really look at him as one. Most of the time, you want to throw him on the board with some small buff first – e.g. Power Word: Shield. Now if your opponent answers it, you still get another shield to cycle, so it’s not that bad. If he Silences it, that’s also not bad in the kind of deck you’re playing. But if he sticks onto the board, you can start throwing extra buffs – Divine Spirit, Inner Fire and such. You probably won’t kill your opponent right away, but you should put a massive target on the board and if it gets killed, repeat.

So that’s the kind of deck it might fit into. Other than that, maybe Quest Priest, but I don’t think it runs enough buffs to justify this guy.

The card is pretty powerful in vacuum, but the problem is that the meta MIGHT be full of Silence cards, rendering it rather weak. It’s the Primalfin Champion problem – when it works, it’s really good, but then it gets Silenced/Transformed and suddenly it’s bad for you.

Interesting option in Inner Fire Priest, probably not much anywhere else.