If you thought that nothing can surprise you more than the recent buff patch, you might have been mistaken. After a nerf patch and a buff patch, we’ll gett a… Hall of Fame rotation. What makes it surprising is that those usually happen alongside the Standard rotation, with the first expansion of each year (so we just had one not even 3 months ago). It’s the first time we’re getting one mid-year. The HoF rotation and addition of new cards will happen with the next major patch (no precise date yet). 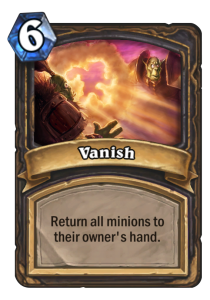 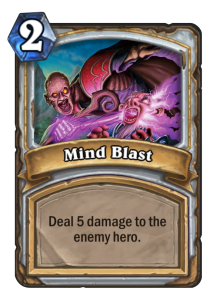 Two cards are going to rotate out to Wild – Rogue’s Vanish and Priest’s Mind Blast. The reason is simple (and outlined in the official post below) – those two cards just don’t fit into what Blizzard thinks should be the identity of those classes. Rogue should be good at clearing single targets, but not good at dealing with wide boards. And Priest is not meant to be a burst class that can deal a lot of burn damage from hand – they want the class to win either through outvaluing the opponent (Control builds) or through board (Clone/Resurrect/Deathrattle etc. builds). We’ll be getting two new Basic cards to replace Vanish and Mind Blast – cards that should be more in line with what Blizzard wants those classes to do.

But that’s not all. We’ll also get the already promised cards that replace the latest HoF rotation (Naturalize, Divine Favor, Doomguard). On top of that, all of the previously rotated Neutral cards will also get replaced. Blizzard used to only replace Class cards that rotated out (since a Neutral card out didn’t disturb the class balance), but they’ve apparently changed their minds. Which means that we’ll get three replacements for the last HoF rotation, two for this, as well as five more for the Neutrals that have previously rotated out (including two Legendaries – Sylvanas Windrunner and Ragnaros the Firelord). It’s worth noting that cards from Witchwood will NOT be replaced, since they are not a part of an evergreen set. 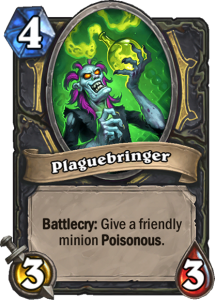 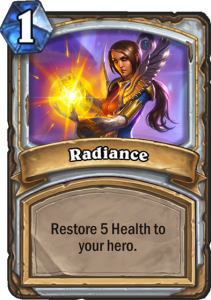 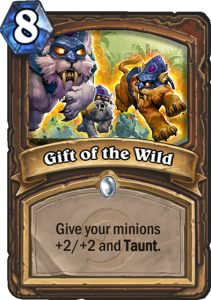 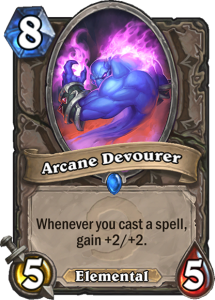 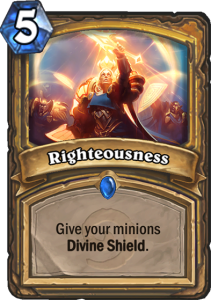 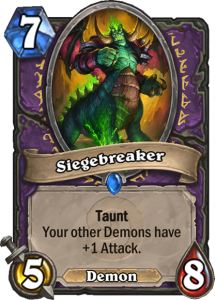 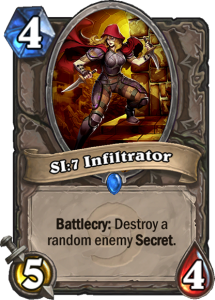 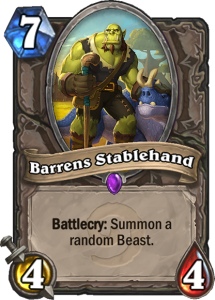 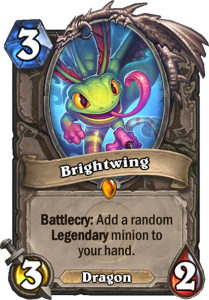 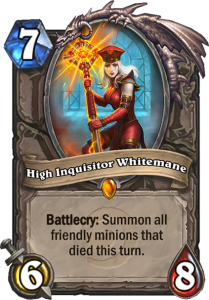 If you want to read more about the reasons why the cards rotate out and identity of each class, be sure to check out the official blog post below.

As Hearthstone expands and more patrons make their way to the tavern, it becomes increasingly important for us to revisit past designs to make sure we are building on the right foundation. Over the past 5 years of evolution and growth, we’ve learned a lot about what makes each of the classes in Hearthstone different and what unique experiences players should have when playing each of these classes. Headed into our next update, we’d like to take this opportunity to outline our current class identity philosophy and to share our thoughts on where we see each class in the future.

When defining a class’s identity, we’re primarily concerned with staying true to the following three guidelines: adhere to a class’s “fantasy”, define the things the class should excel at, and establish where the class should struggle.

When looking at the fantasy of each class we want to capture the emotion of the class through gameplay. That could mean charging headfirst into battle as a Warrior, wielding devastating magical spells as a Mage, or plotting the perfect combination of moves as a Rogue. Once we know what makes a class tick, we can make better decisions about what cards fit and empower that fantasy.

Establishing stronger class identities serves several purposes.  Giving classes better defined characteristics allows us to have more freedom when creating new mechanics. We can push further into the extremes knowing that each class has downsides to balance out new power. It also enables more counter-play when there is a clearer understanding of a class’s strengths and weaknesses. For example, the knowledge that a Druid is weak against big minions lets you start planning your strategy from the start of the match, with little to no knowledge of your opponent’s specific deck.

Here’s a brief look into how we currently picture each of the classes:

Druid: Attuned with nature, Druids rely on the magic of the wild, massive beasts, and swarms of woodland creatures. Their toolbox allows them the versatility to pivot from defense to aggression. However, they have limited ways to directly clear out enemy minions.

Hunter: Hunters use their wit, ferocity, and an army of beasts fighting alongside them to destroy their competition. Although they lack in defense, their aggression allows them to push through before they need it. A well-timed Secret or Deathrattle can help them gain clutch advantages against their opponent.

Mage: Mages have mastered the arcane arts and use their wide range of spells to take on even the most aggressive of opponents. Their defensive cadre is limited—while a good Mage usually has a useful tool to deal with any situation, a great Mage conjures the right tool when they need it.

Paladin: Paladins are great champions who support their minions with buffs, healing, and divine shields; however, they are not afraid to get their hands dirty when the time comes. They are methodical, controlling the battlefield through debuffs and focused attacks instead of destructive spells. Strength and persistence are the keys to a Paladin’s victory.

Priest: Priests balance holy light and shadow magic to defeat their opponents. They control a battle’s outcome using powerful spells with situational applications. While not the most aggressive, they are able to generate, copy, and use combinations of cards to create a powerful army.

Rogue: Rogues hide in the shadows, planning for the perfect time to strike. They may be sneaky and nimble, but they lack strong defenses and regeneration, forcing them to act quickly to incapacitate an opponent. Their innate ability to generate, draw, and burgle cards allows them to build up and execute on many synergies.

Shaman: Shamans wield the power of the elements along with their trusty totems. While they may not be able to generate resources as quickly as a Mage, they are able to overload their Mana Crystals with lightning, allowing them to ramp up for a burst of power faster than other classes. Shamans are thus rewarded for planning a few turns ahead by tuning their mana curve. Shamans also have strong tools to adapt to many situations. Although they are not as versatile as a Druid’s Choose One cards, they are able to extend their capabilities in ways other classes might not be able to.

Warlock: Sometimes sacrifices need to be made for power, and when you get demons involved this is often the case. The Warlock is comfortable with this bond and can manage all their resources (including their Health) in order to defeat their opponent. Their inherent ability to draw cards—with a sacrifice—allows them to keep the power flowing.

Warrior: Warriors thirst for the battlefield. Primarily a martial class, they incorporate Armor, weapons, and minions to destroy their opponents. The minions who fight alongside each Warrior tend to be bigger and stronger, and they employ Rush and Taunt to control the flow of battle.

Neutral: Neutral cards allow classes to extend their strengths to reach a specific goal with their deck or to make up for some of their weaknesses. For example, a Paladin can add Neutral Murlocs to help them round out their deck, or a Hunter may use a Neutral card that gives them a small amount of healing so they can stay in the fight longer. These cards are generally lower in power level so a class can never completely overcome their weaknesses.

As we’ve worked to define what each class should bring to the table, we’ve found several cards that don’t match our established class identities. We’ll continue to adjust the Basic and Classic sets as needed, but for this update we’ve decided to address the following two cards: Mind Blast and Vanish.

While we like Rogues’ knack for getting out of sticky situations with targeted removal, Vanish allows them to effectively clear an entire board. This negates one of their intended weaknesses, reduces our ability to design towards their strengths, and makes it much harder for players to strategize against a Rogue.

Mind Blast gives Priests the ability to inflict a large amount of direct Face damage. We want to limit the amount of damage that Priests are able to deal from their hand, which will allow us to make cards that better emphasize their strengths in controlling the game.

We’ll be replacing these two cards with effects that better speak to their classes’ core fantasies.

For Priests, we’ve added Radiance since we wanted to have a low-cost spell that could be used for tricky spell synergies that also provided a powerful baseline heal for the class.  Plaguebringer provides Rogues with another way to destroy minions and further establishes this class as the masters of Poison.

Since these are Basic and Classic cards (and so not subject to set rotation), we want to be careful with their power level so that Hearthstone can continue to feel fresh with each new year. At the same time, we’d like to provide effects that are natural for their class and can be useful in the right circumstances.

Over the past several years, we’ve taken steps toward further defining class identities and maintaining a healthy meta-game by moving some over-represented or design-limiting Classic cards into the Hall of Fame, and by adding new cards to this set whenever appropriate. For instance, in 2017 we moved both Ragnaros, the Firelord and Sylvanas Windrunner to the Hall of Fame, and we’ve more recently done the same for Divine Favor, Ice Block, and several other cards. Leading up to the release of Rastakhan’s Rumble in 2018, we also introduced some new cards to the Classic set, such as Pilfer, Icicle, and Tome of Intellect.

We’re always assessing the prominence and impact of cards from every set, including Basic and Classic, and will continue to make changes when we believe it makes for a healthier meta-game and a better experience for players. This may come in the form of additions to the Hall of Fame or with the introduction of new cards that we feel bring some fresh new options to players, while still being healthy for the game.

When moving Classic cards to the Hall of Fame, we always look to introduce new cards to this set in order to keep a healthy amount of easily-obtainable cards available to players in Standard format games. We’ve been working for quite a while on some new additions to the Classic set, and we feel that now is the perfect time to bring them into the game.

Here’s a look at the new cards that will be available in Classic card packs (and craftable with Arcane Dust) starting with the next major update.

Your feedback is always welcome and appreciated, so we are very excited to share these changes with you before they’re in the game.

Let us know what you think in the comments section or on the Hearthstone forums. Thanks for playing!