The Murder at Castle Nathria expansion brings a brand new card type to Hearthstone: locations! In this guide, I will explain how locations work and examine each of the ten locations introduced in the expansion. I will also look at the new cards that interact with locations. 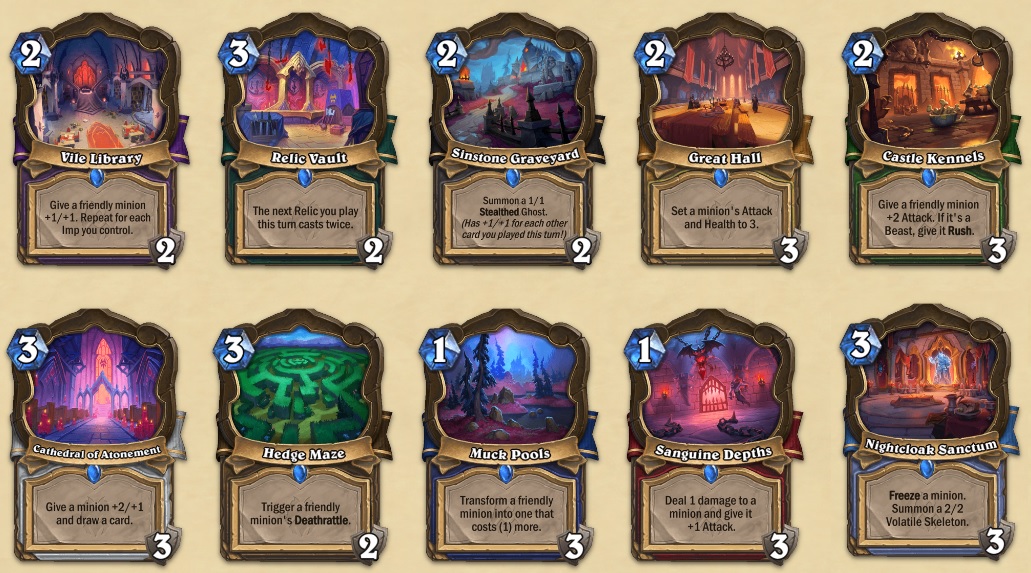 Locations in a Nutshell

When you play a location, it takes up a spot on the board, just like a minion.

Picture: A full board with two locations.

To be more specific, locations act in the same way as Dormant minions: you cannot target a location with spells or attacks, and cleave attacks cannot pass through a location. For example, an Infused Stonebound Gargon cannot hit a minion on the other side of a location.

Tip: Position your locations between your minions to play around effects that deal damage to adjacent minions.

Locations do not have Health, but they do have Durability. Each time you use a location’s effect, it loses one Durability.

Furthermore, each time you use a location’s effect, it goes into cooldown for one turn, so you can use each location only every other turn.

Tip: Plan the turns when you use your location. Sometimes you want to save its effect for future use to be able to respond to the opponent’s actions.

A location’s effect does not cost any mana and it can be used on the same turn when you play the location.

When a location’s Durability reaches zero, it is removed from the board.

As locations are neither minions nor spells, effects that can counter minions or spells do not work against locations. They also cannot be destroyed with board clears like Flamestrike or even Twisting Nether.

Cards That Interact With Locations

Locations cannot be attacked or targeted by spells, but there are two new cards that interact with locations. 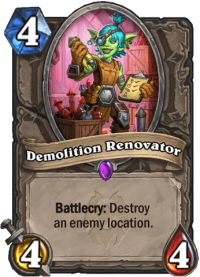 Demolition Renovator is the Location Ooze. It is currently the only card in the game that can destroy a location. However, with only one location in each class at the moment, and as locations can be used on the turn they are played, Demolition Renovator is a weak tech card. It is an emergency solution if locations get completely out of hand, but it is unlikely to see play.

Dispossessed Soul allows you to Discover a copy of a card in your deck if you control a location. However, as each class currently has access to only one location, you are usually not able to play them consistently enough to be able to use this card.

Locations are a permanent addition to the game, and there will be more locations in future expansions. As the location pool gets bigger, cards that work with locations may become more relevant.

The Locations Currently in the Game 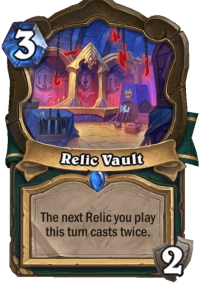 Druid: Hedge Maze provides the Druid with a way to trigger Deathrattles of big minions immediately when they are played. Hedge Maze is typically played on the board on an earlier turn and then it waits for the Deathrattle minion to arrive. So far, it looks like Druid will have other archetypes that are stronger than Deathrattles though.

Hunter: Castle Kennels has major synergies with the new Wildseed Dormant minions. As all Wildseeds are Beasts, Castle Kennels can give them an attack buff and Rush on the turn they wake up. The attack buff is permanent, so its targets become bigger threats for as long as they live. Castle Kennels is a powerful addition to many minion-based Hunter decks. 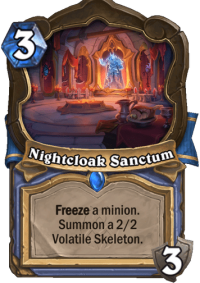 Mage: Nightcloak Sanctum is part of the Volatile Skeleton package in Mage. It is one of the strongest pieces in the package, as you can use it to freeze a dangerous minion multiple times, stalling the game. It may even be strong enough to see play outside the package in other Control Mage decks. It is important to keep in mind the one-turn cooldown after use because you have to be strategic about when to freeze enemies and summon skeletons, and when to wait for a bigger target.

Paladin: Great Hall can buff your own minions and also make opponent’s big minions much smaller. Sadly, it cannot target Rogue’s Stealth Ghosts and it also does not help against Charge minions. It is a situational location that can be powerful against individual big minions.

Priest: If there are minion-based Priest decks, like Aggro Shadow Priest, they will be interested in Cathedral of Atonement. Slower Priest decks generally want other forms of card draw as they may struggle to provide targets for the buff. 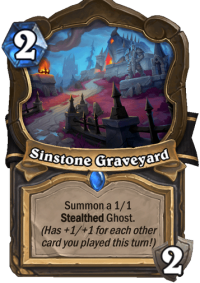 Rogue: Sinstone Graveyard and Necrolord Draka are the main threats in Miracle Rogue. It is possible to play Sinstone Graveyard on an earlier turn, but thanks to discounts from Serrated Bone Spike and Efficient Octo-bot as well as extra Coins from Loan Shark, Rogue can also just play all the cards on the same turn. Sinstone Graveyard can create Stealth minions with more than 10/10 stats on regular basis.

Shaman: While Muck Pools can only evolve one minion at a time and not the entire board, it is still a powerful asset in Evolve Shaman decks. It allows you to spend mana on the Evolve effect in advance and then use it immediately when you play a minion.

Warlock: Vile Library is the most powerful buff card in Imp Warlock. A simple Fiendish Circle turns into an additional +4/+4 buff from Vile Library. Resurrecting four Imps with Imp King Rafaam similarly enables Vile Library to give a much bigger buff. Any minion on the board and some free space for Imps can result in a surprising amount of reach for Imp Warlock.

Warrior: Sanguine Depths looks like the weakest location in the initial release. While there are minions that benefit from being damaged and combining Sanguine Depths with Grommash Hellscream is flashy and fun, the location is generally underwhelming. Using it to snipe one-health enemy minions is also possible, but hardly worth a card slot.

A Location by Any Other Name

Just like there are strong and weak minions, there are also strong and weak locations. There are only 10 locations in the game at the moment, one for each class, and not every deck wants to use a location. As more locations are released in future expansions, they may become more common in the game. At the moment, decks like Imp Warlock, Miracle Rogue, Skeleton Mage, Relic Demon Hunter, and various Beast Hunters are most interested in locations, as their locations are generally the strongest.