Here’s our The Crone Boss Guide & Information for the Hearthstone Adventure, One Night in Karazhan. We’ll be listing The Crone’s deck, special cards, winning deck lists, and card rewards for defeating the boss!

The Crone is the third boss of the Opera wing in One Night in Karazhan. You need to help protect Dorothee because if you don’t The Crone will launch her Hero Power the does 100 damage to your face. Dorothee gives the minions you put on her left side Charge and the right side Taunt. Use this ability to take down The Crone! 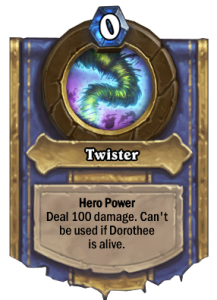 The secret to beating The Crone is that you have to win by turn-8! Why is that? Because she’s pretty much guaranteed to have Twisting Nether in her hand and once she plays it she wins the game with her Hero Power. So, you need to actively protect Dorothee while aggressively dealing damage to The Crone. One of the ways to accomplish this is to run a Divine Spirit/Inner Fire Priest deck.