Our Totem Shaman deck list guide will go through the ins-and-outs of the potentially viable deck from the Kobolds and Catacombs Expansion! This guide will teach you how to mulligan, pilot, and substitute cards for this archetype! For now the deck guide is theorycraft, but as soon as the expansion goes live we will start updating it right away!

Kobolds and Catacombs is almost upon us, which means it is time to brew. Deck building is always going to be the most fun part of any set, and today we’re going to look at Totem Shaman. While there have been some fringe versions of this in the past, it has never quite had enough tools to come together. However, Kobolds may have given it just enough cohesion to bring Thrall back into the meta. 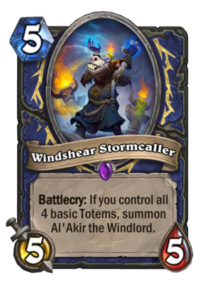 It is the time of the totem. Maybe. Over the past month or so, Token Shaman has fallen out of favor due to the surplus of strong taunt minions and powerful AOE. Yes, the AOE is getting stronger, but this list has also gotten numerous ways to play around it. It does not take a lot of bait out AOE as Shaman. Everyone is going to fear Bloodlust, and this list works to take advantage of that by jam-packing it with “army in a can cards” like Primalfin Totem, Kobold Hermit, and Master Oakheart. There is also the single Primal Talismans, which acts as a tech against the greedy decks you’ll see in the early days of the meta.

From there, you have two finishers in Bloodlust and Windshear Stormcaller. Lust is always going to be your first choice. However, there are going to be games where you simply don’t draw it. Stormcaller steps up into that role and helps you do something with boards full of totems. It is plan B, but it is a pretty good plan B to have. I expect you to have many totems sticking around in this one, and being able to push Al'Akir the Windlord with them is going to win a lot of games.

The curve of this one looks good because you have a decent amount of power at every step of the way. Things like Totemic Might and Primal Fusion may seem weak at first glance, but they both have massive potential in a deck like this one (especially with Wicked Witchdoctor). Buffing up Flametongue Totem or Primalfin Totem gives you real power and can swing an entire board. Even something as simple as playing +3/+3 or +4/+4 for one is absolutely bonkers in a tempo build. The only outliers in terms of mana are Al'Akir the Windlord and Master Oakheart. However, midrange lists (which this is) often get to the top of their curve, and both abilities are too strong to ignore. Oakheart in particular gives you yet another way to refill your board and punish your opponent when they’ve burned removal.

This list may seem like all of the totem-related cards jammed into a deck. And it is. However, there is a focus here. This does what Token Shaman has done, but it does it better because you get to take advantage of strong synergy between cards. This isn’t just “jam guys until you get Bloodlust.” It has multiple paths to victory, and that type of versatility is very powerful.

This deck is a lot like Token Shaman, which means it is going to mulligan in the same way. You want to find all of your opening minions and then rapidly build from there to set the board. Tempo is king here. Always keep Fire Fly, Jade Claws and Kobold Hermit. Flametongue Totem is good with any opening minions when you’re playing other tempo or board-focused decks, and you want to keep Mana Tide Totem with the coin or a good curve. Jade Lightning and Wicked Witchdoctor are always good when you can curve into them, with or without the coin.

Your support cards like Primal Fusion and Totemic Might should only be kept if you can get great value off of them early. Maelstrom Portal is for aggro decks, or ones with pirate openings, while Bloodmage Thalnos should only be kept if you have an early portal against a swarm or tempo build. Primal Talismans is good if you have a strong opening against a slower class like Priest. 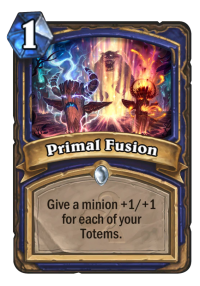 The goal of this one is, like so many Shaman decks of the past, to swarm the board. You want totems, you want as many as possible, and you want to make sure they all stick. Then, once you have the board, you need to push and use that tempo to build into your bigger finishers. That should be familiar to people who have played Midrange or Token Shaman in the past. However, this one differs a bit in that you always want to prioritize trades over damage. Your finishers do a lot of work, and you should lean on them. That will give you the ability to pace other board-focused decks without needing to burn too much value. Clear as much as possible and force your opponent back into corners where they need to burn good cards on relatively weak boards (i.e. four basic totems or an army of freely-generated tokens.)

As mentioned, another big part of this one is knowing how to play around AOE. Shaman swarms decks have a massive advantage in that their opponent will clear weak boards. Capitalize on that by doing everything you can to set up situations that are just on the edge of being dangerous. Three totems won’t seem that terrifying to your opponent, and they won’t likely bait out a mass clear. That works in your favor because it then sets up another totem roll into Flametongue Totem/Totemic Might/Primal Fusion. That type of quick burst is what this deck feeds off of, and you need to constantly look for it.

There you have it. Token Shaman has dropped off quite a bit over the past few months, but there is some real power here. It is not going to be easy to climb into an AOE-filled meta, but I believe this deck has enough tools to do it. Your opponent is always going to be trying to outguess you, and if you can push the board correctly, you should take them down. This deck could potentially go harder into the Jade package, and their might be room for pirates or Evolve as well. Those choices are up to you, but I definitely think the full totem synergy is the best way to go with this list in the coming meta.