Secret Hunter has been an archetype that rarely saw the light of ladder. The last competitive Secret Hunter was back in Karazhan, where Cloaked Huntress was first introduced. The deck generally relies on the class’ secrets to keep your opponent far back while you fill the field with minions and focus on running your opponent’s life dry as fast as possible, something Hunters are adept in doing. This classifies the deck as an aggro deck. This Secret Hunter is basically the same strategy, but it packs Deathstalker Rexxar in the event that your opponent starts getting ahead so that you have decent late game options in the form of Build-A-Beast.
This guide will walk you through mulligans, combos and details about each card and why it was included in the deck. It will also mention cards that didn’t make the cut and explain the reasons behind said choices. It’s good to mention that this deck is very cheap, it has one legendary and no epics, so it’s not a bad choice to devote your time into trying this out since it won’t cost you much dust, if any.

The deck basically consists of three different types of cards:
1) Secrets
2) Cards that benefit from Secrets
3) The rest of the deck

For the purpose of making this guide easier to understand, I’ll seperate this synopsis into three different sections each dedicated to explaining the purpose of the cards that fall in each of the aformentioned categories.

The bread and butter of the deck, Hunter’s collection of secrets have always been average compared to the other classes. However, they’re the cheapest to play and usually generate minions. Each Secret serves a similar purpose in this deck, the only difference is that there are times when one secret is strategically better than other options you may have in your hand. Nevertheless, all Secrets included in this deck are supposed to prevent your opponent’s attempts to move ahead and to allow for the cards in the next section to be used to their fullest. The list is as follows: 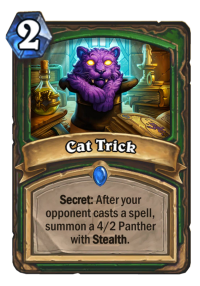 Karazhan’s addition to Hunter’s collection of Secrets, Cat Trick spawns a 4/2 minion with Stealth the minute your opponent activates a spell. This deck lacks many minions, so any minion-generation cards are very important. This card doesn’t have a “perfect moment” per se. You should generally prioritize using it when you think your opponent is going to play a spell so that you don’t fall behind, since a 4/2 on turn 2-3 isn’t the smallest of threats. 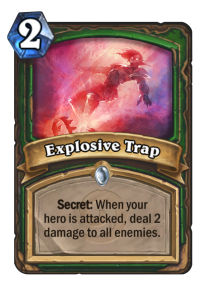 Explosive Trap is the least important of the Secrets present in this list, so it’s generally adviced to save it for the right moment and just Hero Power instead. Explosive Trap activates when your hero is attack, in which case it will deal 2 damage to all enemy minions. It serves as a way to reclaim the board and a couple of extra damage to your opponent’s life, since there will be a point in game where you’re just trying to reduce him to zero. 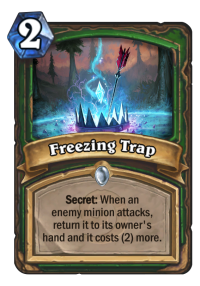 A trickier Secret to play, since its activation might just benefit your opponent. Freezing Trap returns the first minion that attacked you or any of your minions to your opponent’s hand with the added effect that it now costs two more. Now, returning a huge late-game minion back to the hand is incredible, obviously. Returning a smaller minion is good if it saves your own minion or if it leaves your opponent behind by a lot. But what happens when it sends back a minion with a very dangerous Battlecry? What happens when your opponent has multiple minions on the board and he attacks with the weakest instead? These are important factors to consider when setting Explosive Trap, since it’s the easiest Secret to backfire on you. 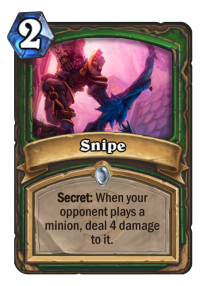 Snipe Is best used when you already have board presence early on, so that you can solidify your position ahead of your opponent. In the late game it’s not really that effective since minions tend to have health above 4. Once an official meta for Hobolds & Catacombs has been established, some decks will have certain “turns” where a specific minion is played like Mage’s second turn, where they’re more likely to play Arcanologist to pull Ice Block out of their deck. These are by no means 100% bulletproof, but certain classes tend to favor certain moves on certain turns – therefor, it’s more likely that you’ll encounter minions that get removed by Snipe then. 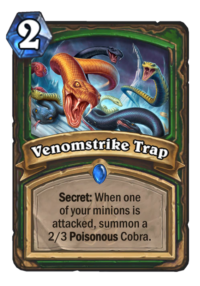 The King of the Scourge has passed, but he left us a welcome addition to this deck in the form of Venomstrike Trap. Although Snake Trap, the previous candidate for this position, offers you two more minions the Poisonous trait this Cobra has forces your opponent to either make an often unfavourable trade or to see their best minion falling to a miere 2/3 Cobra. This Secret is more effective later in the game so it can bring down bigger minions, but a 2/3 body in the early turns isn’t bad at all. 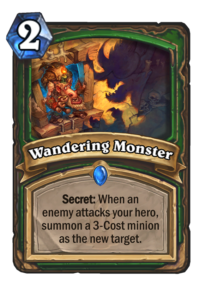 Lastly, we have our newest addition to Hunter, Wandering Monster. Now this is a very good secret, unless you have Rank E Luck. Once the enemy attacks your hero (which will happen sooner than later since the deck often lacks minion, giving your opponent opportunities to go face), you’ll summon a random 3-Cost minion as the new target. Now I haven’t checked every possible minion this can summon you, but there are some pretty good 3-Cost minions out there so the chance that the opponent’s monster will die is very high. There’s even a chance that your new minion might survive the attack, giving you a new minion to attack with on your next turn.