Thanks to Emb for allowing us to re-host this guide!

I want to thank Kolento and Zetalot for their sacrifice and the faith they have had in Anduin.

I will start with the mandatory proof : http://i.imgur.com/yAcNT73.png

Priest player since early beta, I almost quit the game after standard was release. Priest was in a decent spot pre Old Gods (I sneaked my first legend push farming Secret Paladins with a standard Priest Control deck back in the days). Eventhough I am a long time player I started playing ranked seriously less than a year ago.

Priest has been trash for almost a year now, while Tempo/Aggro/Midrange ruled the ladder. Time to pay. When ONiK cards were unveiled, it was fair to say that it was looking really grim for Priest. Priest of the Feast and Onyx Bishop looked decent, and I won’t resurrect our anger towards purify. However Reynad stated that Onyx Bishop was really underrated in his review and that gave me hope, while I was slowly losing ranks during August. 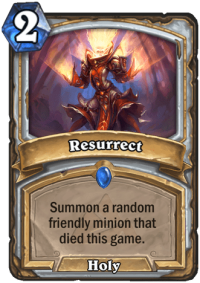 Straight to the point, Priest is now brutal. Not Shaman brutal, not Warrior brutal, but in its own way. Brutal with Anduin’s new strength: from the dead. Resurrect was okay-ish, before Onyx Bishop. Getting a cheap Injured Blademaster, Auchenai Soulpriest was cool. But with our new RNJesus, Barnes, tides have turned and by a lot. Sure, getting a 1/1 Ragnaros the Firelord, Ysera, or even a Blademaster is sweet on turn 4. But getting it resurrected consistently (and to a potential of 4 time in a row) is incredibly powerful in this minion-based meta. Sure, sometimes, it will resurrect Barnes the Lord himself (3/4 for 2mana, how can it ever be bad?) but if you play it turn 4 and get a Cairne, or Sylvanas, you have 50% chance of locking the board on this very turn and crush your opponent turn 5.

Is it fair ? Well, I don’t think so. Winning with a Chillmaw or Cairne Bloodhoof turn 5 is really cheap. Before, Resurrect was ok, a bit lackluster because of the lack of consistency. But now, since you have at least 4 rolls per game, it feels unstoppable. But I am not here to discuss about the power of a 3/4 summoning on average a 4/7 for 5 mana.

I won’t speak about Kolento’s decks I used to grind the ladder before legend, you can watch his stream as he loves playing priest.

(From most common to least common, high rating = good match up)

Midrange is definitely harder than Aggro. If Aggro mulligans well you lost just because Shaman. However it can swing quickly. Against Midrange, you have to take it slowly since you can burn your removal really fast and run out of answers against a 3/6 totem guy. Against the new iterations of evolves it’s really easy unless some disgusting RNG. This deck is favored against token heavy decks for one single reason: SW:H. Also, locking the board is made possible turn 5 with Onyx Bishop. Key is to have a turn 3 play. Turn 3 is game deciding: if you can make it awkward for the Shaman even by playing a naked Pyro, it’s fine.

Definitely the hardest match up among the common ones. Wild Pyro is by far the MVP of the matchup with his buddy PoTF. Chillmaw is great turn 7 since Hunters can’t reach 6 damage easily, so its counters PotW, and let you take some time. Smiting turn 2 is good even though you have a Wild Pyro in your hand. Always mulligan for Pyros, PoTF, and to some extent Bishop/Nova if you are confident for the early game.

Once Combo Warriors starts to become refined it might be tricky to play this deck. But against slow versions of Warrior, or Dragon Warrior deck is doing fairly good. You have many ways to get rid of the various win cons. Mulligan for Blademasters, PoTF, Bishop, Barnes, and Entomb if you are confident for the early game.

Druid is fairly easy, and depends on 3 main factors: how many 4/7 you can summon, how fast the druid can ramp and cycle, and how Yogg fist you. Yogg is a bitch and should be ban out of the game. On my way to legend I lost 3 time in a row, on the final boss, to Yogg. So yeah, just play Blademasters, and rez them you will be fine eventually. Druids tends to play slowly vs. Priest since they will try to make heavy turns. MVP is Bishop. This guys is too much HP for a single turn. Like most of the Yogg deck, don’t all in or you will get Yogg’d. Mulligan for Blademasters, PoTF, Bishop, and SW:D if you are confident for the early turns

Zoo is fairly easy because of the amount of token that will die to SW:H and Pyro. Also, like Druids, they have almost no answers to T5 Bishop into Blademaster/PoTF. Mulligan aggressively for Pyro/Smite/Shield/Resurrect. Against Renolock, it’s hard to say. You can pressure them with Blademasters and will always steal cool cards with Shifting Shade. But it might not be enough to beat them. You have to gamble a lot and force awkward answers, such as void before N’Zoth. Again, Bishop is the MVP bringing back high HP minions. Always mulligan for zoo, since it will be 90% of the time a Zoolock.

I only encountered aggressive mage with high level of burn. It’s a tricky match up and often, greedy Mage playing value card are easier than Aggro Mage than burn your face, since you don’t run flash heals. PoTF is the true MVP of the match up, eating funnel cake and Fireballs at the same time. You want to rez as many of this fatty as possible so always keep him. SW:H can also have insane value. Beware of Yogg though. And don’t be conservative with your removals, you are running more creatures than them. Your HP total is key. Get ready in the mid game (turn 9/10) to face multiple Fireballs and Torches, so keep the board as clean as your pants. Also, don’t forget that they don’t run Polymorph, so dropping Ysera on turn 9 can be a winning play. Mulligan for PoTF, Smite, Pryo and Rez.

Easy match up with the 4/7 rez train. Keeping a Shadow Word: Death is fine since one way to lose is a giant Edwin VanCleef early. Mulligan for Blademasters, PoTF, Bishop and Barnes.

Well it can go both ways. It’s just impossible to describe, beware of letting the board out of control since no Lightbomb anymore, and you play without Circles. You are heavily favored against non-N’Zoth versions, since Priest has almost no tools to deal with it, and even if they find a way to board clear, your card advantage with Shifting Shades is absurd. And you run too many threats with Cairne, Sylvannas, and Ysera. It’s just a draw game. Mulligan for Blademasters, Bishops, Shifting Shades, Entomb.

I only played against 2 or 3, and one concede right after Pyro, Coin,  Shield. Versus N’Zoth it’s a free win. You have Entomb, they don’t. Versus Midrange it can be a bit tricky hopefully you are running a decent amount of minions that makes more value than huge toads and such. Be prepared for midrangy/early N’Zoth that are easy to answer (with toads and other small shits). Not a very common match up anyway. Dragon Paladin might be tricky since midrange has always been a problem for priest. Mulligan for pyro, bishop, nova, shifting shades, blademaster, and other high value minion/cards).