Our Zoo Warlock deck list guide for the Ashes of Outland expansion will teach you how to play this budget list. This guide includes Mulligans, Gameplay Strategy, Card Substitutions, and Combos/Synergies! 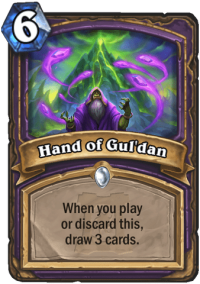 Zoo Warlock is one of the oldest Warlock archetypes, and historically the best way for the class to play on budget. By its nature, the deck is fast, playing lots of cheap cards, which tend to be of lower rarities. Of course, sometimes a Legendary or two is necessary, but not this time around. You can build a Zoo deck using nearly exclusively Commons & Rares. In fact, you could even skip Epics, but I believe that Magic Carpet is quite crucial to the deck’s success given how 1-drops make up half of your deck.

In Ashes of Outland, Zoo Warlock comes with yet another twist. The deck is built around the handbuff idea. Not only you get a great way to buff all minions in your hand for cheap (Imprisoned Scrap Imp), but also a way to draw a lot of cards without spending any extra resources (Hand of Gul'dan). This combination is really deadly if things work correctly. While it makes the deck’s early game slower, once it takes off, it can flood the board with buffed minions multiple times in a row, often adding more stats to the board than your opponent can answer.

It’s a really cool build, which is not the most powerful meta deck, but it’s certainly good enough to climb the ladder with.

If you have played Zoo Warlock in a past, it might take a bit to adjust to this deck. Because while in the older Zoo Warlock decks you wanted to tempo out and drop as many things on the board as soon as possible, it might not be the case here. You will have to balance between board presence and holding your minions for the sake of handbuff. Of course, if you already have Imprisoned Scrap Imp in your hand, things are simple – you wait. Yes, it’s better to wait a turn or two and draw more cards instead of dropping your 1-drops. The +2/+2 buff really makes a difference. Your 1-drops suddenly turn into minions worth 3-4 mana instead. For example – a 3/5 Taunt (Voidwalker -> Sen'jin Shieldmasta) or a 3/3 with Divine Shield (Argent Squire -> Silvermoon Guardian). 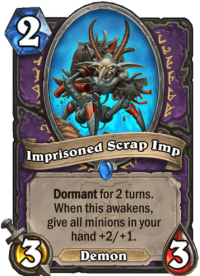 However, there are situations in which you can’t just wait. You play against a fast deck, you Scrap Imps are nowhere to be seen etc. In those cases, you need to play your 1-drops and act as if you were running a regular Zoo deck. Yes, it sucks, but if you just keep skipping turns and Hero Powering when opponent is hitting you in the face, you definitely won’t win the game. Given that 1-drops are great during the first few turns but have a rather poor scaling, your deck won’t be very powerful, but that’s what you have to do if you have no other option. You can still try to overwhelm your opponent with the sheer amount of them – for example, if you get your card draw engine, but you don’t get Scrap Imps, you can still win with a flood of 1-drops sometimes. But in most of the games, given how much you draw, you should be able to find at least one Scrap Imp (luckily).

One of the biggest advantages of this deck is how easily it can cycle. And I really mean it – I had games in which I drew my entire deck by Turn 7-8. This is mostly thanks to Hand of Gul'dan. Every time you discard it, you draw 3 cards. Normally discarding is a rather random process, but this build runs Discard cards which specifically target the highest cost card in your hand – Expired Merchant and Nightshade Matron. And since Hand of Gul’dan is literally the most expensive card in your entire deck, that’s what you will always hit if you have it. What’s even more interesting is that Expired Merchant gives you two extra copies of it when it dies, which means that you aren’t exactly limited to two copies you started with. While Matrons don’t copy it, as long as you have one copy in your hand, the card is absolutely nuts. It’s a 4 mana 5/5 with Rush which draws 3 cards (well, it discards one, so it’s technically +2). 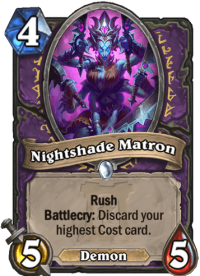 The hand state you’re aiming for is simple. You want to drop Scrap Imp + start drawing one turn. Keep drawing next turn (ideally triggering one or two Hands of Gul’dan so you have a pretty full hand). And the turn after your Scrap Imp wakes up and you give +2/+2 to everything in hand. Even better if you manage to find two Scrap Imps – then your entire hand gets +4/+4 and your 1-drops are literal monsters. Whether you had one or two Imps, here’s the moment your Magic Carpet comes handy. Since you spent two turns doing almost nothing on the board (hopefully you had Matron into Hand of Gul’dan, so you put at least some board presence, but it’s not always the case), you will likely fall behind. Even slow decks will try to develop something to fight against your buffed 1-drops. Spending another turn “doing nothing” (simply dropping minions) is often not an option, but Carpet gives you a way to drop your stuff AND clear your opponent’s board at the same time. Your buffed minions, with an extra attack point from Carpet, should be enough to fight against whatever your opponent might have. Alternatively, buffed Faceless Corruptor is also an option. Even if you don’t have mana to drop anything extra, you can immediately turn the 3/3 Imp that just woke up into two 6/6’s with Rush. That’s also a way to put a lot of pressure on the board while clearing some minions your opponent might have.

You usually have enough steam to drop 3-4 big turns full of buffed 1-drops. In many matchups, that should be enough. However, if your opponent plays a removal-heavy deck with lots of AoE clears, then it’s tough. Sometimes you will just run out of minions to play, and sadly there’s nothing you can do. That’s one of the deck’s main disadvantages. Try to hold back a little, but only a little. Play 4-5 minions at the time instead of full board of 7, this way your opponent will still have to AoE, but if he does, you might have enough minions for one more refill. 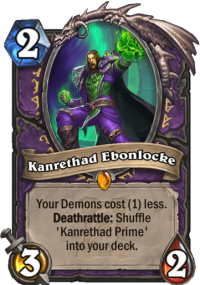 This Zoo Warlock build is very, very close to a full meta deck. In fact, you could probably run it as it is and no one would notice. There is, however, one Legendary that would improve it – Kanrethad Ebonlocke. The first body gives you some more tempo by letting you play your Demons for cheaper (might come useful during your Carpet turn), and the second is another board refill. While it summons minions in their unbuffed state, it’s not THAT big, but it’s still some more stuff on the board (on top of the 7/6 body of Kanrethad Prime) + you have a chance to summon back 5/5 Matron. And the best thing is that after the first body dies, it’s really easy to find the Prime version thanks to your draw engine.

Another card you might consider running is Zephrys the Great. Given how quickly the deck can cycle, in some games you will have it active very, very quickly. And then, having access to Savage Roar / Bloodlust will make closing out games so much easier (plus you can always get some big threat / burn damage / removal etc. depending on what you need at a given time). But Zephrys is really optional.