Our Totem Shaman deck list guide for the Ashes of Outland expansion will teach you how to play this budget list. This guide includes Mulligans, Gameplay Strategy, Card Substitutions, and Combos/Synergies! 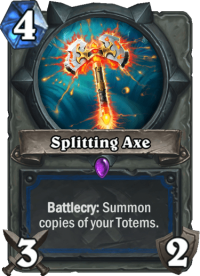 A working Totem Shaman build has been the holy grail among Shaman players for the last few years. People have tried to make it work so many times, and it failed every time. Not enough totem synergies, no way to close out the game, other builds simply being superior in every aspect. But if you were one of the players looking at those Splitting Axes in your collection, wondering when you might be able to put them into use… fear not, for Ashes of Outland has finally made your dreams come true.

While Totem Shaman is still an off-meta build, and it’s most likely not completely optimized, plus the meta isn’t exactly perfect for it, it’s actually working quite well. And what’s even better is that the deck can be played on budget without a problem. The only Epic card you need is the aforementioned Splitting Axe. While adding a Legendary (Vessina) should make it even better, it’s not necessary to play the deck.

Interestingly, the upcoming nerfs should work well for Totem Shaman. Tempo Demon Hunter is the worst matchup, and Altruis the Outcast is the card you hate to see most (so any nerf to DH is a buff to Totem Shaman).

We’ll have a full deck guide for Totem Shaman up in a few days, so I’ll keep things short here. I’ll link it here once it’s published. 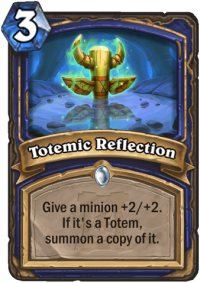 Totem Shaman is a board-oriented token deck with an interesting twist. Instead of trying to kill your opponent from the get-go, you might start slower and then set up some explosive Totem-copying combos. It reminds me a bit of other synergistic, tribe decks, especially Murloc builds (although less aggressive in the early game). Your gameplay is somewhat similar – you have ways to make your Totem stronger, AoE buff them etc. so you want to stick a few of them and keep snowballing. If your opponent doesn’t constantly clear your stuff, a single Totem can turn into an army in a very short time. For example, if you drop EVIL Totem on T2 and buff it with Might to 4 health, then copy it with Totemic Reflection on Turn 3, then drop Splitting Axe… and suddenly you have four copies of 2/6 EVIL Totem (minus whatever damage it took in the process). Now throw in a Storm's Wrath or Totemic Surge and basically win the game from there.

Of course, that’s more of a best case scenario and things don’t work as well in practice every single game. The biggest difficulty is sticking totems for Reflection / Splitting Axe. At the same time, I feel like it being a relatively unknown deck helps, because your opponent might leave a Totem behind, not expecting you to take off so easily. And honestly it is pretty easy, you need just two cards and 1-2 Totems on the board.

The deck requires some practice to play well, but being completely honest, your game plan is rather simple and straightforward, so even less experienced players should be able to play it quite well. 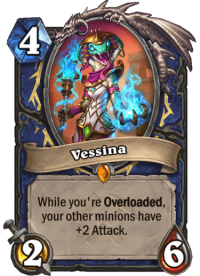 This section won’t be long either, simply because the deck is basically a full version. You can take it as it is on the ladder and expect good results once you master it. You can hit Legend with this build. There’s basically only a single Legendary card you might want to run in this build, and it’s Vessina. After playtesting the deck for a bit, I found Vessina rather useful and I would probably run her, but you aren’t going to lose THAT much if you don’t play her.

You can cut either Lava Burst or Bloodlust to include her. Both serve a similar purpose – game finisher. But the reason why I like her more than those two is that she’s also better to just slam on the board without lethal just for some value + 2/6 body. If she doesn’t get removed, she can get value over multiple turns too, which is a big advantage.

There’s also an alternative build with more 1-drops and Magic Carpet, but I think that it’s worse than this one.