Our budget Aggro Demon Hunter deck list & guide for the Darkmoon Faire expansion will teach you how to play this budget list. This guide includes Mulligans, Gameplay Strategy, Card Substitutions, and Combos/Synergies!

Demon Hunter class was introduced in Ashes of Outland expansion, and it quickly became a go-to budget class because of its powerful Common/Rare cards, as well as a Demon Hunter Initiate set players got for free. It’s an aggressive deck utilizing its 1 mana Hero Power as well as a plethora of cheap cards to kill the opponent as quickly as possible.

The deck has got a HUGE upgrade in Darkmoon Faire and is now – by far – the best cheap option available. Here’s the thing – Aggro Demon Hunter is pretty clearly a Tier 1 deck right now (unless it gets nerfed by the time you’re reading this), and full build is only 2-3 cards different from this one. The biggest upgrade to the deck was that it’s so easy to cycle through it right now. While Voracious Reader was already available, it wasn’t enough.

With the addition of Acrobatics (and Stiltstepper in the full build), you can now go all-in on the low curve strategy and run a deck full of 1 mana cards. They’re aggressive, and effective, but their biggest downside is that you run out of cards so quickly. Now, with multiple ways to refill your hand, it’s no longer that big of a deal, you can now. Besides that, the new, cheap weapon (Dreadlord's Bite) is a way better option in such a low curve deck, and the 1 AoE damage comes really handy in Aggro mirrors. Then, Wriggling Horror is just a generic, solid Aggro card. If you add all of that together, you’ve got yourself a strong, hyper-aggressive build that’s perfect on budget.

At the core, Aggro Demon Hunter is a very simple and straightforward deck. You want to throw your hand on the board, keep putting pressure on your opponent with minions and Hero attacks, and then finish the game with a combination of minion damage and “burn” cards like Twin Slice and Dreadlord's Bite. A proper curve is very important – you want to use your mana every turn as efficiently as you can. Luckily, with so many 1 mana cards in your deck, this shouldn’t be hard – there’s always something you want to play. 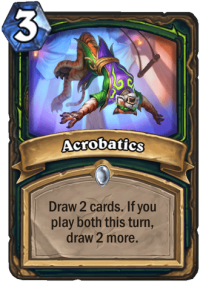 Now, the main “problem” with this deck is that with such a low curve, you run out of cards very quickly. But that’s not THAT big of a deal because you can refill your hand so easily thanks to Voracious Reader & Acrobatics. If you have Voracious Reader in your hand, you want to empty it as quickly as possible. Ideally, you want to play it with no other cards, but realistically, drawing 2 is good enough and sometimes even drawing 1 is okay if you have nothing better to do (e.g. 2 mana left, both of the cards left in your hand cost 3). In case of Acrobatics, you don’t really need to empty your hand, but rather get to a certain mana point. You don’t really want to play it before T5 unless you have to – T5 is the earliest at which you can play 2x 1-cost card if you draw those. In theory, the worst case scenario is drawing 2x 3-cost card, but that’s incredibly rare. Most of the time you’re going to see two 1 mana cards or 1 mana + 2 mana. If you play both of them, you draw 2 extra, which means that a single 3 mana card drew you 4 cards in total. And who doesn’t like a 3 mana Sprint? Of course, it doesn’t mean that you can’t use it earlier – e.g. if you have literally nothing else to do on T3-T4 or you already have a big board and don’t want to overextend, simply playign it to draw 2 is not the end of the world (after all, that’s already an Arcane Intellect). 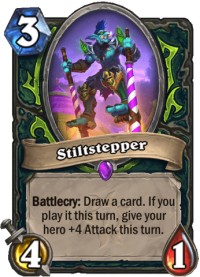 In case you run Stiltstepper (which I really do recommend – I know it’s an Epic and you might not have it, but it’s worth the Dust in this build), it’s a mix between draw & burn. You always draw, but if you play the card on the same turn, just like in case of Acrobatics, you gain +4 Attack. In the early/mid game – use that attack to control the board (or just hit face if they have no minions). Later – use it as extra burn. You never want to play Stiltstepper before Turn 4, which would allow you to play the 1 mana card you draw (and given that HALF of your deck costs 1 mana, it’s very common outcome). Ideally, you’d prefer to wait one more turn until T5 so you can also play your 2-drops.

And that’s basically your main game plan. You play on curve, try to drop your hand as quickly as possible and keep refilling it, push your opponent and try to kill them as quickly as possible. Do not give your opponent time to breathe – try to constantly pressure them. You can’t really deal with big Taunts (Kayn Sunfury is a good way, but only if you have lethal, and it’s Legendary anyway), and you can’t deal almost any damage through them, so that’s your main downside. Try to kill your opponent before late game, when they make their big defensive plays and possibly heal back up. One more thing that’s worth mentioning is Mana Burn / Cult Neophyte timing. Sometimes you will have no choice – e.g. play Neophyte on curve when it’s your only 2-drop, or maybe you Mana Burn to get rid of cards in your hand to draw more with Voracious Reader. Those are good plays, but those cards shine mostly when you time them right. Since you’re playing an Aggro deck, your worst enemy are mid game board clears. You make a big board and it gets cleared by a single card – that’s not something we can allow. Meta knowledge is important here, you want to learn what kinds of removals your opponent runs and how much mana they cost. For example, if you’re going into your opponents Turn 4, he’s playing Paladin and your board is full of 2 health minions… dropping another 2 health minions might not seem great, but it is if that’s Neophyte. That’s because you’re making Consecration cost 5, so they can’t play it this turn and you have another round of attacks. Then, next turn you might do the same, but with Mana Burn instead – you drop them down to 3 mana and they can’t play it yet again. Timing of those cards works wonders, you can completely disrupt your opponent’s game plan thanks to them.

Like I’ve mentioned, the deck is really close to a full build. Here’s how an example meta version of Aggro Demon Hunter looks like:

Stiltstepper and Kayn Sunfury are the only cards you’re missing. Kayn isn’t even necessary – some builds don’t run it, so don’t sweat it if you don’t own it – no need to commit 1600 Dust.

This particular version cut 1x Mana Burn and 2x Cult Neophyte to fit them, but it’s not the only option. Bonechewer Bruiser, Umberwing or Guardian Augmerchant are some of the other cards you can consider cutting instead. But just adding in two Stilsteppers is enough to make it a full meta version, and a REALLY powerful deck.