Our Rush Warrior deck list guide goes through the ins-and-outs of this Warrior deck that has been the best way to play the class in Forged in the Barrens! This guide will teach you how to mulligan, pilot, and substitute cards for this archetype! 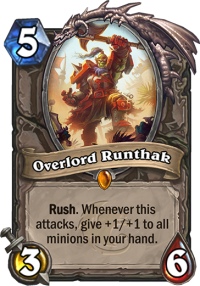 Another expansion, another quick balance patch to address issues in the meta, before they become too stale. The nerfs to Secret Paladin and Deck of Lunacy has allowed Rush Warrior to become one of the strongest forces in the meta, due to the deck’s ability to fight for the board consistently. The main power of the deck is its ability to utilize Rush minions exceptionally well. Rokara and Overlord Runthak help buff your minions (in play or your hand respectively), transforming your Crabriders or tokens from Bumper Car into serious threats.

With fun combos to utilize (like Playmaker + Rokara/Overlord Runthak) and an emphasis on board control, this is the deck to try out, especially if you are tired of losing to this meta’s overlord, Paladin.

Your goal is to get on the board as fast as possible and stay there until you can finish off your opponent. These are the cards you should be looking to have in your opening hand: 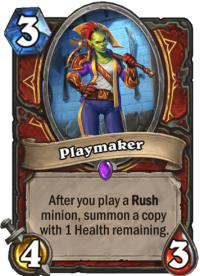 Although there are a couple of different variations for a Rush Warrior list (with some including E.T.C., God of Metal), this is one of the more successful ones in the meta at the moment. The deck relies on winning the board early on and then snowballing with Rokara, or using a combination of Playmaker and Rush minions to clear the enemy board and push damage to the enemy hero.

If your mulligan goes as planned above, you should look to buff Crabrider or any other Rush minion with Parade Leader. Use your weapon (gained either through using Imprisoned Gan'arg or Sword Eater) to protect your board and push damage to the enemy hero. If you have Parade Leader on the board, look to get Crabrider buffed. Similarly, with Playmaker on the board, you should look to get a copy of either Bumper Car (for extra tokens), Rokara or Overlord Runthak (to double their effects). A useful thing to keep in mind is that you can cast Shield of Honor to the copy you get with Playmaker, but if you copy Blademaster Samuro his effect won’t be activated. 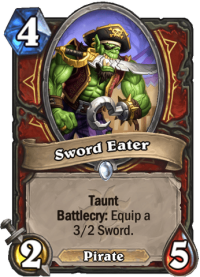 After you get control of the board, start pushing damage to the enemy hero whenever possible. Your goal should be to have the opponent at least around 8 health by turn 9, so you can finish him off with Alexstrasza the Life-Binder if he manages to stabilize. Don’t be afraid to use your weapon to do that, especially if you can get another one with wither Imprisoned Gan'arg or Sword Eater. You can even play them in the same turn, so you can get Imprisoned Gan'arg‘s weapon when the Sword Eater‘s one is used up.

Always (well, almost) drop Troublemaker on curve. The tempo he can give you is insane and even just pushing 6 damage to the enemy with his effect can help you drop your opponent’s health to 8, so you can follow up with Alexstrasza the Life-Binder next turn for lethal.

Towards turns 9-10, look to get your opponent at 8 health or below so you can use Alexstrasza the Life-Binder to finish him off. Keep in mind that her effect bypasses Ice Barrier against Mage, so if he uses Ring Toss while at that threshold and you either have Alexstrasza the Life-Binder or Ringmaster Whatley in hand, there is no need to attack into him and risk activating the armor. Instead, clear their board and use your Hero Power to mitigate some of the damage, until you can use her.

Rush Warrior is a pretty expensive deck. While some of the Legendaries come from Core Set (luckily), there’s still a lot of Epics & Legendaries that you really want to have:

And here are some of the cards you can replace them with: