Our Galakrond Priest deck list guide goes through the ins-and-outs of this powerful Priest build for the Ashes of Outland expansion! This guide will teach you how to mulligan, pilot, and substitute cards for this archetype! 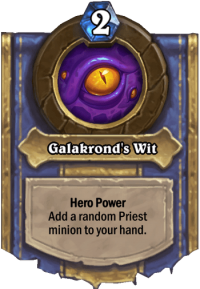 Priest has been at the very center of recent discussions about the general design development of Hearthstone. A small but vocal minority of the community continuously keeps on voicing its concerns in regards to the Resurrection theme of many Priest decks. That may be one reason why Team 5 decided to do a major Priest rework with the new Standard year – and although the outcries about Resurrection Priest didn’t stop, we can definitely see a positive outcome for the class thanks to the new opportunities given by the rework.

One archetype that profits from the numerous card changes is Galakrond Priest. Once a niche pick in heavy control matchups, the deck’s core received a ton of new cards to play with – not last thanks to the release of Ashes of Outlands -, turning it into a tempo-oriented archetype with the ability to outvalue almost every other deck in the current meta-game.

Check out alternative versions of this deck on our Galakrond Priest archetype page!

You may ask yourself: In comparison to Galakrond Priest in the Year of the Dragon, what exactly has changed?

The answer is simple: The current iteration of Galakrond Priest is able to create not only value in the long term but also tempo in the short term. This fact transforms into the general game plan, and we will try to look into a dilemma that turns into the strength of this deck – the decision between creating value and tempo. 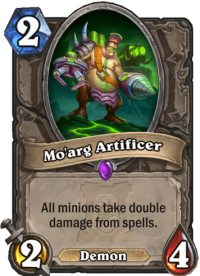 The early game minion package serves as a great example of this particular decision-making. First off there is Mo'arg Artificer, which obviously provides insane amounts of tempo. Tempo in this case defines itself as gaining a certain position faster than your opponent playing the same game – and a 6-stat minion on turn 2 fulfills every nuance of this definition.

However, you could turn Mo'arg Artificer into a spell-enhancing value machine, making almost every board-clearing solution much more effective in the later stages of the game. There will be situations in matchups where one line of play makes much more sense; but in the end, the availability of two very strong options alone makes this card a perfect fit for Galakrond Priest.

Next in line is Sethekk Veilweaver. A 2-cost 2/3 minion may look a tad weaker in comparison to Mo'arg Artificer, but it still contests the board against 2-health threats like Flame Imp or Battlefiend. Its active effect, however, makes it an insane value play in combination with discounted spells. Similar to Mo'arg Artificer, we have two healthy ways to play this card which fully rely on value or tempo decision-making. 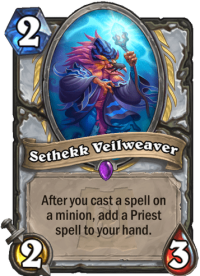 After laying the foundation of our general play strategy, a short look at the Galakrond package makes our game plan even more crystal-clear.

A total of six Invoke cards can be found in Galakrond Priest. Disciple of Galakrond offers cheap value while sacrificing early game stats, making it a mediocre turn 1 play. However, it should still be able to take a hit from early game threats, and a Galakrond Priest player will take that as an increase of tempo!

Ever since the release of Descent of Dragons, Shield of Galakrond turned out to be a very solid turn 5 play. The fact that it has Taunt plays into our perception of gaining tempo by not getting hit in the face while activating Galakrond’s effect.

Pretty much the same goes for Time Rip. While it doesn’t develop our own board presence, it counters mid game tempo plays from our opponent and creates value at the same time!

Kronx Dragonhoof may be one of the most important cards of this deck and exemplifies the theory of decision-making in terms of tempo  and value. As said in the mulligan strategy already, we want to draw Galakrond, the Unspeakable early in pretty much every matchup. However, its Battlecry effect could push us over the value edge in super-late game scenarios where face damage or an 8/8 with Taunt could decide the game.

Keeping our game plan in mind, Galakrond Priest’s removal spell package should be seen as some sort of “enabler” in terms of decision-making. For example, upcoming removal thanks to Breath of the Infinite on turn 3 turns Mo'arg Artificer on turn 2 into a much weaker play, because we clear the board either way. Shadow Word: Death can be a much cheaper alternative to Time Rip if we don’t need immediate value but counter-tempo and cost-effective turns. 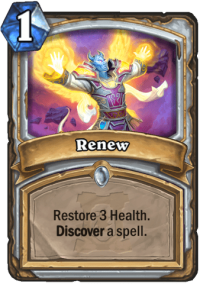 For late game scenarios, our old friend Plague of Death found a new significant other called Soul Mirror – a card that is so versatile that even experienced Priest players have to wrap their heads around it before playing it every single time. Stealing Deathrattle minions, filling your opponent’s board with bad Priest minions, or just a great way to completely clear late game board states – it all depends on the board and its attack and health values.

In addition to insane amounts of removal, new healing spells like Renew and Apotheosis enable easier decision-making based on improved survivability while increasing value at the same time. Late game Renew discover chains can refill your health in no time, and a well-timed Shadow Madness in combination with Apotheosis counters a ton of problematic board states in the mid game while recovering your game plan.

Between those two card packages lies Penance, a dream come true for every control archetype player, not least because of the silly interaction with Mo'arg Artificer that can literally decide aggro and control matchups alike.

The last spell to talk about is Thoughtsteal. With Northshire Cleric and Power Word: Shield gone, card draw is non-existent as we knew it. And while Priest minions can provide a good portion of value in the long-term, other class cards provided through Thoughtsteal will most definitely smooth out our curve or even lead to very high-value outcomes based on who we’re stealing from!

The main catalyst to our game plan is Fate Weaver. Remember how strong Emperor Thaurissan was? Well, Priest has access to this mechanic once again and should use it as often as possible! However, a 3/6 on turn 4 can already cause trouble on its own, which means that you should play it even without the effect if you need board presence in your current situation. 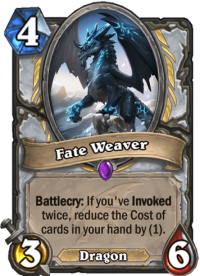 Thanks to its discount, a number of insane plays become available within one turn, making Fate Weaver the highest power level card in our deck without a doubt.

Next, there is what I would call the “trinity of specialized Priest legendaries”. Madame Lazul can be used for hand scouting and targeted card draw, while Mindflayer Kaahrj serves as another way to disrupt your enemy’s game plan. Since both these cards are expensive to craft, you should think twice about their real use within your game plan and take a look at the card substitution part of this guide. In fact, Holy Nova may have a place in this list purely because of these two legendaries begin super niche cards.

A card that turns out to be quite essential to Galakrond Priest is the third specialized legendary called Murozond the Infinite. Lots of players will argue that copying enemy turns leads to a high potential of death in the coming turn. But the amount of tempo gained by copying spell-heavy turns that involve cards like Skull of Gul'dan make up for the sacrifice of health points we make when playing Murozond the Infinite. 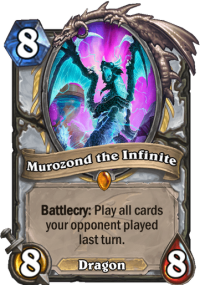 Sadly, it creates value up to a point where hand size becomes a real problem. Controlling and emptying your hand accordingly has to happen in control matchups. Don’t hold on value plays for too long because overdrawing important spells or expensive cards can cost you the game.

In the end, Galakrond Priest looks to be at the end of its development cycle, and its current iteration will soon have a solid place in the meta game. The general playstyle changed quite a lot compared to Descent of Dragons, and any player who likes the reward of good decision-making will love to play this deck.

Its performance against Egg Warrior and other tempo-oriented mid game decks without a “second plan” is unmatched, and with the current decline of Demon Hunter players on the ladder, Galakrond Priest becomes an even more valid choice to climb the new ranked system! 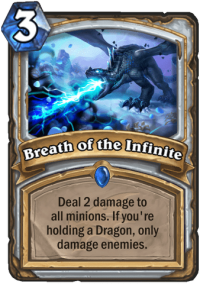 However, the dilemma – and in this case, it really is a dilemma – of timing your board clear answer just right makes every aggro matchup a nailbiter, and that is why early game board presence is so important. Especially in the Demon Hunter and Zoo Warlock matchups, Mo'arg Artificer and Sethekk Veilweaver pose sizable threats for the aggro player, so try to mulligan for those as much as possible.

The buff to Shadow Word: Death works wonders against Demon Hunter’s bigger threats while establishing a board for yourself, and a Soul Mirror into Priestess of Fury may be the most satisfying use of the card in the current meta-game.

Galakrond Priest has the right answers to every aggro deck – you just have to accept nut draws and look at the average, which in the worst-case becomes roughly a 50% win rate against Tempo Demon Hunter right now, the currently strongest aggro meta deck. The win rate against slightly less powerful archetypes like Zoo Warlock or Face Hunter improves dramatically and will improve even more if you learn the correct timings for your counter tempo plays. 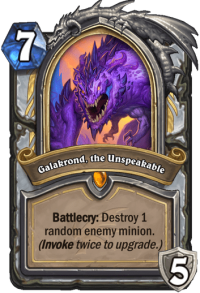 Control decks like Highlander Hunter and Spell Mage are Galakrond Priest’s most favorable matchups, just because you can throw infinite value into the ring while being able to control the board at the same time. And guess what? It looks like Galakrond Priest is, in fact, the cure to Resurrect Priest!

Games against Galakrond Rogue and Galakrond Warlock may turn out not just as one-sided. In these matchups it is key to activate Galakrond, the Unspeakable as soon as possible, because free value won’t come from nothing! Remember the silly Mo'arg Artificer/Penance combo for effective healing in fatigue situations, and learn to control your hand size to its most optimal value.