Our Face Hunter deck list guide for the Forged in the Barrens expansion features one of the top lists for this archetype. This Hunter guide includes Mulligan Strategy, Gameplay Tips, Card Substitutions, and Combos/Synergies! 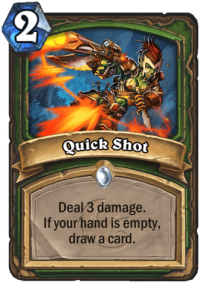 Face Hunter is one of the oldest aggro decks in Hearthstone history, with a simple gameplan: leverage early tempo on the board so that you can use Steady Shot the way it was always intended to be – the instrument of brutal, cold-blooded murder. Turns out, a constant source of two damage per turn on tap is a pretty effective way to close out games, and though the Core set rotation meant the loss of Classic staples like Eaglehorn Bow and Kill Command (which we’re contractually required to refer to as Skill Command if it’s topdecked for lethal), the archetype received more than enough help to make it one of the biggest beneficiaries of the early nerf cycle in the Forged in the Barrens meta.

We probably all knew deep down that Face Hunter would be a contender one way or another after it was revealed that Quick Shot became a part of the Core Set for the Year of the Gryphon. A cheap burn card with cycle potential, it was one of the most potent tools at the class’ disposal in the BRM days, and star cards like Kolkar Pack Runner and Warsong Wrangler pretty much pushed Rexxar over the top.

Remember: if the face plays Taunt, me still go face – which is actually possible now thanks to Piercing Shot and Trampling Rhino. SMOrc enthusiasts rejoice!

This deck emerged as one of the strongest builds shortly after the nerfs, with over 60% winrates in Legend at the time of writing. It’s well worth giving it a try as no hard counter has emerged to it yet.

Find more versions of this deck type on our Face Hunter archetype page! 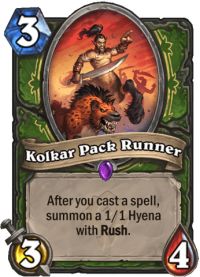 Since you have such potent finishers to work with, there’s little reason to abandon the battle for board control early on – in fact, your peerless ability to tempo out on the board using Rush minions with initiative is a big part of why this deck is so strong at the time of writing.

Kolkar Pack Runner is a huge part of this: imagine if you could target the knives of the original Knife Juggler and you can pretty quickly estimate just how insane this card is in aggro mirrors. Its synergies with Adorable Infestation and a Kolek roll off Demon Companion, or even something like Arcane Shot will guarantee you an early board lead, especially if you’re going second and can therefore also leverage the Coin.

Though you can definitely turn the screw and push for maximum face damage as the game progresses past turn three, this build is uniquely well-equipped to win by default by just maintaining board control: Piercing Shot and Trampling Rhino, cards which also make a huge difference in the slower matchups, mean that you can take your time to negate your opponents’ biggest threats, dealing face damage while also removing important minions with initiative. By this point, your copious amount of burn spells – which you should use liberally as removals in the early game should you need to do so – will be more than enough to secure the victory. 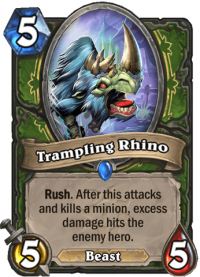 The beauty of this Face Hunter build is that it can keep up the pressure in the mid-game while also focusing on minion-based damage output in the first few turns. By pushing as much damage as possible early on, your ability to leverage Piercing Shot and Trampling Rhino skyrockets. In a very unusual fashion, your opponents’ minion presence can be a downside for them by activating these cards for you in a highly impactful manner. It is always correct to choose the latter from Warsong Wrangler: it is especially potent on curve but is otherwise also a more relevant choice than Wolpertinger would be.

Even if you already have one of them in your hand, the buff coupled with the instant draw of your deck’s top-end (which combines burn and tempo and board presence in one) is a great boon, a bit like playing Lorekeeper Polkelt into Dragonbane used to be.

Basically, you don’t run out of threats the way you’d normally expect a hyper-aggressive deck to by turn six. Almost every class will struggle to stay out of the range of your burn output by this point, with the only real exception of Rancor, which you should keep in mind against Warriors. Also, though the change makes little functional difference, don’t forget about Tracking’s rework when trying to math out your lethal outs!

You’ve got a bit of leeway in customizing this deck but the cards in question don’t provide real improvement. With just the four Beasts in the build, Scrap Shot offers little bang for your buck and Headhunter's Hatchet just simply isn’t as efficient as the alternatives. With no specific Hero Power synergies to work with, Tour Guide also serves as a dubious replacement option for cards in the featured build.

You can always use those cards as replacements if you’re missing something, but Epics & Legendaries in this deck provide meaningful upgrades, so it’s hard to replace them.