Our Evolve Shaman deck list guide goes through the ins-and-outs of this powerful Shaman build for the Darkmoon Faire expansion! This guide will teach you how to mulligan, pilot, and substitute cards for this archetype! 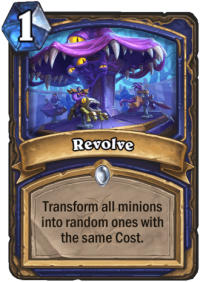 Madness at the Darkmoon Faire finally broke out, and with it came back an ancient class that hasn’t been seen on the tier lists for quite some time: Shaman.

The class with the most resilient and resurging archetypes over the last few years has yet again received another rejuvenating cure, and one of the lists that benefits the most from the new set is Evolve Shaman.

A well-put combination of new toys such as Revolve and Corrupt cards like Pit Master together with staple Evolve Shaman cards such as Desert Hare and Boggspine Knuckles create a tempo-oriented and unique playstyle that relies on explosive swing turns through evolving your board over and over again.

Check out alternative versions of this deck on our Evolve Shaman archetype page!

Vs Aggro And Control Decks 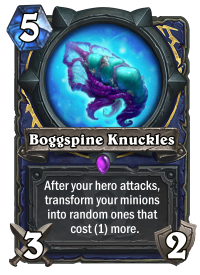 Looking at the mulligan section of this guide, it becomes abundantly clear what the general game strategy of this deck always was and still is: Survive the early-game and build insane board states over and over again.

However, mainly thanks to the last two expansion sets, Evolve Shaman’s detailed playstyle changes drastically. The biggest reason for that is Lightning Bloom. In high-rolling games, it enables us to evolve boards much, much earlier, and that lowers our overall average “game clock” by a substantial amount. That again improves our matchups against aggressive and control opponents alike – but let’s see how we actually beat the game first.

Evolve Shaman’s key turn is turn 5, because Boggspine Knuckles, our main evolve tool, costs 5 mana. Depending on your board state and the cards in hand, swinging on the turn you play this weapon makes or breaks your game plan. At best, we want to to

We feel that two of three of those goals should always be achieved when swinging with Boggspine Knuckles on the same turn it is played. 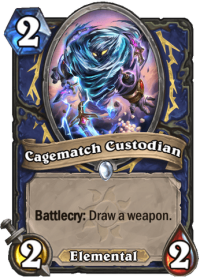 But for being able to play this glorious weapon, we need to have it in hand until turn 5 first. For that, mulliganing for Cagematch Custodian is of utmost importance, and we’re taking this little elemental into the Evolve package because all it offers caters to our Evolve gameplan.

The second card that can change up the entire board state is Revolve. The third spell of its “kind” after Evolve and Devolve, Revolve serves different purposes in our list: While still not as powerful as Evolve, it does enough to build up great pressure on turn 4 in combination with Desert Hare and Pit Master, or even earlier with Tour Guide or EVIL Cable Rat.

Another important use case is the mitigation of dangerous early-game boards against aggressive opponents. Demon Hunter in particular has tons of valuable 1- and 2-drops, and Revolve can defuse these problematic early board states with ease.

The evolve package is completed by Hoard Pillager, our “reload” card that resummons one of our destroyed weapons. All in all it not only provides great weapon value but also offers a token to be evolved into a powerful 5-drop. 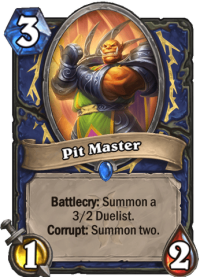 But back to our offense now: With Desert Hare, Dread Corsair and Mogu Fleshshaper we have three staple members of the Evolve Shaman minion package that have already proven their worth in earlier iterations of the archetype.

They are joined by a new minion called Pit Master that tries to take advantage of the new Corrupt keyword. Its corrupted version summons yet another token, making it a great and much-needed addition to the minion pool. While it may not be as strong as Desert Hare in terms of evolve potential, it does a better job at defending the board on curve against aggro opponents. 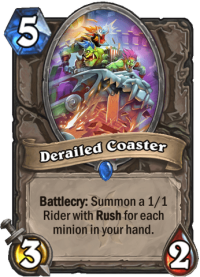 Derailed Coaster is another new addition to the minion core of this Evolve Shaman iteration. It’s basically a match made in heaven for Evolve Shaman, especially on turns where we have a Boggspine Knuckles charge prepared for it. Besides that, it’s also a great tool to remove problematic high-attack and low-health boards while providing a 5-drop that eagerly awaits to be evolved at the end of the turn.

The last member of the big minion package is Inara Stormcrash, the secret hero of this list. Its unique effect adds versatility to the whole archetype like no other card, whether it may be trade value, extra damage reach, or just higher attack values with our weapons.

In the end, Evolve Shaman may look very similar to earlier iterations – but it really plays out like a completely new mid-range tempo deck. The addition of ramp mechanics through Lightning Bloom together with the focus on weapon and board control make this archetype a great choice in the current meta-game. To be frank, there are many other iterations of this list out there – and they all have their purpose. Our version tries to adapt to the current meta that revolves around aggressive Demon Hunter archetypes, a matchup that doesn’t look good for several Evolve Shaman lists – mostly because they all succumb to early pressure.

However, our list features both Surging Tempest and Sludge Slurper, and also provides board-clear possibilities through Instructor Fireheart. With those minions, aggro matchups should be much easier to overcome. Remember to use Pit Master and Derailed Coaster on curve and ignore the potential evolve value if you’re facing a problematic board state, and never be too greedy on using Revolve very early to defuse early-game threats.

Evolve Shaman thrives against mid-range and control decks. The ability to build up tempo over and over again will wear out even the most controliest of control archetypes, while our early-game snowball potential is unmatched.

Allow yourself to get greedy with the mulligan, because miracle evolve turns involving Lightning Bloom and Dread Corsair will almost always win you the game no matter what. 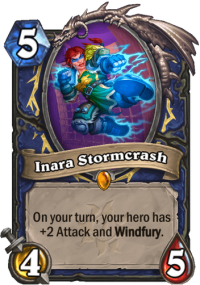 The deck is not THAT expensive, but it does run some. Here are them with theor possible substituations:

There are also a few tech cards you can consider adding to your deck (some of which you can use to replace the missing Legendaries):