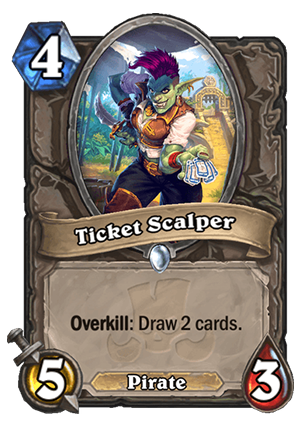 It’s the first Overkill minion we’ve got, and it’s a classic example of a high risk / high reward card. Because a 4 mana 5/3 that draws you 2 cards is absolutely amazing, and that’s after you trigger the Overkill once. Trigger it twice and it will be absolutely nuts, one of the best cards in the entire game. The good news is that the minion does not have to survive in order for the Overkill to trigger. So if you attack a 4/4 minion and both die, you still get two cards. However, the trick here is that even triggering it once won’t be easy. 3 health minion on Turn 4 is very easy to clear. And here’s the catch – Overkill can only trigger on your own turn, which means that if your opponent runs his 3/2 minion into it, you won’t draw anything.

So in order to make it work, you need to play it, wait a turn and hope that it lives, then trade it into something while overkilling it. That’s really difficult to do, and I suspect that in practice it won’t work very consistently. Nearly every deck has a way to clear a 3 health minion on Turn 4 – aggressive builds have weapons and early minions, while slower builds have spells. It will die to most of the things that isn’t meant to kill 4-drops – e.g. Lesser Amethyst Spellstone will kill it without any upgrades, and it will also die to Flanking Strike – both of which are usually used against 2-drops or 3-drops.

Another difficulty is that your opponent will have to actually play a minion you can overkill into it most of the time. Because if he already has a 3/3, 4/4 or something like that on the board, he will just trade it into your 5/3 and you get nothing extra. So you need to drop your Ticket Scapler, and THEN your opponent has to play a minion that you can overkill. Sure, sometimes it will be the only play they can make anyway, but most of the time they will either drop something you can’t Overkill that easily (like a 3/6) or just remove your minion first before playing their own stuff.

The Pirate tag is a nice bonus, but is it really relevant? It doesn’t seem like a great fit into Pirate decks, which are meant to be aggressive. In a Pirate build, you prefer going face and not trading, at least most of the time.

It has some synergy with buffs (but if you aren’t buffing it on the same turn, it will probably die, and if you are, you’re not using your buffs efficiently) and with cards that give minions Rush (e.g. Rocket Boots or Charge), but it’s still a 2 cards combo that might not work that consistently.

Overall, it seems like a card that is great in a “perfect case scenario”, but this kind of scenario won’t happen consistently enough for it to see play. There are just too many ways to counter the card draw. The only upside is that you might sometimes force your opponent into making suboptimal plays. Like when it’s turn 4 and he wants to drop Saronite Chain Gang, he might be forced to play something else instead (or even not play anything at all).