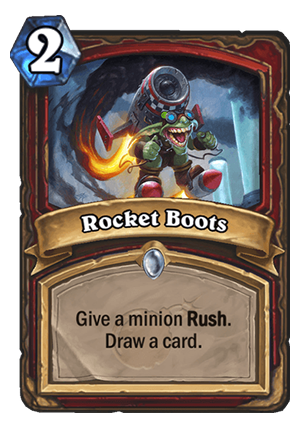 Rocket Boots is a 2 Mana Cost Common Warrior Spell card from the The Boomsday Project set!

Give a minion Rush. Draw a card.

This is the happiest moment of Grik's life. We'll miss him.
Tweet

When playing WoW, I ALWAYS picked Engineering because I loved how fun it was, and Rocket Boots were one of my favorite items (and well, later enchantment). Super fun to play in PvP, could do some crazy stuff with them.

As for the card. Giving minion Rush is theoretically worth 1 mana (Charge, which should just be renamed to Rush probably), but the card doesn’t see play. However, adding a cycle might make it actually worth it. It’s like Paladins never played Hand of Protection, but Potion of Heroism is played in slower builds just because of the cycle.

However, the thing is that Warrior doesn’t really struggle when it comes to cycling. It’s the best class to put Acolyte of Pain into and it has a lot of extra ways to draw cards, including Battle Rage.

That said, it would make sense in some kind of Combo Warrior deck, which wants to cycle as quickly as possible. 2 mana cycle with a minor effect would fit right into that kind of build. For example, you could play it with Wild Pyromancer for what is basically a Swipe, or with Acolyte of Pain I’ve mentioned already to cycle 2 cards and activate Execute on some bigger minion. But I don’t think that any deck right now would really want to play this card, it’s average.