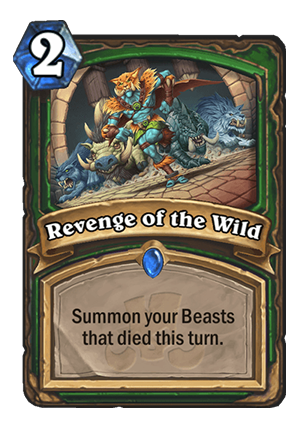 Revenge of the Wild is a 2 Mana Cost Rare Hunter Spell card from the Rastakhan's Rumble set!

Summon your Beasts that died this turn.

My roommates only use Revenge of the Passive Aggressive.
Tweet

Revenge of the Wild Card Review

The card is pretty insane in some way, but I’m still not sure what kind of way it is. Summoning all of the Beasts that died this turn for just 2 mana is a crazy effect. The thing is, even getting a single minion like Bearshark or one of your Animal Companions back is already good tempo play. Getting one of the biggest Beasts is straight up insane.

A thing that a lot of folks are talking about is Flark's Boom-Zooka, but I don’t think that it’s going to work. Any Flark’s deck is still incredibly clunky. You would need to build a deck with only big Beasts in it (no other minions at all), don’t draw them, then play Boom-Zooka and this on Turn 10. In theory, if you get 2x Charged Devilsaur and King Krush, that’s 2x 7/7 + 8/8 on the board, all of which can immediately attack. But that’s a pipe dream – the chance that they will still be in your deck by Turn 10 (assuming the best case scenario of drawing this + Boom-Zooka before T10) is incredibly low.

Recruit Hunter might be a deck to play this in, but it’s not 100% optimal. On the one hand, you do have some big Beasts, but on the other, they often die on your opponent’s turn, not on yours. Unless you can stick a 5/5 Devilsaur and trade it on your turn, the card might be dead until much later into the game. Also, the deck runs Prince Keleseth, but it’s probably the “worst” deck for Keleseth out of all current Keleseth decks, so cutting it wouldn’t be the end of the world. But then again, getting a 2 mana 5/5 in the mid game after you trade your Devilsaur, or getting a 2 mana Witchwood Grizzly / Charged Devilsaur later in the game is tempting.

But in the end, the deck I think would want to use this most is some kind of Midrange Hunter, maybe Secret Hunter. Those run quite a lot of Beasts, and like I’ve mentioned, just getting a single 3-drop is worth it, although you would aim for more. For example, it might be a good follow-up to a Spellstone that wasn’t AoE’d. If your opponent has dropped some minions to trade into your 3/3’s, you can trade them off first and then revive with this card.

It also has nice synergy with Unleash the Hounds – you can double it for extra 2 mana assuming you traded all of your Hounds. If you happened to trade another Beast on the same turn, that’s even more value.

Overall, the card has a lot of potential and I would be surprised if it didn’t see any play over its time in Standard. In a Beast-heavy deck, it doesn’t take a lot to get value out of it, and the tempo swing potential is massive after certain turns. The only downside is that it’s a bad card to topdeck if you have no Beast to trade, and that it does nothing when you’re behind on the board and can’t stick a minion, because everything you play dies right away (unless you can combo it with some Charge/Rush minions, that is).