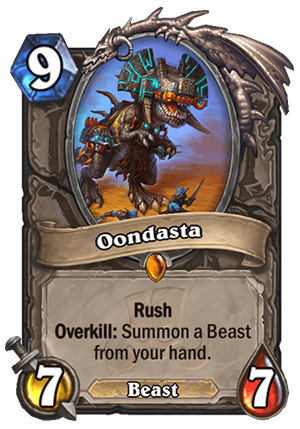 Rush Overkill: Summon a Beast from your hand.

Adorning devilsaurs with armor and feathers is a respected job in troll culture, although it has a high turnover rate.
Tweet

I’m 99% sure that this card will see play. Deathrattle Hunter is an already existing, strong archetype and it fits right in. The deck runs Kathrena Winterwisp and a small (in quantity, not mana cost) Beast package – usually 4 minions. Kathrena is obviously an insane tempo play – given that the Beasts deck runs cost 6 to 9 mana, the card pulls two huge bodies on top of the 6/6. However, drawing some of the Beasts before playing Kathrena can get pretty awkward. For example, Witchwood Grizzly is still great vs Aggro when they run out of cards, but it can be nearly unplayable against slower decks. This could solve that issue – pulling it straight from your hand would give you some tempo and circumvent a negative Battlecry. Of course, getting Oondasta straight from Kathrena is great. It’s not as aggressive as King Krush or even Charged Devilsaur (which can go face in that case), but it creates an even harder to deal with board.

But Deathrattle Hunter might not be the only deck that would want to play it. Like I’ve mentioned when reviewing Ironhide Direhorn, I could see some kind of Big Beast Druid happening. Druids can get to 9 mana more easily than other classes thanks to the ramp, and it would be an insane tempo swing if you pull out something like the 7-drop I’ve mentioned earlier or – even better – a Tyrantus. Witching Hour reviving this is obviously nuts, but it giving you a 3 mana 7-drop or a 12/12 is also fine.

Overall, I really like this card and I think that it’s going to be powerful. I’m nearly sure that it will see play in Deathrattle Hunter (unless they get such amazing cards that they will drop the Kathrena + Beasts strat, but that would be too much for the ladder to handle), and I’m quite hopeful that it will find home in other decks too over the course of its run in Standard. Any deck running Big Beast synergy will want to play this. Heck, some slower decks can even play just Oondasta + 2x Witchwood Grizzly, which is already a borderline playable card even without any synergies. Grizzlies will be useful in Aggro, and you will be able to use Oondasta as a removal + way to pull them as 3/12 against decks that hoard more cards (e.g. Even Warlock).