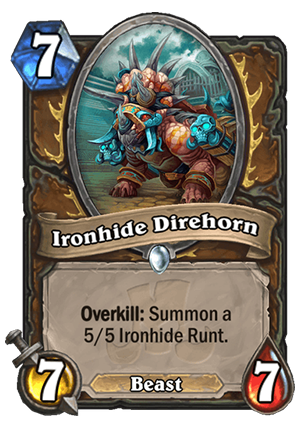 "Boy! Bring me my masks and skull rams."
Tweet

It’s a broken Arena card, and I mean it. Arena is a format where War Golem is a decent card (just about average), and single target removals aren’t that common. So this is AT WORST an average card, and at best a War Golem + a bunch of 5/5’s. Summoning just a single 5/5 makes this card top tier, and it’s not going to be that difficult. All you need to run it into a 6 or less health minion. It doesn’t even have to survive – minions still trigger their Overkill effects if they die while making the attack. In the late game, it might stop your opponent from playing small and midrange minion completely, so if he doesn’t have a big bomb or a removal he might be blocked out of the game.

But… since I’m mainly reviewing cards for the Constructed format, it’s obviously not as good out there. The problem is that there’s no way to immediately trigger the effect. If there was a consistent way to give it Rush, or a card akin to the Magic’s Prey Upon (or other similar cards), this would be so much better. As it is right now, it just seems too slow to work well by itself. The effect is indeed powerful, and you could really snowball the game with it, but even the most powerful effect is no good if you can’t trigger it.

That said, this card is a Beast, so I COULD see a Big Beast Druid being a thing with some more synergy. Nobody said that Witching Hour can only be used with Hadronox (it works very well with other high mana cost Beasts too), and it also has a nice synergy with the new Oondasta (getting it out of your hand for free is an amazing tempo play). It’s slow at 7 mana, but if you add it to the pool of Beasts and then revive it for 3 mana, it’s suddenly much better. I could see an archetype like that, but until we get some more synergies, I think that the card is below average.