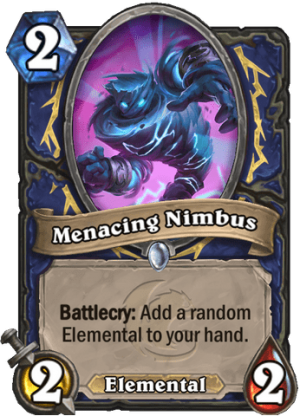 Battlecry: Add a random Elemental to your hand.

Menacing Nimbus is just about the most obvious card you can make to help Elemental Shaman. It’s a solid on-curve play, gives you extra value and has Elemental tag. Generally, early cards that have an okay-ish body and give you some value tend to be solid. The reason is that they can be dropped on the first turns, but also have some sort of late game scaling. You are generally pretty sad about topdecking let’s say Fire Fly on Turn 10. But this one? Not that much. Of course, it still depends on what random Elemental you get, but even if you get the Fire Fly, that’s an extra 2/2 body you have on the board. And then, there are lots of big and/or strong Elementals in the pool, including the new Electra Stormsurge.

There is no doubt that this card would see play in Elemental Shaman. Not only the deck has no good Elemental 2-drops at this point (Fire Plume Harbinger is very low tempo, and Murmuring Elemental is not really a 2-drop), but this is just really solid. Shimmering Tempest sees play in Elemental Mage, and Nimbus is just better – 1 more health, Battlecry instead of Deathrattle, and probably a slightly worse effect, but only slightly, because Elementals are always good to have in, well, an Elemental deck. The main issue right now is that there is no good 3-drop that needs Elemental synergy, so Elemental tag on Turn 2 doesn’t have that much value. Yes, we have a Thunder Lizard, but the card is really mediocre

So the card is above average, I’d say that it’s like 7/10 in Elemental Shaman… but the problem is that Elemental Shaman is just a bad deck. Unless it gets some strong synergies this expansion, or in the next one, it’s going to be the next pre-Un’Goro Taunt Warrior. Remember how Blizzard was adding more Taunt synergy to Warrior, all the way from TGT to Gadgetzan? And it never really worked, the deck was mediocre at best. Same thing with Elemental Shaman. It’s just too… fair. Fair decks aren’t great in Constructed, because they get beaten by unfair decks. By the decks that can cheat the mana curve, drop big minions early, flood the board time and time again, combo you down etc. Playing okay minions on the curve was a solid strategy back in the Classic, but not now. And so, Elemental Shaman needs some great synergies to make this card work.

That said, we also have another deck that might want to run it. It’s Even Shaman. Given that the deck has no 3-drops, 2-drop + Hero Power is your Turn 3 play. That’s why you want to run as many 2-drops as possible. And while the deck does have some solid 2-drops already, having another one to choose from wouldn’t hurt. Given that it comes with an extra value, you could even replace one of the higher cost cards to fit it in. After all, you CAN drop it on T2/T3, but it can also replace itself with something bigger, so you won’t run out of steam that quickly. Also, Even Shaman runs Earthen Might without any early game Elementals to play it on. This could be the one – putting a 4/4 on the board and adding two random Elementals to your hand is not the worst T4 play ever. Of course, whether it will see play still depends on other Even cards we see this expansion, but it’s a possibility. It wouldn’t be a deckchanger, like let’s say a Flametongue Totem. But it would be something like a Blink Fox in Odd Rogue. An okay on-curve play that gives you extra resources, not always great, but sometimes potentially game-winning (like, in this case, getting an Al'Akir the Windlord, or Kalimos, Primal Lord or even a simple Blazecaller can be huge).

All in all, if Elemental Shaman sees play, this card should see play. Assuming the deck won’t go Prince Keleseth route, of course. Other than that, might see some play in Even Shaman. But since Elemental Shaman doesn’t look great right now, and this card is not AMAZING in Even Shaman, I’d say that right now it looks right about average. Rating would increase with some high potential Elemental synergies, of course. 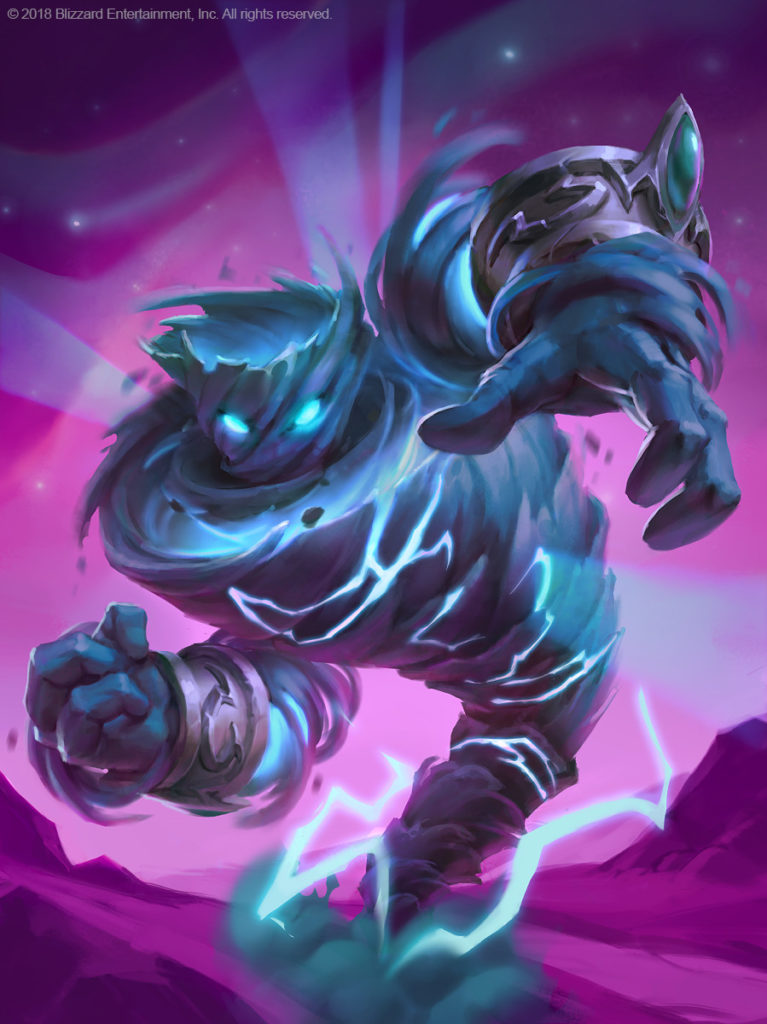