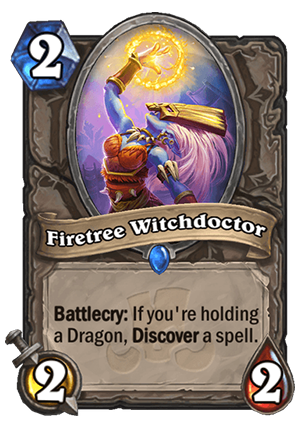 Battlecry: If you're holding a Dragon, Discover a Spell.

If your tree is on fire - stop, drop, and troll.
Tweet

More Dragon support, after Smolderthorn Lancer and War Master Voone for Warrior. However, since this is Neutral, it can also be played in other classes.

Let’s talk about Warrior first. The deck is starting to shape up already – we have a way to add a bunch of extra Dragons to the hand (Voone), Execute on a stick (Lancer) and now this. 2 mana for a 2/2 minion is not great, but given that it potentially gives you a lot of value it’s still good. I mean, do you remember how good Dark Peddler was? 2 mana 2/2 that Discovers is pretty solid. To be fair, spells aren’t the strongest part of Warrior class, but since this is discover, you should be able to snatch something good nearly every time. And in the worst case scenario, it’s a 2 mana 2/2 that gives you an extra mediocre card (having to choose from three bad or straight up unplayable cards will be incredibly rare). All in all, if Dragon Warrior becomes I think, I can’t fathom this card not seeing play.

However, while Blizzard seems to push a Dragon Warrior this time around, we already have another “Dragon” deck readily available. While Control Priest has cut on the Dragon synergies since it has lost Drakonid Operative, it still runs cards like Twilight Acolyte, Duskbreaker as well as a bunch of Dragon activators. And this seems like another card that would fit the roster. Unlike Warrior, Priest is much more reliant on spells and the class has A LOT of great spells you might want to snatch off this card. Extra board clear, a buff, value card, a way to summon or revive a minion, even another burn card like an extra Mind Blast.

An even better deck for this card would be a Spiteful Priest, but it hasn’t been viable since Spiteful Summoner‘s nerf. It would be especially good in this archetype, since it can’t put that many spells into the deck naturally, and has to rely on minions to do their job (like board clearing or drawing). But this one would fit right in. That said, I don’t think that it’s enough to revive this deck, and it has used Prince Keleseth anyway, so it would have to pick between those two (which might be a very hard choice).

Overall, basically any Dragon deck would want to play this card. It’s almost as good as Netherspite Historian, which was an amazing staple. Now we need a strong Dragon or two (for Warrior or Priest at least) and Dragon decks might be back on the menu.

Card rating: 9/10 in Dragon decks (useless outside of them)