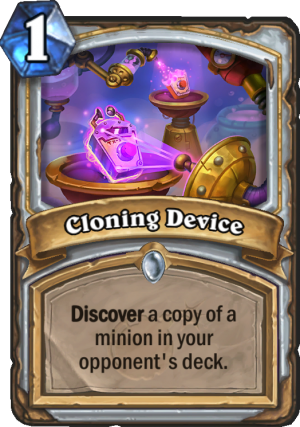 Cloning Device is a 1 Mana Cost Common Priest Spell card from the The Boomsday Project set!

Discover a copy of a minion in your opponent's deck.

Zerek got sick of fighting over the remote.
Tweet

This card seems very underwhelming, to be honest. If it discovered a copy of a minion in YOUR deck, it would make much more sense for its combo potential, but from the opponent’s? Not really, no.

Starting with the upsides – you get extra information. You can know what deck your opponent plays as soon as Turn 2. To counter that, though, you usually know what deck your opponent plays after he plays first card or two. Sometimes even right after the mulligan (Odd/Even decks). This could still be useful to peak at what tech cards he might be running, or to identify decks that are harder to tell apart (like Druid archetypes right now). Another upside is that you can snatch some late game minion from your opponent’s deck, potentially something that combos with your build too. Like, stealing Hadronox from Druid after you’ve already played The Lich King and Obsidian Statue might be really powerful.

And now onto the downsides, and this list will be much longer. It has no immediate effect. Yes, you can say the same thing about Shadow Visions, but with Shadow Visions you ALWAYS get a card you want, since you pick from the spells you put into your deck (and again, the card has a much higher combo potential because of that). The options you will be presented with will often be bad. For example, playing against an Aggro deck, you will very likely just get an aggressive minion, and that’s not very good. You can even not get anything when you play against Spell Hunter, or get this card in the late game. Even if you play against a slower deck, unless you snatch an universally good card like The Lich King, most of the minions in their deck will have synergy with THEIR deck, not with yours. You have to add +2 to the mana cost of the minion you steal. And so, let’s say that stealing an Elven Minstrel seems alright, but you need to remember that you’ve paid a total of 6 mana for it, not 4. It does not give you any card advantage, it’s a 1 for 1 card.

I’d rather play a Thoughtsteal to get an actual card advantage (despite not being able to pick cards), or Curious Glimmerroot for the 3/3 extra body on top of a random card from the opponent’s deck. Not to mention that if Chameleos doesn’t see play, despite giving you MUCH more information and options over a few turns, as well as not costing any extra mana to play, then I don’t see how this card will see any play.

The card is a classic Loatheb vs Rebuke. People overvalue this effect, because it was amazing on Drakonid Operative. However, Operative was so good BECAUSE it had amazing stats on top of the effect. Rebuke was also overvalued for a similar reason. Both of those might make more sense at 1 mana, but not really at two.

However, one more thing to consider is that “cloning” seems to be the Priest’s theme this expansion, so there might be some synergies. For example, a card that gets cheaper for every “copied” minion you’ve played, or a card that resummons the copied minions… if that’s the case, this might be better, so we’ll have to see.

Card rating: 2/10, possibly more in case a card that synergize with “cloned” minions get revealed 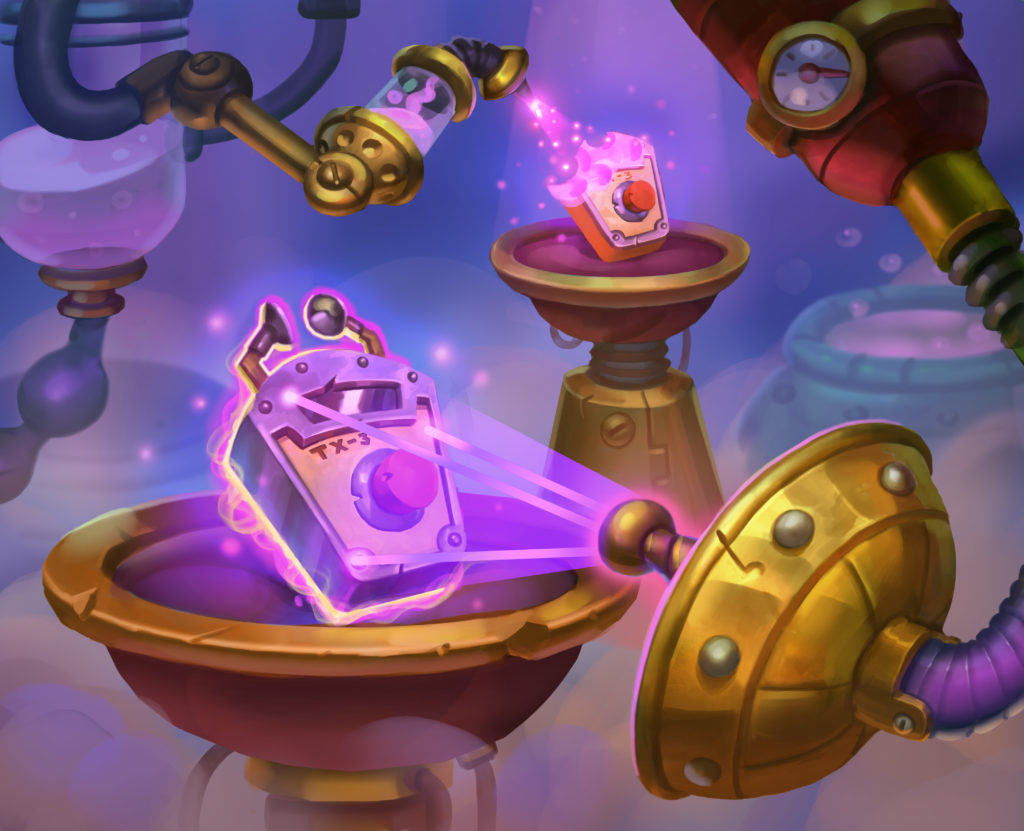