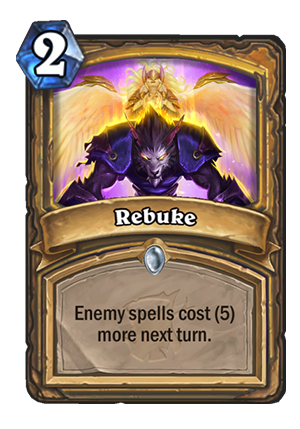 Rebuke is a 2 Mana Cost Common Paladin Spell card from the The Witchwood set!

That’s not something I expected, to be honest. It’s a Loatheb effect on a spell, which costs 2 mana. Before Loatheb rotates out of Standard, it was one of the most common and most powerful Legendaries. This card is not even remotely as strong as Loatheb – for just 3 more mana you had a 5/5 body attached, so it was playable (and solid) even if you didn’t expect your opponent to play lots of spells next turn.

This card is super interesting, but I don’t think it’s really good. I think that people are vastly overestimating this card. When playing as an Aggro deck (that’s most likely where you would want to put this card in), Rebuke will be good only in one specific scenario – you’re ahead on the board and you play against a slower deck that can clear your board with a spell. You block it for one turn. Well, it can also be used in a slower deck vs combo decks, but that’s not really too reliable and not something you’d want to add to your deck (as it’s often a dead card).

This card isn’t good, because it has very limited uses. Like, let’s say that you put it into your Aggro deck. If you play vs an Aggro or Midrange deck, you probably won’t really find it useful most of the time. Sure, you might make them play sub-optimally for one turn, but you also spent 2 mana (and a card), so your turn was weaker too. It’s only really useful in an Aggro vs Control matchup, and not every single one – minions can still clear the board, so it won’t stop e.g. Duskbreaker.

The fact that it costs a card and comes with no body or a way to cycle will make it a dead card too often, I feel. It might be used as a tech card in faster Paladin builds, a meta call basically. If you face slower decks that AoE your board all the time, you can tech it in. So I wouldn’t call it useless, but it’s very situational and I don’t think it will be that good. Or rather, it will have its moments, but more often than not it will just be a bad card in your hand.

Overall, I feel like people are looking into the “best case scenario” too much and ignoring the fact that this is not helping you get into the state where this effect is good. It’s terrible in your opening hand, it’s terrible if you have weak board or you’re behind in general, it’s terrible if you play vs another fast deck. There are simply significantly more situations in which this card is bad than good.