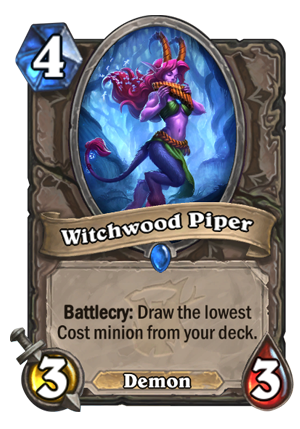 Witchwood Piper is a 4 Mana Cost Rare Neutral Minion Demon card from the The Witchwood set!

Battlecry: Draw the lowest cost minion in your deck.

3/3 for 4 that draws a card is average. However, that card being a specific kind of card (so-called “tutor” effect) makes it significantly stronger. For example, if some cheap minions (1-2 mana cost depending on the deck) is a part of your combo, you can reliably draw it. For example, in Exodia Mage you could draw either Arcane Artificer or Sorcerer's Apprentice. If you play a combo Priest, you could draw either Northshire Cleric (which is pretty good card even in the mid/late game) or let’s say Radiant Elemental.

You COULD potentially run a Prince Keleseth deck and tutor it if you don’t draw it earlier, but running a Keleseth deck without 1-drops doesn’t make much sense.

The main advantage of this card is that, depending on how you build your deck, you always know what you will draw. Regular draws are random, so you can’t really plan around them. With this, if the lowest cost minion in your deck is 2, it’s Turn 4 and you have a 3 mana card in your hand, you might plan your next turn already – I draw that 2-drop and then play the 3 mana card alongside. With a regular draw, you might not get a luxury of planning ahead like that.

However, this is also a disadvantage at the same time. If you don’t need that specific 1 or 2 mana card, you might prefer a regular draw instead – e.g. if you play vs Aggro you might want to draw an AoE board clear instead of your low cost minion, even if it’s a part of some combo.

In an average deck, this card is comparable to Gnomish Inventor, which obviously doesn’t see lots of play. However, it might be much better in decks that specifically want to draw low cost minions, because they either synergize very well with the rest of their deck, or are a part of some kind of combo. This will probably be a niche card, but it will be good in the decks that can take advantage of this kind of effect. 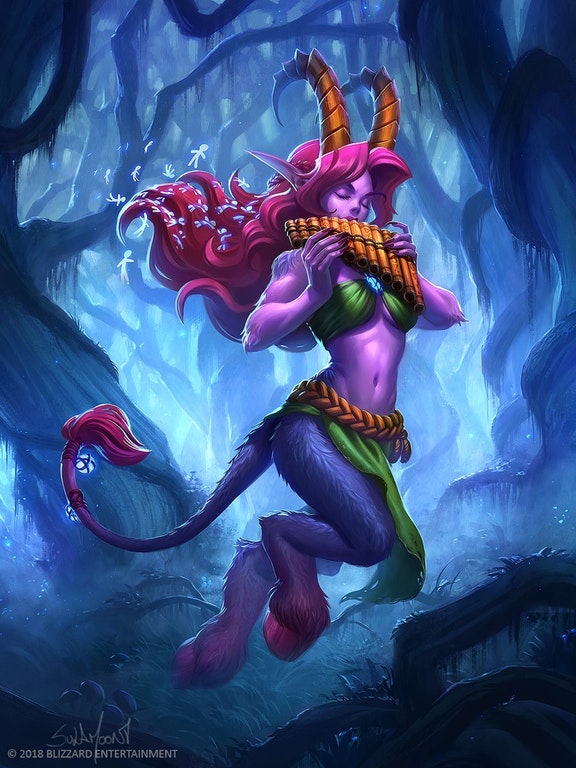