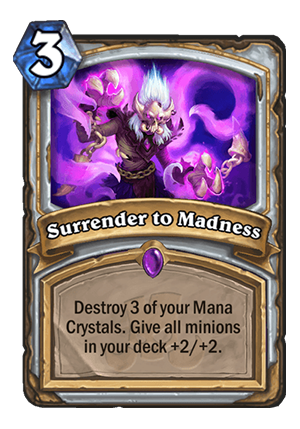 Surrender to Madness is a 3 Mana Cost Epic Priest Spell card from the Rastakhan's Rumble set!

Destroy 3 of your Mana Crystals. Give all minions in your deck +2/+2.

This card is super weird. On the one hand, getting +2/+2 deck-wide buff is amazing. On the other hand, losing 3 mana crystals is like losing the game. There are actually two kinds of decks I might see trying it, but I honestly don’t think it will work in either of them.

The first one is a super fast deck with lots and lots of cheap minions. You play this on T3 and then start topdecking cheap, buf buffed minions. Like 3/5 Dire Mole or 3/3 Argent Squire with Divine Shield. The problem? Not drawing this card. If you play a deck full of 0-3 mana minions, you run out of cards incredibly quickly. And while they’re good in the early game, they become irrelevant quite quickly. You would end up with strong 3-4 turns and then you would run out of stuff to do, getting completely outclassed by any other deck. Another problem – your opponent would be 3 mana crystals ahead. Your buffed 1-drops would have to fight against their 4-drops, your buffed 2-drops against their 5-drops etc. And despite the +2/+2 buff yours would still lose most of the time. Oh, and it doesn’t affect your hand – so you rely on topdecking the right cards. Not a great strategy.

Then, another kind of deck is some minion-heavy, slow Midrange deck. Something along the lines of Spiteful Priest (but obviously not Spiteful, because this card would ruin it), Then you wouldn’t play it on the curve, it would be a late game play when losing a few mana crystals is not that big of a deal. If a big part of your deck costs 3-7 mana, then playing it on Turn 10 wouldn’t matter that much. But here the problem is that it also has no immediate effect, and you would have to wait until absolute late game to use it.

Losing mana crystals is a big deal. Warlock cards that destroy a single mana crystal are often hard to play, because they ruin your curve. This destroys 3, crippling you way more. The card has some meme potential, but I don’t think it’s playable in a competitive deck. 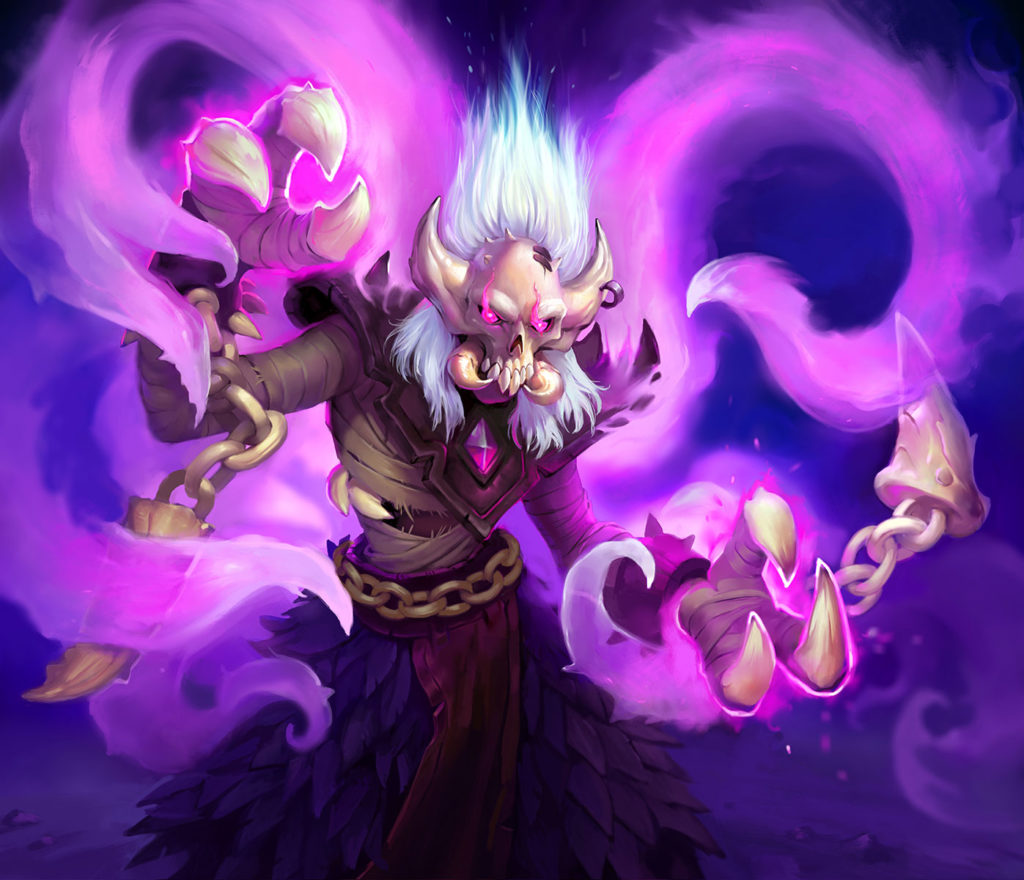