Way back when, in the infinitely more innocent times of 2015, Reno Jackson’s arrival reinvented the wheel in terms of Hearthstone deckbuilding: it was the game’s first “highlander” payoff card, rewarding you for building a deck with no duplicates at all. It was a popular concept and remained supported across the years since, with very different approaches taken over the various expansions. With Zephrys the Great and Dragonqueen Alexstrasza currently offering a powerful toolkit to all ten classes for such an archetype, it’s worth comparing how they stack up with previous decks of the same ilk to decide whether they’re healthy for the game in their current state, and what can be done to support this sort of a deckbuilding restriction in a different fashion going forward.

Reno and His Heroes 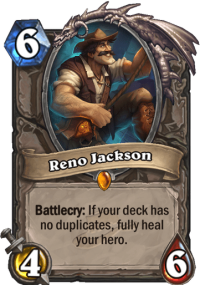 Cast your mind back to The League of Explorers, Hearthstone’s sixth expansion (and third adventure). Released on extremely short notice, it was a set with a plethora of ladder-worthy cards and interesting new concepts. Discover has remained a staple ever since, but the other enduring innovation of the set was the introduction of the “highlander” concept from Magic: The Gathering, a card which provides a powerful bonus if you’re willing to sacrifice overall consistency by building a deck of singleton cards.

Reno Jackson’s Battlecry effect was – and is – still incredible considering the normal gameplay limitations of Hearthstone. Though the developers have been constantly pushing the envelope in terms of what a single card can do – for good or bad, that’s certainly a matter of discussion –, we haven’t really seen anything like the original incarnation of everyone’s favorite dashing adventurer ever since. It’s a game-changing effect in the mid-game, yet one which doesn’t offer a universal payoff across all archetypes. Healing back to full health is a lot less impactful in the mirror or a control matchup, therefore the sacrifice of giving up all your duplicates had to be a lot more carefully considered in the deckbuilding stage as it is nowadays.

Of course, Reno wasn’t alone for long. A year later, the tri-class cards joined the fun in Mean Streets of Gadgetzan: Mage, Warlock and Priest became the gatekeepers of Highlander decks for the foreseeable future thanks to their exclusive payoff cards. The singleton synergy cards from this set marked a not-so-subtle shift by offering a much higher tempo payoff. Though Kazakus was the star of the show (and the ability to generate a 1-, a 5- and a 10-mana spell, often coupled with Brann Bronzebeard in slower matchups, was comparable to Zephrys the Great in many ways), but even the duds of MSoG exhibit similar symptoms.

Krul the Unshackled belongs to a “the one she tells you not to worry about” meme alongside Dragonqueen Alexstrasza, and it takes no more than a cursory glance to figure out why the latter is so much better, or indeed, why the Demon never saw serious play in Constructed. Similarly, even though Inkmaster Solia was never a core inclusion in Highlander Mage decks (a 0-mana 5/5 just wasn’t a big enough payoff and you didn’t have as many strong expensive spells as you do today), Dragoncaster shows how strong the effect itself could be in the right circumstances.

You may not even recall the standard application of Raza the Chained’s effect, which was originally just a source of constant 0-mana heals. It’s easy to spot why the Battlecry was eventually nerfed: the tyrannical reign of “Razakus Priest”, an archetype combining Raza and Shadowreaper Anduin to create a machine gun that was impossible to outlast, was one of the most frustrating top decks in the history of the game, and Team 5 decided it can’t be allowed into Wild without a significant nerf. (Notably, Mind Blast and Prophet Velen were also key parts of that deck.) Once again, a higher tempo payoff than Reno Jackson used to be.

From this point onwards, Highlander decks went on a long hiatus in Standard. Saviors of UIdum was the set which brought along the triumphant return of the League of Explorers, bringing four class-specific payoff cards to the table alongside Zephrys the Great, a cards strong enough to enable singleton builds even outside the four “good” classes of the year-long storyline – or in certain cases, builds which didn’t even give up on duplicates at all.

The real surprise came in the final expansion of the year in the form of Dragonqueen Alexstrasza, a massive late-game bomb and the sort of tool which was never before available to this kind of decks. Looking back at MSoG, you can also identify a different issue with the card: back then, Reno Jackson only coexisted with Kazakus and co. for a single set’s worth of time in Standard, while now the two neutral Highlander payoff cards will be alongside each other for a whole more year (alongside the four class-specific ones). Couple this with the fact that they have much higher and more consistent board impact than their past counterparts, and you can see why people are getting concerned about the current “Reno decks” in the game.

Are We Going to Be Rich Though? The obvious downside of the Highlander gameplay experience on either side of the board is that they can be extremely draw-dependent. Part of this can be mitigated with good deckbuilding skills but there’s not much you can do about the high-tempo payoff cards as a player. In general, the issues with Hearthstone’s current Highlander cards in Standard have a lot to do with how the game in general has changed across the years: with ever-increasing initiative bundled into individual cards (just consider as an example how Rush has superseded removal spells for many archetypes) and very consistent card draw options, it’s become surprisingly easy to create a non-Highlander Highlander deck which still has duplicates but can nevertheless rely on these big payoff tools in the mid-game.

Though that is an interesting deckbuilding consideration – and it would be a shame to see it removed by a card text change –, the prevalence of strong card draw has made it way too easy to pull this off with certain classes. The ability to generate Dragonqueen Alexstrasza in non-Highlander decks via Discover effects is also a problem, especially because it’s the exact opposite of the Reno Jackson effect: it only comes into play in long games by the time you’ve exhausted your duplicates, and your opponent genuinely has no chance of preparing for the surprise. The range of potential outcomes is simply too wide both in terms of tempo and value (especially once you consider the Dragons that get bonus effects from holding another one, which simply wasn’t a thing when that “keyword” was originally introduced in Blackrock Mountain), and no matter the game state, one of the players will be disappointed when it hits the board.

Meanwhile, Zephrys the Great is as big a coding challenge as it’s a balance one. Ever since the Priest class rework, the djinn seems to have gotten drunk on Kool-Aid, offering surprisingly useless cards in many gameplay scenarios. Having a single universal strong payoff as your reward for running a deck of singletons was just fine in the past, and though the card compares favorably to Kazakus in many ways, it was good enough to enable certain Highlander builds by itself, even in classes which didn’t receive additional support in the form of a League of Explorers member. However, it can be a little too much when coupled with potentially two other high-tempo rewards for the singleton build.

In a recent interview with a Chinese card game site, Iksar has suggested they may step in to adjust the power level of the Highlander payoff cards if they continue to be as prevalent as they are today. (Update: Nerf to Dragonqueen Alexstrasza was already announced.) Realistically, this would have to come in the form of a cost increase for both of these cards. It’s a viable short-term solution for the rest of this Standard year. In the long run, however, it feels like singleton decks require very different payoff tools if you want to promote a healthy gameplay experience, one with lesser impact on tempo compared to what we’ve seen as of late. That said, Hearthstone as a game is in many ways unrecognizable from the MSoG days due to a fairly pronounced power creep. If Highlander decks were to return again in a few years’ time, it’s quite likely the game will change enough again to the point where these considerations may no longer apply the way they would today. In general, though, an overall return of more predictable resource generation and less initiative on individual cards would be welcomed by many, and by the same token, “Reno decks” would also benefit from being more “Reno-y” in the future.