The cat is out of the bag – in Hearthstone’s newest expansion “Rastakhan’s Rumble”, we’re going to participate in a nine-way troll brawl to entertain the King of Zandalar! Wide-ranging speculations went around, but as we have stated in our prediction article last week, a troll-themed expansion seemed like a very possible scenario.

From a lore standpoint, the expansion announcement at Blizzcon is a dream come true; the trolls, being one of the most ancient races of all Azeroth, share a rich background in the World of Warcraft. In addition to that, WoW’s latest expansion, Battle for Azeroth, revisit the past of the trolls, the Zandalari in particular, and that may have been the main reason for Team 5 to pick up this nothing less but fantastic fantasy for the last expansion of 2018.

But where do the Trolls come from? What role do they play in Warcraft and Rastakhan’s Rumble? And who exactly is Rastakhan?

First things first: The new expansion is named after King Rastakhan, the God King and Great Leader of the Zandalari Empire. Wait, you haven’t heard of Rastakhan before?

Well, that’s not unusual. In World of Warcraft, the Zandalari tribe just now began to play a starring role in the Battle for Azeroth. The Horde and its adventurers (as we players are called in the lore), are trying to get ahead of Anduin Wrynn and the Alliance, seek out King Rastakhan in Zuldazar, the Golden City and capital of the Zandalari Empire. More precisely, the Horde looks to add Zandalar’s naval fleet, the biggest in all of Azeroth, to their army.

The plea of the Horde comes in handy, because in return Rastakhan and his people looked for ways to protect the lands against all sorts of threats. A win-win situation for everyone involved! But Rastakhan’s followers as well as the majority of the Zanchuli Council, the main advisers of the King himself, tried to plot against the plans of Rastakhan and his loyal daughter Talanji.

The result of what we today would call a coup d’etat is the death of King Rastakhan, initiated by one of his closest advisers, Prophet Zul. He planned to recreate the ancient troll empire in its old strength, and with the help of mystical mogu magic, he wanted to revive Dazar, the First King of Zandalar, so that he can reign once again.

In a fortunate turn of events and thanks to the efforts of the mighty adventurers and Bwonsamdi, Loa of Death, King Rastakhan gets revived to take back the throne and seek deadly revenge against Zul. 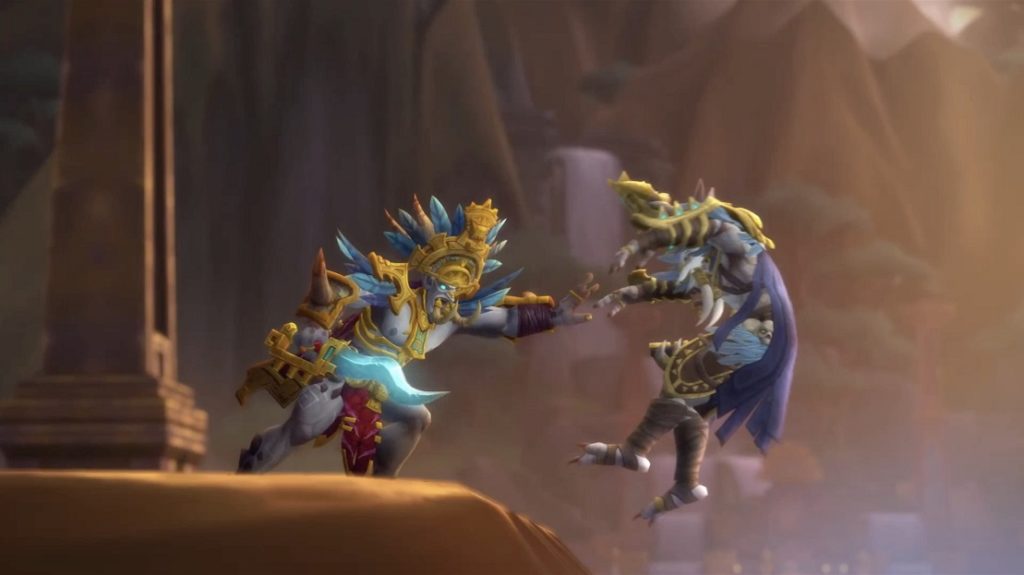 Needless to say, this is not the end to the story. It turns out that Zul struck a deal with the Old Gods to return as the Dark Prophet Zul, still trying to fulfill his dream of the purest of troll empires. That leads the story of Battle for Azeroth and its adventurers into Uldir, the first raid of the expansion, where they have to fight Zul and the Blood God G’huun that tries to consume the Zandalari empire and replace the Loa, the gods of trolls.

Long story short, King Rastakhan is a tragic figure in Warcraft lore: Being the undisputed Zandalari ruler for over 200 years, he can’t fathom the spreading corruption around him, and only thanks to his sharp-witted daughter Talanji, he is able to turn around his deadly fate.

Seeing Rastakhan just now play a starring role in the Warcraft universe, one question instantly comes to mind: Why would all troll tribes gather for a, no pun intended, Royal Rumble in the upcoming Hearthstone expansion?

To answer that question, we have to travel back in time. Sixteen thousand years ago, the first trolls, created within the Well of Eternity, went out to explore Kalimdor, the main continent of Azeroth. They first settled on a mountain range which is now the island of Zandalar.

The Zandalari trolls then were the first trolls which every single tribe descended from. As time went by, lower caste Zandalari trolls left the high culture and formed different troll tribes all over Kalimdor: 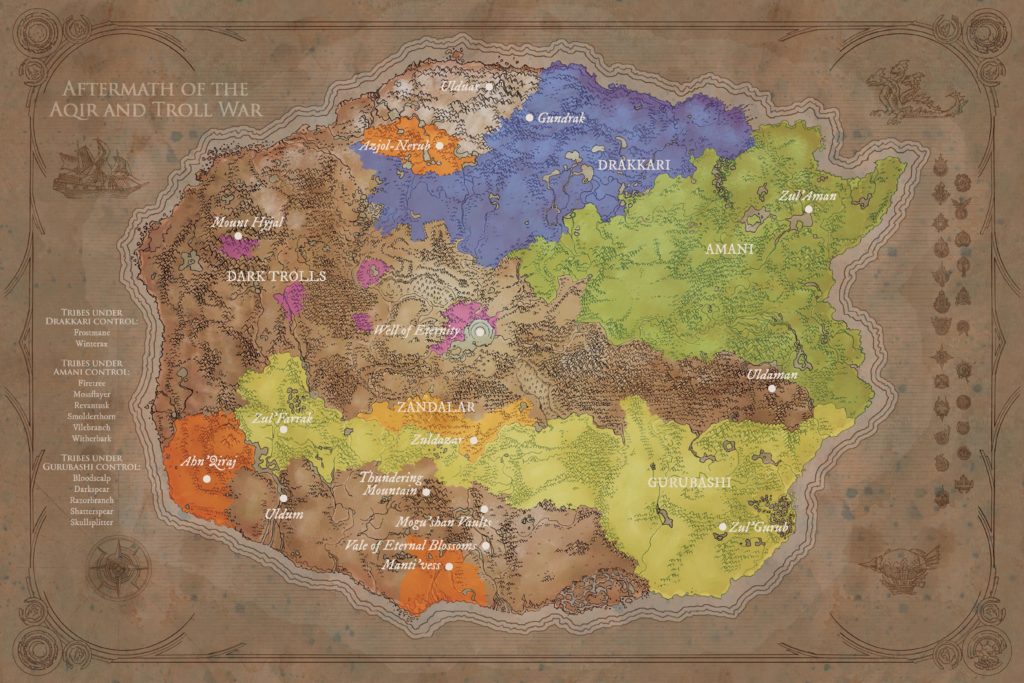 The Gurubashi and Amani, mostly known as jungle trolls, occupied the eastern jungles of Kalimdor, while the Drakkari, also called ice trolls, explored the cold north. The western subterranean areas were inhabited by the dark trolls. That group of trolls started worshiping Elune, the moon goddess, and thanks to the enormous power of the Well of Eternity, they later evolved into the first night elves.

Now back to Hearthstone! As we can see, Rastakhan’s Rumble looks to be a tournament to honor the true king of all trolls, and every notable troll tribe looks to send out a team. Nine teams in total will try to fight for the favor of God King Rastakhan, one for each class, and every team is featured by a particular loa.

The word “loa” has been brought up countless times during the last few days. In fact, the term loa is derived from the real world. It describes powerful spirits of the Voodoo religion.

In troll culture, loa are the entities that trolls have been worshiping for thousands of years. Some of them are animals or creatures, while others remained shapeless or ghosts.

As it is in most multi-theistic religions, each loa stands for a particular attribute. Many thought that loa and Wild God meant the same, which is wrong. Wild Gods are an important part of the group of loa, and some troll tribes worship deities known to other cultures as well such as Elune or Aviana.

After we have taken a good look at the trolls and their role in the Warcraft universe, we now know why Blizzard decided to develop a whole expansion around their ancient history.

The fact that Hearthstone explicitly picked up current World of Warcraft events of Battle for Azeroth shows the passion surrounding the lore and fantasy behind Rastakhan’s Rumble. The Zandalari storyline has been a fan favorite, and it could turn into the perfect Hearthstone expansion as well.

After all, Hearthstone is about rumbling and brawling, which will hopefully be showcased to perfection by Rastakhan’s Rumble. Another overlap between troll culture and card game philosophy are archetypes. 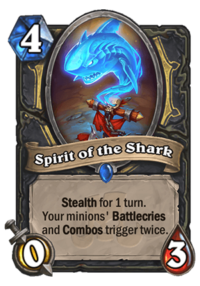 The foundation of different tribes and worshiping of over 30 different loa sets a perfect stage for different deck archetypes. As a player, you can choose your favorite fantasy: May it be the blood-sucking cult of Hi’reek, a perfect fit for every Warlock, or the circle of Krag’wa which shares the Shaman philosophy of controlling the elements.

And even better: You can take your favorite single-player experience to competitive play! The loa spirits will be playable cards in Standard and Wild decks, and as Spirit of the Shark, the first revealed spirit card, points out, you can show your affiliation to your favorite loa every single game!

In the end, the community’s reception seems largely positive when it comes to the theme of Rastakhan’s Rumble. This will be a great fundament for deeply diving into the depths of troll culture and Warcraft lore as a whole, and while a Hearthstone expansion can’t live without a certain amount of craziness, it is already crystal-clear that Team 5 hit all the right notes to make the tenth expansion of Hearthstone a worthy representation of the troll race and its beautiful history.