Here’s our The Curator Boss Guide & Information for the Hearthstone Adventure, One Night in Karazhan. We’ll be listing The Curator’s deck, special cards, winning deck lists, and card rewards for defeating the boss!

The Curator is the first boss of The Menagerie wing in One Night in Karazhan. The Curator has malfunctioned and is letting beasts, demons, and murlocs go free, you need to stop him before The Menagerie is overrun!

Defeating The Curator will unlock these cards: Zoobot, Menagerie Warden 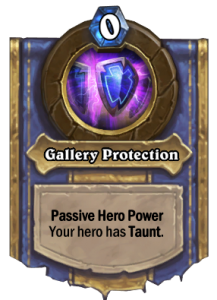 The Curator has Taunt and requires you to output some damage quite quickly to defeat him. You also need to get a bit lucky with how he rolls the various summon cards he plays, as long as he doesn’t get anything too crazy, a deck like Aggro Shaman can supply enough damage to finish The Curator before he has time to mount enough of a board. Spells can still be used to take down his minions so if there’s something particularly troubling on the board don’t hesitate to remove it to preserve your minions.