Thanks to Crumblethief for allowing us to re-host their Legendary Reno Dragon Priest deck (Proof of Legend). I’ve added Crumblethief’s guide below!

So first let me tell something about the deck and what it is designed to do. This deck is inherently a very minion heavy deck with not too many spells and generally wins by creating board pressure to an extent that the opponent is unable to deal with your minions. In this guide I will give some insight in the different matchups that are in the meta right now and explain how to approach the matchup. Upfront I want to tell you that I am in no means an expert and could have a completely wrong approach. I am always trying to learn, so if you think you have some (constructed) feedback on something, feel free to call me out.

Before I get to the matchups in general I want to take some time to talk about this deck in general and what it’s strengths and weaknesses are against the different types of deck. In short I will discuss Control, Combo/Burst and Aggro matchups. I will talk a lot of value and value trades, this is essentially when your opponent has to invest 2 or more cards into killing your minion, which is only 1 card, thus creating value by him having to play more cards to deal with all of yours. Since there is the same amount of cards in every deck (Noo Prince Malchezaar, you are not welcome in the meta) and trading 2 for 1, you create a card advantage that way. When you are dictating the pace of the game the potential in making value trades goes way up, that is why in almost every case you want to be the first on board. 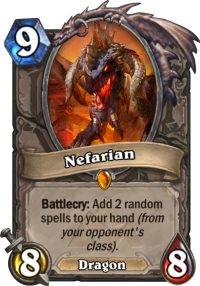 This deck thrives in the control matchups. Dragons are generally very strong minions with a lot of health and not easily removed. With the threat of healing them back up after trading with another minion they have the potential to easily trade 2 for 1 or even 3 for 1. Since other control decks (like warrior) tend to run less minions and a lot of removal to stand a chance in Aggro matchups, the amount of minions in this deck is just too much for them to handle. There is just not enough removal to keep the board clear and your minions threaten their life total by getting multiple hits in. Also the sheer amount of value that certain cards like Thoughtsteal, Ysera/Nefarian can create just makes this deck very good in the control matchups.

Your approach in these matchups should not be set in stone though. This is something very important that I must tell you, I can write a guide with tips and general information, but I can not teach you how to play in every situation. No hearthstone game is the same, you/your opponent will always have a different draw and this could change your entire win condition. I could for example say if you play a Control Warrior your approach should be X. However it should be if X or Y (or Z) than my approach A should give me the highest chance of winning this. For example, this deck can easily take Control Warrior to Fatigue, but if you identify that you have a lot of high cost minions in your hand you could just start slamming them down and forcing the warrior to have answers for all of them. In these particular matchups make sure you keep track of their removal and if they use an execute on your 4/8 twilight drake, that could potentially make Ysera stick later in the game. In sum, identify your hand, what can your hand do vs their cards, can I be proactive or should I try and be more reactive, since I have a lot of removal. 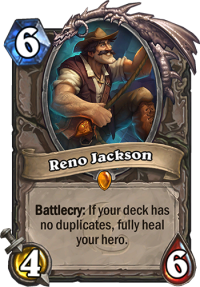 Aggro matchups are hard for this deck, but definitely not unwinnable. Important is to make sure you keep some early game action in your opening hand to fight for the board early. Against Hunters and Mages I tend to always keep Reno Jackson as well. Hunters and Mages mostly win by damage through spells combined with some minion hits. So when slamming Reno you will most of the times not stare down a full board to nullify your 29 heal that turn (looking at you, Midrange Shaman players… Freaking Bloodlust). Identify the minions with the highest threat and try and remove them. Always make sure to look for value trades and identify if you can allow yourself to go for that line of play.

DO NOT hold back in these matchups, just slam everything on the board and fight for it hard. When you have control over the board and you can dictate the trades, your priest hero power comes in to heal your minions to deal with new enemy minions or heal your face to keep you out of lethal range.

By far the most difficult matchup since Priest can not go above 30 health and a lot of burst decks can easily do 26 or even more damage (Freeze Mage). However this deck is not completely at the mercy of these decks. In this matchups you want to keep pressuring your opponent with your minions and make sure they have to remove them in order to prevent themselves from dying. So just be as aggressive as possible and slam down your minions, play around AoE when healing up minions when possible. When to use Reno is very hard to tell me in this guide. Just make sure to keep track of their burn and identify their max damage. If you are below that threshold and your opponent just drew a bunch of cards and just slammed an Emperor Thaurissan it might be a good time. This is for you to identify though, so use that brain of yours!

Since a lot of decks are built to do the same thing, the mulligan and how to approach the matchup is practically identical and I will put some decks in the same corner. Since I talked a bit about the approach above, I am not going in detail for every matchup. Identify what kind of deck it is, and read what I said above to get a feel an idea of what kind of approach you should use. Slamming down minions is almost always the way to go, so it’s not that diverse anyway.

You can choose to keep 4 drops if you have a turn 2 play in your opening mulligan, that way you can coin 4 drop on turn 3 and follow with a 4 drop on turn 4. Important to add is that if you find a Wyrmrest Agent or a Blackwing Technician to keep a drake in the mulligan if possible. Do not keep the drake when it is a high (bigger than 6) mana cost one though, else it will be a dead card for too long. You really have to make every card count in this matchup to win, so being stuck with a Deathwing for 10 turns does not do you any good.

The minions of the shaman and warlock are very scary because of the potential of making value trades through buffing with Flametongue Totem and Thunder Bluff Valiant or Defender of Argus and Dire Wolf Alpha. So you generally want to make sure the board is clear. You are almost in all cases making trades to keep the board in check. Try and save your Shadow Word: Pain and Book Wyrm for Thunder Bluff if possible, but do not hesitate on using it on a Totem Golem to get back the board. You only have 2 AoE spells, so use them wisely. You might want to bait a Hex out before playing Chillmaw to make sure a board clear.

Faerie Dragon, Blackwing Technician, Twilight Drake, Priest of the Feast, Shadow Word: Death. In your mulligan keep in mind that you want to pressure as hard as possible. So try and curve out well. Slam down minions that trade well with their early drops.

You do not want to give the time to assemble their combo pieces. So pressure them by playing minions and fight for the board. They do not have the best removal, so high health minions are very hard for them to deal with. Watch out for Equality Consec vs. Paladins though, do not overextend too much.

Make sure to get on the board and fight for control. Make sure to heal your minions to stay out of removal ranges of Frostbolt, Quick Shot, Fireball etc. if possible. Keep track of their burst and try and Reno as late as possible. Identify their max damage a turn and evaluate if you can hold Reno for another turn. Proceed to slam down Reno and watch them concede.

Try and get control over the board so you can make favorable trades and make your opponent lose value by trading 2 for 1. Be wary of drawing cards because of fatigue. Since this deck is not that draw heavy you should be fine though. Do not overextend into Brawl and make sure to Entomb high priority targets like Sylvanas Windrunner or Ysera. Use your Death for things like Grommash Hellscream or Baron Geddon.

That is it guys, I did not go that deep in every particular matchup because I feel like I explained a lot of approaches in the first section. Just identify against which type of deck your playing (control, combo/burst or aggro) and adjust your approach accordingly. Like I said before, everything you read is up for debate and I would like to discuss stuff. Feel free to comment and I will try and respond to your ideas!