Thanks to Carrottopguyy for allowing us to re-host his deck! Check him out on Twitter!

Hey everyone, I’m carrottopguyy, and my battlenet name is dwarfsanwich. I recently hit top 100 legend for the first time playing my Deathrattle Rogue deck using cards from the new expansion. A little about me: I play almost exclusively Rogue as it is my favorite class, and unlike most I favor Tempo / Aggro Rogue decks over Miracle Rogue. I have just recently started attempting to play higher legend, though I’ve been watching high level streamers and following the meta for a while now.

I play all my games on iPad, so instead of using deck tracker I decided to keep track of all my games with pen and paper. There are a few mistakes early on and some of the names might be misspelled. I played 58 games from rank 675 to 61 winning 39. I’ve included a google docs with all the games I recorded. I realize this is a small sample size, and it’s probably skewed by the first day testing meta, so I will play more games and try to get a more sizeable amount of data but it will take some time.

So, on to the deck. It’s an aggressive midrange deck that seeks to control the board early and then win off of blow out turns with Edwin VanCleef or Twilight Summoner combos. It’s similar to Zoo in some ways with less token synergies, but much better recovery. For early board control you play Runic Egg, Argent Squire, Abusive Sergeant, Swashburglar, Backstab, and SI:7 Agent. You can also use a Cold Blood or Eviscerate in a pinch. Rogue’s dagger is also a strong early game board control tool and it helps this deck win the board early a lot more consistently. Sometimes you can play the role of the aggressor early, too, if you can set up Argent Squire + Cold Blood or an early Edwin combo, which leads to quick wins in some matchups.

The decks strongest combos involve Shadowcaster and Unearthed Raptor. A turn 4 Twilight Summoner into an Unearthed Raptor + another card or Shadowcaster puts you really far ahead, essentially netting you a 5/5 for 1 mana. That’s almost as strong and the Menagerie Warden combo but it comes down 1 turn earlier. And even if they kill the Twilight Summoner, they probably hero powered to do it, which made the card a 4 mana 5/5 which ate two of your opponent’s mana, which is already insane. The other combo is to use Shadowcaster to play a 1 mana Edwin. You can often play a 3 mana 4/4 or 6/6 Ewdin and then Shadowcaster it for even more value down the line. 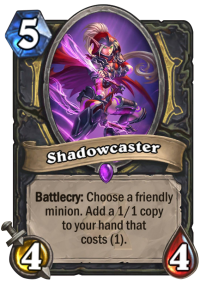 A little more about Shadowcaster; the card is amazing in this deck, it has really high utility. Runic Egg and Swashburglar have done a ton for this card, as they essentially let you combo for 1 mana and turn the effect into draw a card like Azure Drake. Copying Defender of Argus allows you to repeatedly loop Taunts to keep you out of range against Aggro Shaman or other aggressive decks, and get crazy trades. You can copy Azure Drakes for cheap spell damage and card draw, and you can copy Unearthed Raptors for cheap combos with Twilight Summoner down the line.

A few tips: always think a few turns ahead with this deck about what you are setting up. For example, against Ramp Druids, I almost never play my 1 drops turn 1, I always save them to combo with SI:7 Agent or Edwin since Ramp Druids will usually hero power anyways and the low attack / health values on the decks minions make them extra weak. The one exception is Argent Squire going first, since they would have to coin to take the shield off.

I will keep playing the deck and thinking of improvements. I’ll appreciate any questions, criticisms, or suggestions for the deck.