The Aggro Water Rogue deck list that includes Finja, the Flying Star has grown heavily in popularity recently. Our Aggro Rogue guide will help you pilot this new deck by teaching you mulligans, strategy, and general tips on how to succeed!

In a popular game like Hearthstone, most of the time the meta gets “solved” really quickly. A month after the expansion we already know which decks are the best and we can safely assume what we will play against for the next 3 months or so. But surprises happen. Every expansion has some “sleeper” cards which power gets discovered pretty late into the expansion.

When it comes to Mean Streets of Gadgetzan, Finja, the Flying Star is that sleeper card. It wasn’t really rated highly (in any deck besides Anyfin Paladin), because no one expected to see a lot of Murlocs in the meta. However, after a lot of experimenting, it turned out that Finja is strong enough to put other Murlocs into the deck, even though you normally wouldn’t play them. And so, besides the standard “Pirate” package that tons of the decks have been running, more and more lists have started including “Finja” or “Murloc” package. Decks that have used both are known as “Water” decks (probably because both Pirates and Murlocs are water-themed, don’t ask me). Probably the most successful of those decks is Aggro “Water” Rogue that has been gaining quite a lot of popularity lately.

The deck looks odd, when I first looked at it I thought that it can’t possibly win games. But I was wrong. It can win the games, and more than that – if you learn how to play it properly it’s one of the best decks in the current meta.

The list I’m using for the guide was created by Freakeh, based on the original list by Dwayna. However, since the decks are still pretty fresh, people are experimenting with tons of different builds. I’m going to write about the more tested and “stable” one, because new ones are probably developed as you read this (I know that Dwayna is constantly testing new stuff on his streams). If the build changes heavily, I will update this guide. 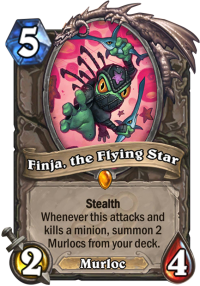 Even though it’s an Aggro deck, it’s really tricky to play as compared to the other Aggro decks. It’s not a classic “face rush” deck where your main goal is to kill your opponent as fast as possible. The deck has quite low early game tempo, besides some rare cases you can’t really drop the enemy down to 10 health on turn 4. The deck’s main strength are big tempo swings on certain turns. Combo cards are generally weak if you play them without combo, but they can be incredibly powerful in certain cases. Same goes for Finja – a turn after playing Finja is an insane swing. You can turn the whole game around with just that one card. Other “tempo swings” include a big Edwin VanCleef or Dark Iron Skulker.

The deck is slower, which means that it doesn’t run out of steam that quickly. You have multiple cards generating extra value – 2x Swashburglar, Shaku, the Collector and The Curator. Sometimes you can afford to play a slower game and still win with the right tempo swing. I had games vs Dragon Priest which I took past turn 10 and still won after getting the Finja value.

Your strategy against other Aggro decks is rather simple. First of all, you try to answer everything they play. Don’t try to engage in a face rush (unless you have extremely aggressive hand with let’s say 2x Cold Blood) because most of the time you’re going to lose. You have multiple tools to kill opponent’s minions without taking damage yourself – Backstab, Eviscerate, Charge minions (Deckhand, Bluegill Warrior, Argent Horserider). You want to utilize them if possible. Your Hero Power is also great in those matchups. Even though you take extra damage, with one activation you can often take two small minions. Taking some damage early to establish the board control is fine. But later, if you can, try to not use your face to tank more damage.

At one point, you want to make a tempo swing and start being the aggressor yourself. It really depends on the game. It can happen when your opponent had a slower turn (e.g. he didn’t develop any minions) while you have some board presence, after a big Edwin or especially after the Finja turn. With your usual post-Finja board you can usually threaten 2 turns lethal, so you want to do exactly that – put your opponent on the clock. You generally want to keep your Cold Bloods for those tempo swings – you want to put your opponent in an awkward spot. Using it early to go face will just make him trade his minion and get 2 for 1. But if you use your Cold Blood when you have board control already, he will often have to a) face tank it with his weapon b) use some burn spell to kill it or c) he won’t even have a way to deal with it.

Try to make your “tempo swing” as fast as possible. If your opponent gets a, for example, slow turn 4, try to get advantage and develop as much stuff as possible. You should win the late game against Aggro, but the problem is getting there. This deck is amazing at pushing an advantage, so once you get even a slight opening, try to use it.

In games vs Control, you’re the aggressor 100% of time. But it doesn’t mean that you have to hurry up. Against Control, you might take a slightly slower game and still win. Games vs Aggro are pretty straightforward, but those vs Control can be incredibly difficult. Most important thing is resource management. Most of the Aggro decks run tons of burn damage/weapons that make killing opponent after early aggression much easier. In case of this deck, it’s a little bit harder. It’s much more board-centric than other Aggro decks, you really need your board to deal the damage. So you want to use your minions as efficiently as possible and try to protect them. 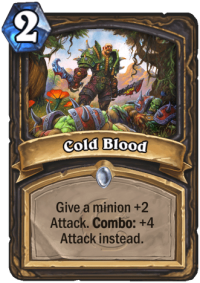 First of all, let’s forget about “taking it slow” for a bit. There are some matches, some opening hands where you really want to rush things down. One of those cases is getting an early Argent Squire + Cold Blood. It’s an amazing combination, because it allows you to start pushing some serious damage as soon as turn 2. And before your opponent will deal with the Squire, it’s pretty likely that you will have more minions to attack with. If you get a really aggressive opening hand, you can try to push it and win the game fast. If that’s the case, you can go for the highest tempo moves – e.g. dropping turn 4 Naga Corsair without a weapon equipped at all, just for the 5/4 body. However, don’t try to go for this plan with a slower hand, because most of the time it will fail. Slower decks are well-equipped to fight against the early aggression and if you’re not aggressive enough, they will first stabilize and then win, because you were using your cards inefficiently to get the highest early tempo.

So, let’s assume that you’re not going for the face rush plan (if you do, there is not much more I can really tell you – just hit face and pray that your opponent won’t have the right answers). Overall, taking face damage is not a problem when playing this deck. Until you’re really low, you can easily swing your dagger at minions. That is going to help you with building a tempo advantage, 2 pings per 2 mana is quite nice for the Hero Power if you don’t count the extra damage. 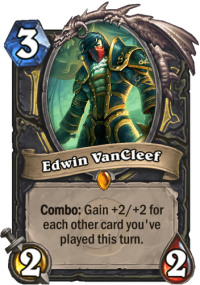 The “big tempo swings” are even more important against Control. You want to try to put your opponent in an awkward situation if possible. For example, if you put a Cold Blood on a small minion and play a big Edwin VanCleef on the same turn. Those actions alone might have been countered quite easily, but when combined, your opponent might not have a way to both clear a buffed minion and big VanCleef. If he can’t, now you have an amazing tempo advantage – you can develop next minion and once again he won’t likely be able to clear both. This way you push for some serious damage each turn while your opponent tries to deal with whatever you play.

One of the absolutely best cards against Control is, obviously, Finja, the Flying Star. While it makes the turn you play it really slow, you get everything back next turn. I just love pulling out 2x Murloc Warleader, because it gives you most stats on the board. And that’s amazing about Finja turns is that you also have full mana to develop more. If your Finja survives, you pull out 2 Murlocs, you play the 3rd one, drop the Cold Blood on something and play let’s say SI:7, now you have a huge board and your opponent needs a big AoE or he loses. You really want to put him in those difficult situations. Removing everything one by one is not an option, because there is just too much. He either plays something like Flamestrike or Twisting Nether or he loses. 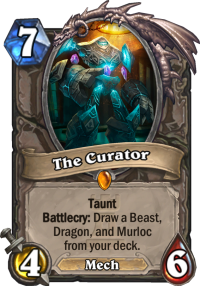 Of course, you try to play around the AoEs a bit. Knowing exactly what kind of AoEs are available to your opponents each turn is important. So if you already have 3 minions on the board on turn 6, against Mage, you don’t play another one to not play into Flamestrike. Or you can play one, if it’s let’s say Argent Horserider, The Curator or big Edwin that will survive AoE.

When you have The Curator in your hand, you try to play it as fast as possible. Drop him right away on turn 7 if you can. The longer you wait, the higher the chance is that you will draw all the cards you can pull out from him. With only 1 Beast and 2 Dragons, it’s quite likely that you do, so the earlier you play it, the more value you guarantee. The Curator is one of the ways to keep up with the slower decks. Around turn 7 you should be completely out of steam, and Curator can give you plays for 2 or 3 more turns. It can also potentially give you Finja if you didn’t draw it already.

So, the strategy against Control is to either rush them down (rarely works) or wait for a big tempo swing turn and then try to finish the game in 2-3 turns by having more tempo than they can handle.

The list is pretty expensive for an Aggro deck. It runs multiple Legendaries and honestly, most of them are pretty crucial to the deck. I will list all the non-adventure Legendaries and give you possible replacements:

I would like to remind you, however, that Legendaries are pretty important in most of the decks and replacing them might reduce the given deck’s quality/performance significantly.