Our budget Tempo Demon Hunter deck list & guide for the Ashes of Outland expansion will teach you how to play this budget list. This guide includes Mulligans, Gameplay Strategy, Card Substitutions, and Combos/Synergies! 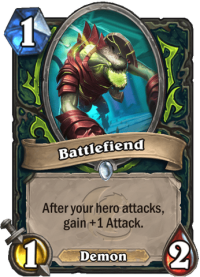 Demon Hunter is the new class added in Ashes of Outland expansion, and it has quickly wrapped the entire meta around itself. While it was already nerfed, even after four of its cards got changed, it’s still arguably the most powerful deck in the game right now. And luckily for budget players, it’s also an amazing class to build for cheap. Its Basic & Initiate sets were given out for free, and many of the Common & Rare Ashes of Outland cards are very powerful.

Tempo Demon Hunter is an aggressive, heavily synergistic deck. Most importantly, the deck synergizes with Attacks your Hero makes – cards like Battlefiend or Glaivebound Adept get significant bonuses when your Hero attacks. The deck also ha some powerful Outcast cards, with Altruis the Outcast to make an even better use of them.

Ultimately, the budget deck is pretty close to the full-fledged build, which means that it’s probably the best budget deck available in the game right now. Since it’s only a few cards away from a Tier 1 meta deck, it’s almost a no-brainer for someone who looks for a competitive and easily upgradeable deck.

At the core, Tempo Demon Hunter is a very simple and straightforward deck. You want to stay on the board, keep putting pressure on your opponent with minions and Hero attacks, and then finish the game with a combination of minion damage and effects like Glaivebound Adept and Priestess of Fury. And if you get a perfect curve, it’s usually very easy, but compared to many other aggressive decks, Tempo Demon Hunter is much harder to play optimally. 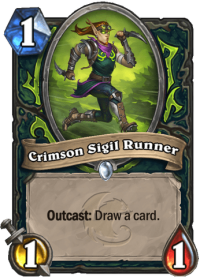 First and most importantly, it’s the first time in Heartshtone that hand management is really important. And I’m not talking about size, but rather position of the cards. Even starting with mulligan – Crimson Sigil Runner kept on the left is much stronger than a Crimson Sigil Runner kept on the right. Keep your hand positioning in mind at all times, try to plan ahead. For example, if Skull of Gul'dan is the second card from the left and it’s Turn 5, you might want to play the left-most card in order to activate its Outcast effect for next turn EVEN if playing the left-most card this turn is not the most optimal play. You’re making this turn slightly weaker in order to make your next turn much stronger – Skull without Outcast is really bad, but getting those Discounts makes it a very powerful card.

The main downside of a budget version compared to the regular one is lack of burn / finishers. Once your opponent Taunts up, you will have a much harder time going through. Regular builds play Kayn Sunfury and Metamorphosis, both of which allow you to go over the Taunts and finish the game even if your opponent somewhat stabilizes. That’s why you need to play even more aggressively than you usually would. You can’t let the game go for too long. You don’t have to play around AoE board clears that much, since you have multiple ways to refill the hand, so you won’t likely run out of cards at any time. 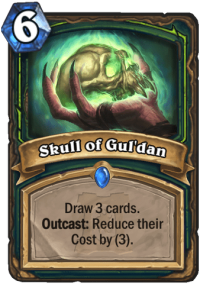 While you have a lot of ways to draw cards (Spectral Sight, Skull of Gul'dan), ideally you want to wait with casting them until you actually need to. Focus on developing a better board first, on putting pressure, and THEN if you’re running out of stuff to play, draw cards. This way you will force your opponent to play inefficiently, trying to answer things you do instead of doing what they want to do. Giving them a breather by not doing anything other than drawing, or drawing and only playing a single small minion, can really bite you back.

And here’s a couple of quick tips that should make you better at playing this deck. Raging Felscreamer‘s Battlecry effect persists after you end your turn, so one of the best ways to use it is to play it on T4 and then drop Priestess of Fury on T5. You can also drop Sightless Watcher immediately on curve, which is a higher tempo play. When you pick a card for Sightless watcher, prioritize Outcast cards. Since you draw it next turn, you will be able to play it with an Outcast bonus right away. It’s good to keep one charge of Umberwing or Twin Slice (or Second Slice) if you need to activate “on attack” synergy like Furious Felfin or Glaivebound Adept, but you don’t have any extra mana to Hero Power. After you play Twin Slice, Second slice always lands on the right side of your hand, which is very relevant when you have Altruis the Outcast on the board. Altruis also has a great synergy with Skull of Gul’dan – you should be able to play multiple discounted cards on the same turn as him.

Like I’ve mentioned a few times already, the deck is pretty close to a full build. You only need a few more expensive cards to turn it into a Tier 1 meta deck:

And here are your flex cards that you can take out in order to run the ones listed above (try to sort of match them mana-wise to not mess up your curve):