Our Aggro Rogue deck list guide for the Scholomance Academy expansion features one of the top lists for this archetype. This Rogue guide includes Mulligan Strategy, Gameplay Tips, Card Substitutions, and Combos/Synergies! 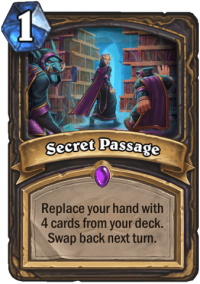 Aggressive Rogue decks should be familiar to anyone who’s played Hearthstone for a decently long period of time, as the class’ incredible tempo and burn tools seem to rise to the top of the metagame over and over again. Though it was a Galakrond-flavored build which dominated the class for the most recent period, the introduction of cards like Secret Passage, Vulpera Toxinblade and Self-Sharpening Sword provided the archetype with enough additional burn and reload to propel it to the top ranks of the metagame. Not only that, but cards like Steeldancer and Jandice Barov also serve as a great way to pump out an unfair number of stats onto the board, aiding your push to bring down the opponent’s health total to zero as quickly as possible. (Preferably before turn seven if you’re facing Druid shenanigans.)

Though the Aggro Rogue archetype is still under refinement, we’ve opted to highlight fellow HearthstoneTopDecks contributor J_Alexander’s build, which has a bit more staying power on the board than some of the more “all-in” builds which curve out at three or four mana – it also served as the foundation of the Vicious Syndicate team’s build in their latest report at the time of writing this guide. You can also find alternative builds and card substitution options at the end of this article.

This is one of the best decks for Aggro Rogue in Scholomance Academy. The deck list might still get changed or refined – if it happens, we’ll update it here!

Find more versions of this deck type on our Aggro Rogue archetype page! 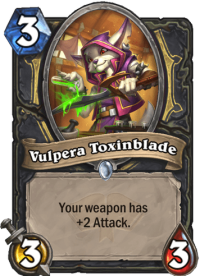 Aggro mirrors are a weird beast: you need to identify which of the two decks are a little bit slower and realize that it has to basically play like a control deck in that particular matchup. With Aggro Rogue in Scholomance Academy, your strategy is extremely build-dependent as you can construct the deck in a way that it only lodges burn spells from turn four onwards – which will always make it the more aggressive side – or something along the lines of the featured build, where you can afford (and should) play for the board more conservatively in the first few turns of the game before you completely push the opponent off the board.

As a Rogue player, you will always be incentivized to use your weapon as a removal tool and aggressively treat your health as a resource in these matchups – especially with something like Self-Sharpening Sword and its four durability. The ideal game state is one where you’ve managed to push your opponent off the board by turn four or so, then use your minions to ensure a clean board from that point on. Cards like Steeldancer and Jandice Barov should be able to value-trade with most of what your opponent has to offer, ensuring that you don’t have to take any more face damage as you try to secure board control – and letting you push your weapons directly into your opponent’s squishy health total, followed by copious amounts of burn spells and eventually the killing blow.

By the same token, you’ll probably know by turn four if you’ve lost the board for good, and you’ll need to accept the fact that dumping 8-12 damage into minion trades when you’re already behind will only serve to guarantee your defeat. These closely contested game states basically always boil down to a math exercise: what is “the clock” on both sides, how quickly will they be able to close out the game? What are your odds to find the perfect removal tool (Sap) or burn spell if you redraw your hand? If you choose to ignore your opponent’s board to set up lethal next turn, what do they need to have in order to punish you? If you choose to trade a minion instead of killing it with your weapon, does it change the math substantively enough to make it a worthwhile move? These are the sort of questions you will need to ask yourself as you navigate the treacherous waters of the aggro matchups as a Rogue player.

When and if you fall behind, you essentially should treat your minions as slow heat-seeking missiles aimed at the opponent’s face and have no illusions about getting more than one attack out of them. Since you want to close out the game as quickly as possible, that one shot should be directed straight at the dome rather than at the shiny distractions on the other side of the board. This logic should also serve you well in the control matchups: overtrading is how you lose. 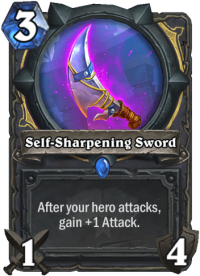 As we’ve discussed in the previous paragraph, don’t expect your minions to do the heavy lifting here. This is not a tempo deck but an aggro one, and the key difference is that it will be the burn damage which caps off your victory instead of repetitive minion damage and board control. If you trade too much, you will inevitably lose, and if you make a trade your opponent would make for you the next turn anyway, you’re missing out on invaluable face damage for zero benefit. Your minions will hit face once, get killed, but the next wave of onslaught should be ready by that time. Eventually, you will overwhelm the enemy – likely via merciless bombardment of Eviscerates or Sinister Strikes (depending on the build).

Once again, you need to keep an eye on the turn counter and have a good understanding of when your window of opportunity will close for good. The longer the game goes, the worse your chances are and the more risks you have to take to finish off your opponent. At a certain point, you can’t keep removing Priest minions to stop Apotheosis from crushing your hopes and dreams. Eventually, Druids will cast 30 mana worth of spells in a single turn, taunting and healing their way out of harm’s way. Warriors will find board clears and armor. Depending on their hand size, these critical points may come a turn earlier or later than you would normally expect – and it’s tough to pinpoint precise numbers so early in the metagame when builds are still in flux – but as a rule of thumb, if your opponent is still alive by turn eight, they better actually have the card you’re afraid of. You can’t give them too much credit or you will inevitably drop a few percentage points off your winrate.

One last thought: unlike the hyper-aggressive builds we’ll discuss below, this one (and the Vicious Syndicate version) can curve into some pretty brutal turn 4s and turn 5s as long as you found a way to set up a weapon. A 3-damage dagger (either via Deadly Poison or Vulpera Toxinblade) followed by Steeldancer and Jandice Barov can be a perfectly serviceable alternative to the stream of fragile stealthed 1-drops in these slower matchups.

Aggro Rogue offers a wide variety of possible build options in Scholomance Academy, and your deckbuilding choices will no doubt be influenced by how the metagame continues to develop over time. First, the small change: the Vicious Syndicate version of the build above features a copy of Lilian Voss over the second Sneaky Delinquent.

If you find them too slow against Druids (and you feel like the good Priest matchup isn’t enough of a compensation), check out Gallon’s Legend #6 build which aims to find extra burn with Pen Flinger shenanigans and basically curves out at three mana (with the exception of Frenzied Felwing which you won’t play at full price anyway). A comparison between the two builds show that finicky cards like Wand Thief and Voracious Reader are only worth including if you’ve cut other card draw sources, and currently it seems like the latter may even be a “trap card” for adventurous deckbuilders. Similarly, the inclusion of Wand Thief (or potentially Pharaoh Cat) basically necessitates running Shadowstep to make them worth your while. Your mileage may vary on the inclusion of these cards. If you want to further explore the Stealth package instead (and/or want to improve on your aggro mirrors), Ashtongue Slayer and Burrowing Scorpid are excellent options, though they will inevitably slow you down against control decks.