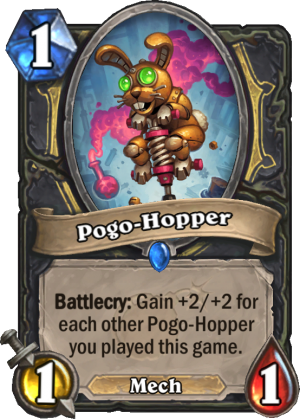 Pogo-Hopper is a 1 Mana Cost Rare Rogue Minion Mech card from the The Boomsday Project set!

Battlecry: Gain +2/+2 for each other Pogo-Hopper you played this game.

I have no clue whether this card is viable or not, but it will surely be fun. While it starts slowly, it has synergies with all kinds of Rogue cards. Now the Lab Recruiter reveal makes even more sense – those two have insane combo! Shuffling more copies of Pogo-Hopper into your deck is great. I mean, starting with the third one it’s insane tempo play. 2 mana 5/5, then 7/7, then 9/9 etc. We all know how powerful a big Edwin can be if your opponent has no answer, and this will be like Edwin after Edwin after Edwin. You force your opponent to have so many answers. If you draw well, it should even grow faster than Jade cards.

Now, there are two problems with a deck like that. First of all – you need some way to actually DRAW your first copy of this card. Elven Minstrel can help, but it doesn’t guarantee it. Maybe Witchwood Piper? But then you can’t play any 1-drops, and it can still draw another 2-drop. If you build your entire deck around it, you want to start the chains as quickly as possible. Starting with a 1/1, 3/3 and 5/5 in the late game is not great, the game will often be lost by that point. Another issue is that we still might need some more ways to copy it, because bouncing it is not good. Yes, you can Shadowstep or Youthful Brewmaster it, but all it does is giving it +2/+2. It might be good AFTER your Pogo-Hopper is damaged, so you can also heal it up, but ideally you will want cards that copy, such as Zola the Gorgon or Sonya Shadowdancer (but since it doesn’t have Rush or Charge, it might be difficult to combo them together). Valeera the Hollow is also big, because you can play every Pogo-Hopper twice, doubling the card’s potential. The deck would also be bad against Aggro, but that was always a problem with slower Rogue deck and I don’t think that anything can be done about it. It looks like it will be very difficult to pull off… but people, including me, will definitely try it.

The card can also be slotted into Quest Rogue, but I really don’t think that it will make another comeback after the nerfs. While the card is great after you finish the Quest, it doesn’t really help you finishing it, which is the main issue (because the deck is already powerful after you finish it).