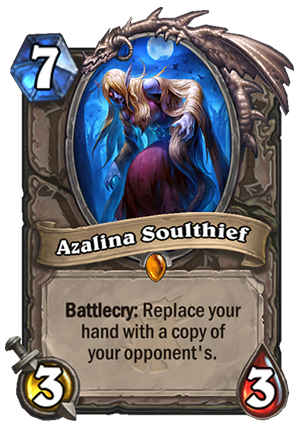 Azalina Soulthief is a 7 Mana Cost Legendary Neutral Minion card from the The Witchwood set!

Battlecry: Replace your hand with a copy of your opponent's.

The cards are always golden on the other side.
Tweet

Funnily enough, this is a card that you would want to play in an Aggro deck, if anything. It’s a bit like a neutral Divine Favor. The idea behind this card is that you run a fast deck and play versus a slower one. You run out of cards. while your opponent clears everything you play with all the AoEs and single target removals. Since you’re Aggro, they most likely could not drop all of their big minions etc. as they’re pretty slow. So you play this card on T7, copy your opponent’s hand, most likely with a few big threats, but now you have a huge health advantage. They still have to play defensively and you can go all in. Not to mention that it stalls for time until you draw more cards from your deck – potentially some burn etc. that will let you finish the game.

That’s the best case scenario. And in that scenario, this card would actually be solid. Yes, you have to pay 7 mana to drop a 3/3, but that 3/3 is giving you a MASSIVE refill. And as an Aggro deck, you might still be ahead on the board, so it might not be that bad in terms of the tempo.

However, as much as the best case scenario is quite appealing, an average case scenario really isn’t. This card is completely useless against Aggro, and most likely bad against Midrange. This alone makes it a questionable choice. But Divine Favor sees play, right? Well, yeah, but Divine Favor costs 3 mana, and that’s a huge difference. Even in slow matchups, this card is not guaranteed to get value. Best Divine Favors come around Turn 5, when your opponent didn’t have enough mana to dump their hand yet, and you’re already running out of steam. Sometimes even playing DF on Turn 3 is not terrible, this one would sit dead in your hand until Turn 7. It’s just super slow and super clunky. In general, you also prefer drawing cards from your deck. When you copy your opponent’s hand, you risk having some cards that require synergies, or Control cards that won’t help you a lot (like copying Psychic Scream and Greater Healing Potion against Priest – well, you can clear your own board and heal yourself, great).

I don’t think that this card is AS bad as some people think, but it’s definitely not good. It would be pretty insane at something like 5 mana, maybe even 6, but at 7 it’s just too slow. Cool card, but if anything, will most likely see play in meme decks.