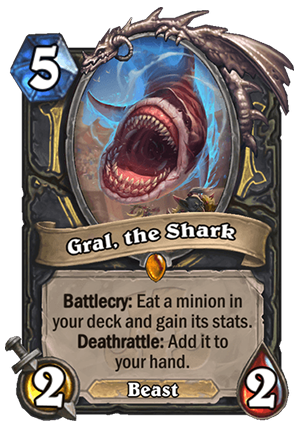 Gral, the Shark is a 5 Mana Cost Legendary Rogue Minion card from the Rastakhan's Rumble set!

Battlecry: Eat a minion in your deck and gain its stats. Deathrattle: Add it to your hand.

That’s a pretty interesting and unique effect. On Battlecry, you eat a random minion from your deck and you get it back with Deathrattle. So the best case scenario is eating a big minion, getting a huge body for 5 mana and then drawing a card when it dies. But how big exactly the minion has to be for this card to see play? Azure Drake should be a good point of comparison – it was a great card commonly used in Rogue, and it drew a card for 5 mana while leaving a body. Despite being only 4/4, he had some advantages – extra +1 Spell Damage and a guaranteed draw, which happened on Battlecry not on Deathrattle. So I’d say that 5/5 is too weak given that it doesn’t give you Spell Damage and draw (as well as stats) can be Silenced + it’s delayed (the difference between Battlecry and Deathrattle draw can be huge, especially in top deck scenario). 6/6 is probably the bare minimum for this kind of effect, with 7/7 starting to look solid. So you need to eat at least a 4/4 or 5/5 minion (or something similar, like 3/5, 5/4 etc.) for it to make sense.

And that’s actually a big reason why this card even if it sees play, will see play only in a very specific deck, something like “Big Rogue”. Because realistically, you would never want to put it in Odd version, with LOTS of smaller bodies (1/2, 2/1, 2/2 etc.). Even the Tempo and Miracle versions run a lot of small minions, such as Fire Fly, SI:7 Agent or Edwin VanCleef (remember that it’s 2/2 at the base level), so that’s also not good.

Additional use I can see is to “tutor” a certain minion. Let’s say that you play Malygos Rogue, with only a few minions, including Malygos and Kobold Illusionist. Getting Malygos, for example, would be quite insane – 6/14 minion immediately that draws Malygos on Death. The problem here is that if Gral gets silenced or transformed, the eaten minion is just gone. Forever. You can’t get it back, potentially ruining your entire win condition, so I wouldn’t necessarily want to put it into a combo deck.

And finally, you could sort of run a cheese deck, where you only play insanely big minions, such as The Darkness. Now, you drop this on T5 and have a 22/22 minion. If your opponent has no Silence or removal, you win the game. However, basing your entire strategy around this seems foolish. It’s a bit similar to the Spell Hunter with Barnes + Y'Shaarj, Rage Unbound, but the Hunter build had a good base to play only spells. Rogue doesn’t – the class is spell-heavy, but it still needs minions to win most of the time (Hunter could summon minions with spells, Rogue can’t).

And again, this is Rastakhan’s Rumble theme. This is a card with very high potential in a specific deck, but such deck doesn’t exist or isn’t good right now and it doesn’t look like it might never be good. If you for some reason play Rogue build without any small minions, where the lowest stats on your minions are 4/4 or something like that, then yeah, by all means, go ahead and play Gral, the Shark. But if that’s not the case, I don’t think that he’s good enough. 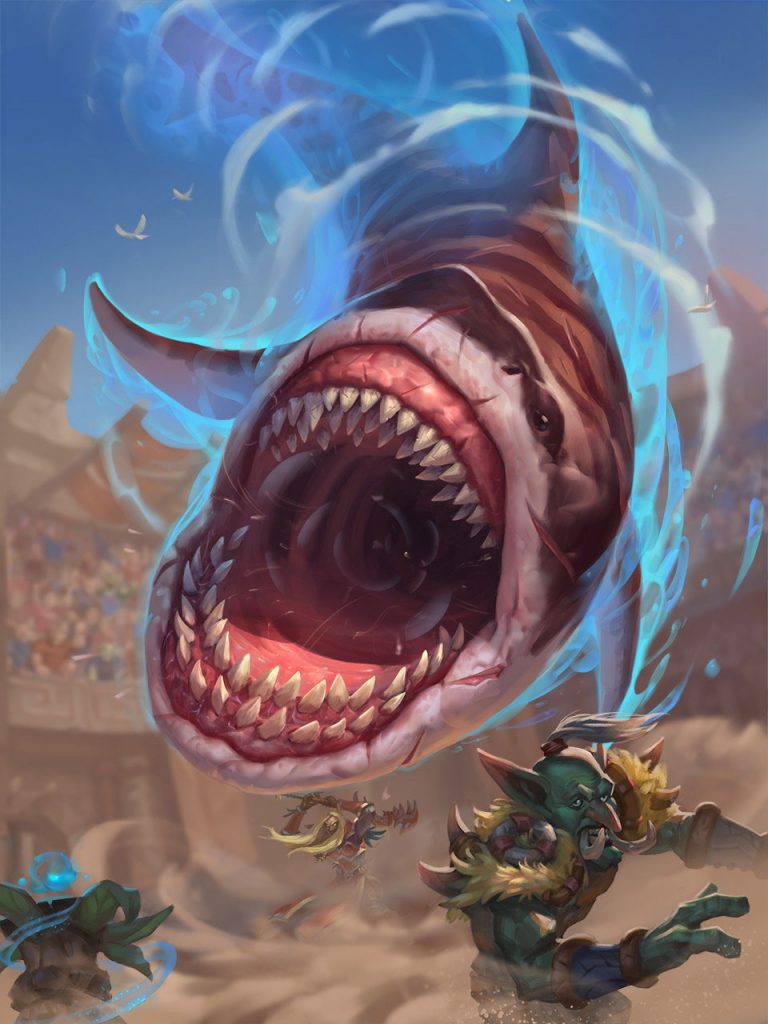