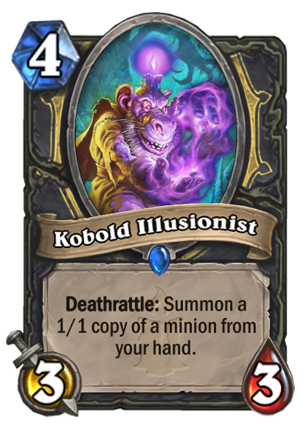 Kobold Illusionist is a 4 Mana Cost Rare Rogue Minion card from the Kobolds and Catacombs set!

Deathrattle: Summon a 1/1 copy of a minion from your hand.

Superficially, the effect looks a lot like that of Barnes and actually complements it for the “big” style of deck, allowing you to Barnes out things that you have already drawn. Unfortunately, the subtle differences in how it’s activated mean a lot here, because having it as a Deathrattle is a much bigger downside than normal. Most Deathrattles usually trigger during the opponent’s turn, which means that the opponent will have priority while the 1/1 is being summoned. 1/1s are trivial to remove for just about any class, especially with any amount of board presence, so it will be extremely difficult to get value because it won’t work with classic big minion effects such as powerful Battlecries, static auras and EoT effects, on top of having to play an understatted/overcosted minion. It works best with very very powerful deathrattle effects, however unlike some other classes, Rogue doesn’t usually have many of those. It’s worth noting that with something very powerful in hand to make a copy of, this card can become very strong in the late game when N'Zoth, The Corruptor brings back two copies of it. It gets a lot better when that deathrattle is happening on your own turn.